in Buckhead are among the new tastes

to savor and anticipate.

SMOKED MEATS come to Alpharetta and lobster bellies to Lenox Square, while new life reaches Colony Square and the Atlanta BeltLine. It’s all Food for Thought.

The Del Frisco’s space is Lone Star State-sized, an 11,000-sq. ft. stunner by the Johnson Studio that begins with a dramatic ascending entrance and uplighting that illuminates a tunnel of 2,200 bottles of wine. Another 2,500 bottles of wine “float” around the space in a sprawling exposed cellar.

The chain eatery’s menu features USDA Prime wet- and dry-aged cuts, including the namesake “Double Eagle Steak,” a 32-ounce, 45-day dry-aged, double bone-in prime ribeye. Carnivores can also choose a rare marbleized Wagyu steak — Japanese A5, Australian Wagyu or a cut from Rosewood, Texas. Double Eagle also flies in seafood daily, has an ocean of fancy wine and cocktails, and a butter cake that’s one of the best non-chocolate desserts around. …

If you can’t get your claws on enough fresh lobster, head to Lenox Square mall and COUSINS MAINE LOBSTER. Two cousins from the Northeast started the lobster-centric food truck four years ago in Los Angeles. They soon found themselves on national TV, pitching the idea on “Shark Tank,” the ABC competition show for budding entrepreneurs, where they landed enough funding to go nationwide.

Strap on your bib and order lobster rolls — Maine style (chilled with a touch of mayo) or Connecticut style (served warm with butter and lemon), plus lobster tacos, a lobster B.L.T., lobster grilled cheese, lobster tots and lobster bisque. Clams, crab and shrimp also appear on the menu but clearly, the lines out the door are for the lobster rolls, heaping piles of lobster belly meat stacked in perfect hotdog-style buns, steamed just the way they should be.

The redeveloping COLONY SQUARE in Midtown Atlanta has landed its showcase restaurant. Developers of the $160 million renovation say ISELLE KITCHEN + BAR, an Italian spot, will open in fall 2019. The menu will feature ricotta-stuffed squash blossoms, speck-and-blueberry bruschetta, seared Ora king salmon and burrata gnocchi. Iselle will join a 28,000-sq. ft. food hall and several other new restaurants as Colony Square tries to reassert its relevance in a sea of new intown mixed-use properties. … 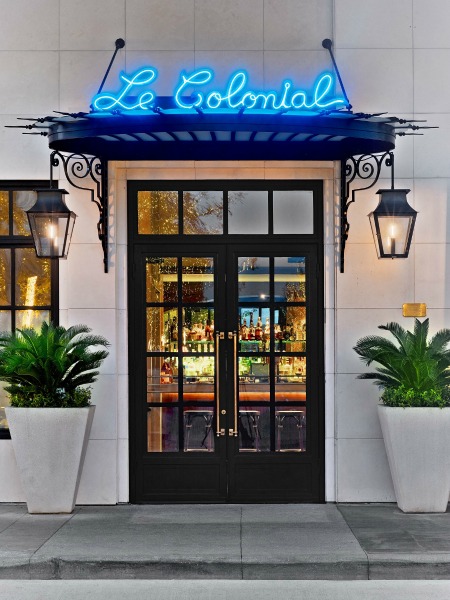 LE COLONIAL, an upscale French-Vietnamese spot, comes to the SHOPS AT BUCKHEAD in spring 2019 from the owner groups behind Le Bilboquet (also in the Shops) and Umi (on Peachtree Road). Le Colonial is already open in Chicago, Houston, New York and San Francisco, and features what are described as “romantic, turn-of-the-century, tropical environments.” Atlanta’s version will reportedly be the most modern interpretation of that concept. Look for such specialties as Bo Luc Lac Shaking Beef, crispy wild-caught red snapper and spicy yellowfin tuna tartare with soy caviar and taro chips. …

RYAN GRAVEL, the godfather of the Atlanta BeltLine, will open a restaurant called AFTERCAR on the Eastside trail. Look for it in the still-to-come Telephone Factory Lofts. Details on Aftercar’s theme and menu aren’t clear, but it’s described as a “retro-future BeltLine social house. A late-spring, early-summer 2019 opening is projected. Aftercar will sit adjacent to, and share profits with, Gravel’s Generator, a nonprofit urban development think tank.

Say so long to CHEEKY, the Mexican taqueria and sports bar that shuttered on Roswell Road in Sandy Springs after about two years of cervezas and soccer. But worry not, a Greek eatery named SANTORINI will take its place. Santorini is a full-service Greek taverna from GEORGE TSELIOS, who owns Gyro City Grill and is a founder/former partner in the Landmark and Marietta diners. …

Midtown’s wild and wacky party bar, FLIP FLOPS, purveyor of frozen daiquiris named Jet Fuel, the Gator Hater and Horne Hurricane, has had its last call. The 1920s Crescent Avenue bungalow was, to some, a shrine to tacky, beachy fun. To others, it was a cheesy eyesore. …

And finally, the 80-year staple S&S CAFETERIA has closed its last Atlanta outpost. The family-owned dining institution known for Southern cooking served its last bit of chicken and dumplings at the end of September. Six other S&S locations still operate outside metro Atlanta, including one in Augusta, two in Macon, and single locations in Greenville, S.C.; Charleston, S.C.; and Knoxville, Tenn.