Accolades continue to roll in for the nearly year-old Staplehouse restaurant in Atlanta’s Old Fourth Ward. This month Bon Appetit magazine named it the best new restaurant in America, ranking it atop its 10-best list.

In doing so, Bon Appetit wrote: “The story of how Staplehouse came to be will tear you apart. But after you eat here, it will build you back up. Welcome to the best new restaurant of 2016.”

Staplehouse was, and is, the dream of husband-and-wife Ryan and Jen Hidinger, who, in 2009 began a series of private supper club events. Their dream of a brick-and-mortar eatery was put on hold in December 2012 when Ryan was diagnosed with terminal gallbladder cancer. 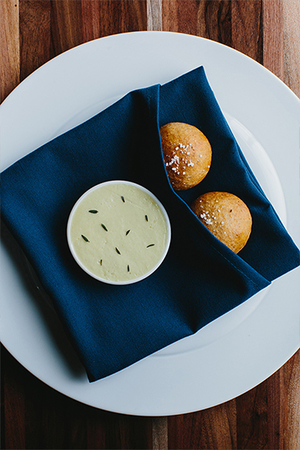 Staplehouse describes itself as a casual neighborhood restaurant, with a menu that changes regularly — by season, by the mood of the kitchen and by what farmers have available. It’s a for-profit subsidiary of The Giving Kitchen, a nonprofit that serves those in need in metro Atlanta’s restaurant community.

Walk-ins are always welcome at the bar (spots fill up quickly), but if you want a table inside the restaurant, it has no openings until October. Very few patio reservations remain for September as well.

Among its many honors, Staplehouse was one of five finalists for this year’s James Beard Foundation’s best new restaurant award. You’ll find it at 541 Edgewood Ave. SE. Reservations can be made online HERE. Information at 404.524.5005.