Looking for a favorite pie flavor? You’ll find it here.

With the arrival of Waitress and all its talk of pie, I got to thinking: “Where do local pie-o-philes find the best slices?” I set out to find the best pies and pie shops in Metro Atlanta, and came up with five frequently recommended places, including one for gluten-free pie lovers! My less-than-scientific — but more-than-tasty — investigation took me to Alpharetta, Duluth, Kennesaw, Sandy Springs, and Woodstock, among other stops. 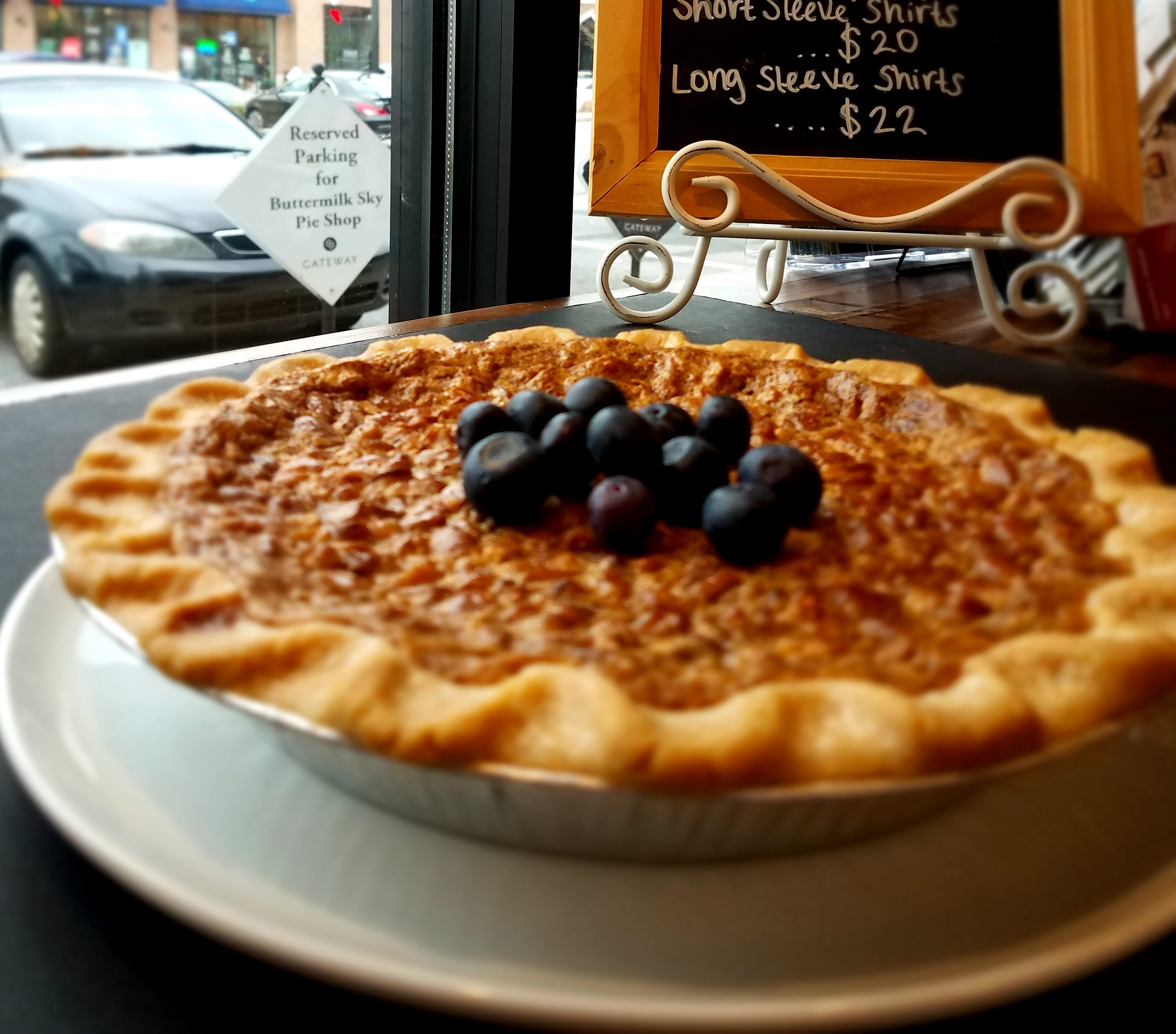 Buttermilk Sky’s Kimmie Chung wants her shop to be the go-to guilty pleasure for everyone in Atlanta. Customers aren’t arguing. “This really is my favorite pie location,” customer Renon Bosarge told Chung as he left the store with a smile and a 9-inch pie. Chung says she opened the Southern-themed Buttermilk Sky in Sandy Springs to follow her entrepreneurial dream of owning a coffee shop. Each of the eight pies on the regular menu is homemade and baked daily on-site. Mainstay favorites include “I-40 Pecan,” chocolate, and “Granny’s Apple.” Seasonal flavors are occasionally available, and the shop offers something called Cloud 9 — a mini pie with ice cream served in a jar so you get both treats in every bite. Pies can be ordered online and picked up in store or shipped. The shop’s menu also includes beverages including coffee, Coca-Cola products in glass bottles, and 1950s-style pints of whole milk. If you find yourself away from home with a hankering for a Buttermilk Sky pie, know there are at least 15 more locations in Florida, Mississippi, North Carolina, Ohio, South Carolina, Tennessee and Texas. Knoxville is home to the original location. 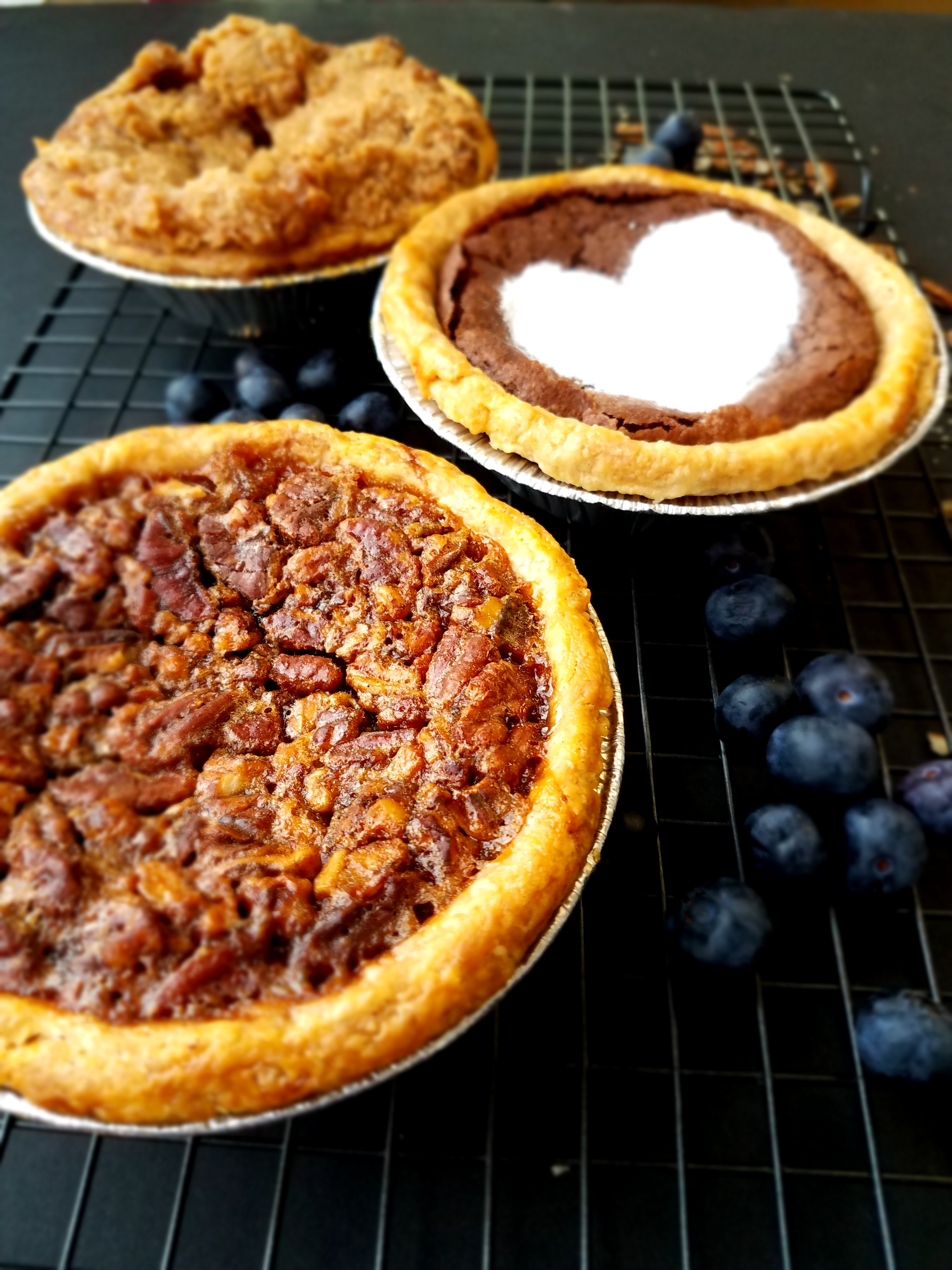 When you walk into Crave Pie Studio on Duluth’s downtown square, pause a moment to take in the smells that surround you. Customers crowd a robust pastry cabinet where Briana Carsons’ artisan pies sit on display. Crave is about the experience of pie, says Carsons, known as the “pie-vangelist.” The shop purposefully offers small bistro tables and no Wi-Fi. “I want people to come in and disconnect, drink coffee, eat pie, and have conversations,” says Carsons. “When customers come in, they smell the butter and sugar and see people cooking. It transports them to a different place,” Carsons says. “If they come in grumpy, they leave a little happier. Pie really does do that.” Carsons opened Crave almost seven years ago after being laid off from a corporate telecommunications job. She eventually enrolled in culinary school, following a lifelong passion. Today, Crave’s menu includes mini and full-size pies in chocolate pecan bourbon, maple pecan, lemon chess, and chocolate chess with a heart-shaped dusting of powdered sugar, among others. Savory pies and quiches are served, too. 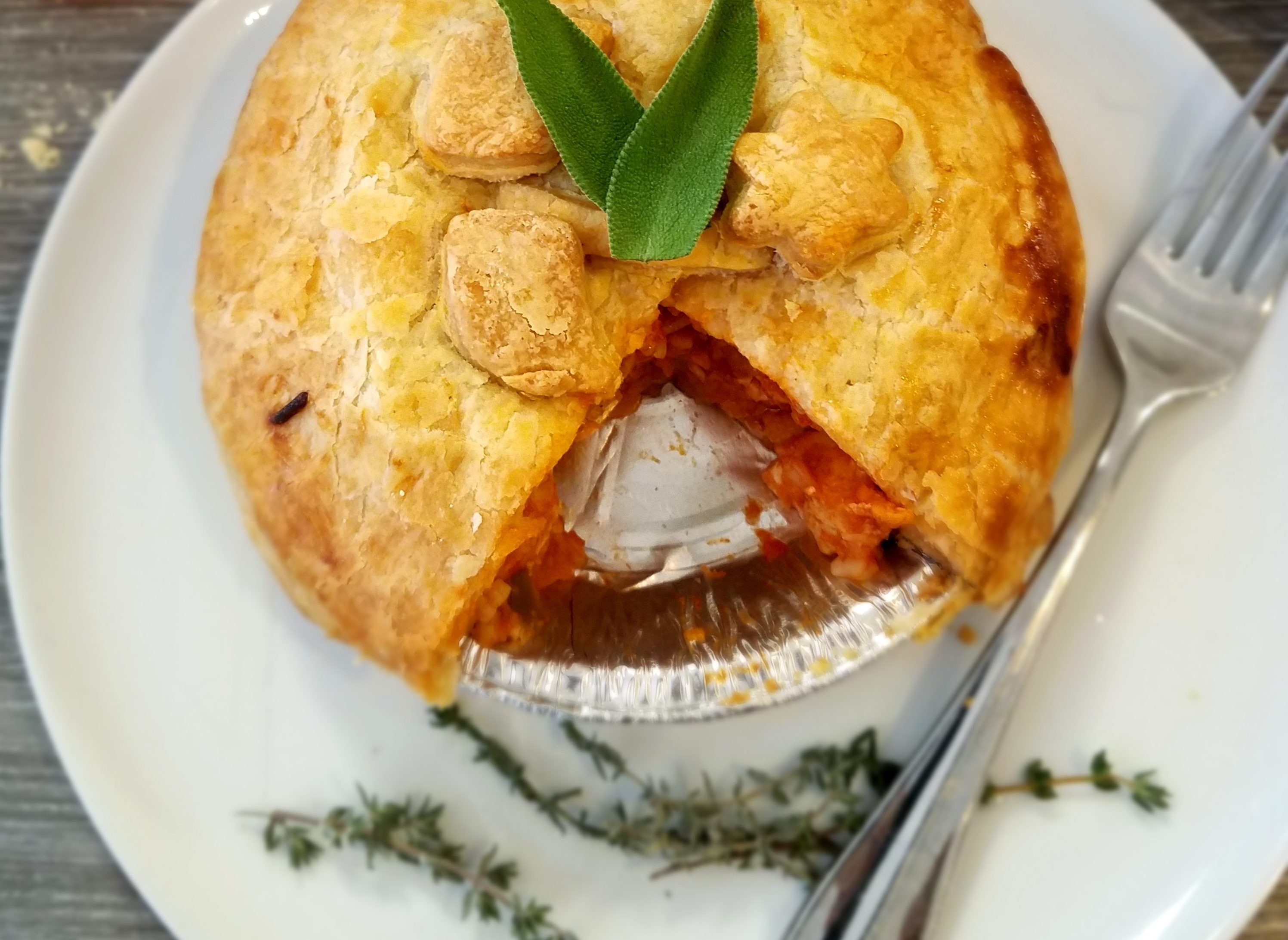 Paul’s Pot Pies opened on the Marietta Square in 1984 as a traditional comfort food café. One menu item consistently earned rave reviews: the chicken pot pie. “People loved it, and still do,” says Paul Luberkazzi, a classically trained chef and Culinary Institute graduate. When customers began ordering full-sized pot pies, Luberkazzi turned his café into a take-and-bake retail operation. “My pies have probably been served and transported to 35 states by customers who want to take them back home,” says Luberkazzi, “which says a lot for a little pie operation in Marietta.” The menu features more than a dozen options including BBQ, classic chicken, chicken curry, Italian sausage, jambalaya, pot roast, seafood chowder, turkey, and vegetarian. Both the Marietta and Kennesaw locations of Paul’s Pot Pies have large commercial kitchens in which the pies are baked fresh each morning. 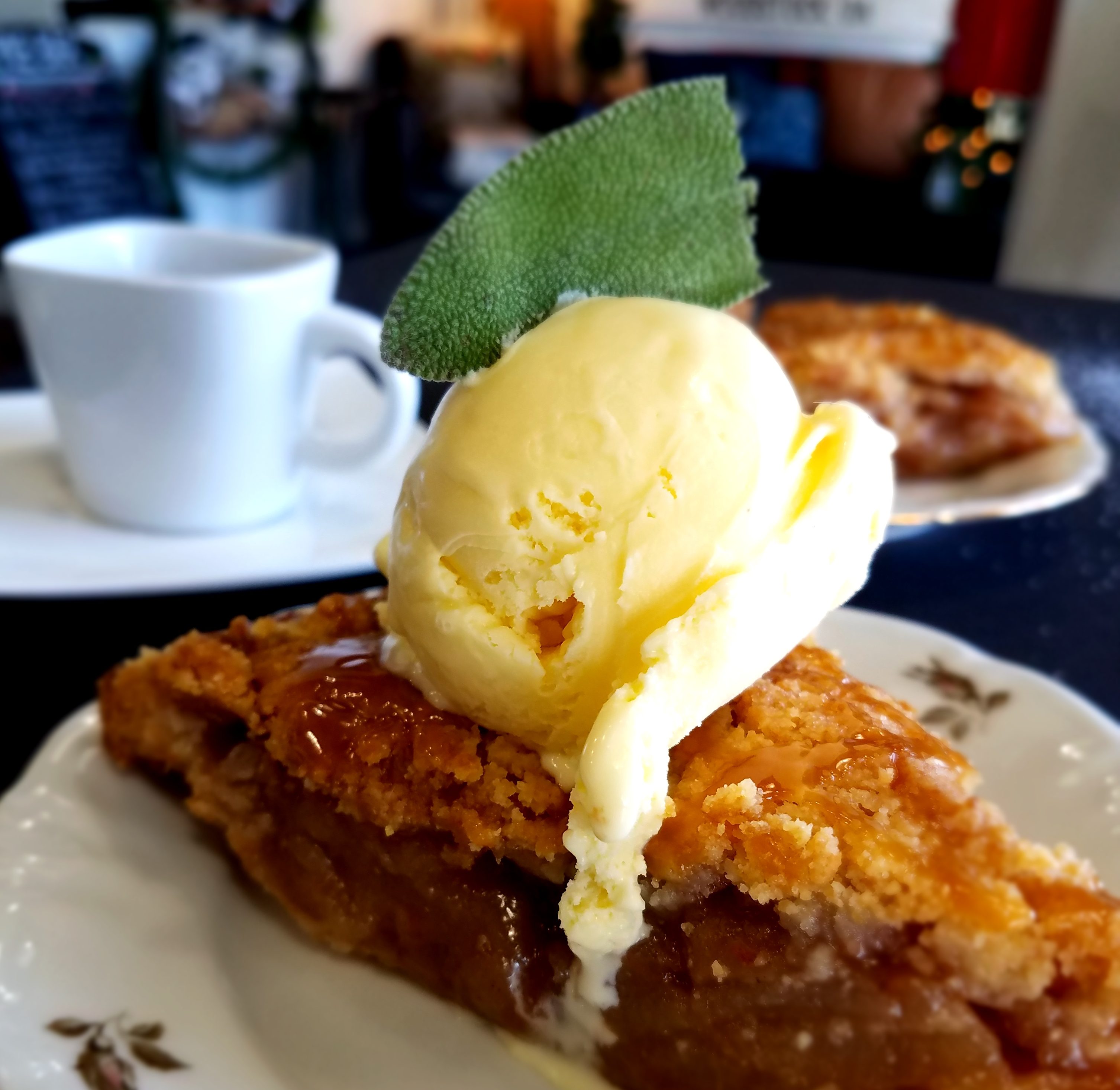 Pie Bar owners Lauren and Cody Bolden have been sweet on each other since high school. After college, marriage, and good careers in non-culinary fields, they decided to keep it sweet by baking and selling homemade pie for the masses and opened their shop in 2015.  “We are really fortunate to have the community supporting us, because we don’t sell something people have to have,” says Lauren Bolden, who is also Pie Bar’s chief recipe artist. “We want Pie Bar to be about the atmosphere,” she says, “It’s the nostalgia, it’s the quality of pie, it’s the total experience.” Along with a great atmosphere, the shop offers both sweet and savory pies, including customer favorites bourbon chocolate pecan, salted apple caramel streusel, and rosemary chicken pot pie. Currently, the Boldens are in the midst of expanding Pie Bar’s offerings nationwide with Pie Provisions, a pie-in-a-box item sold by 60 independent retailers. Encore readers Andy Berardi and Valarie Sellers are among her biggest fans. Sellers calls the Peanut Butter Pie “amazing.” Berardi says the shop is “by far the best in Georgia,” citing the diverse variety of flavorful pies. 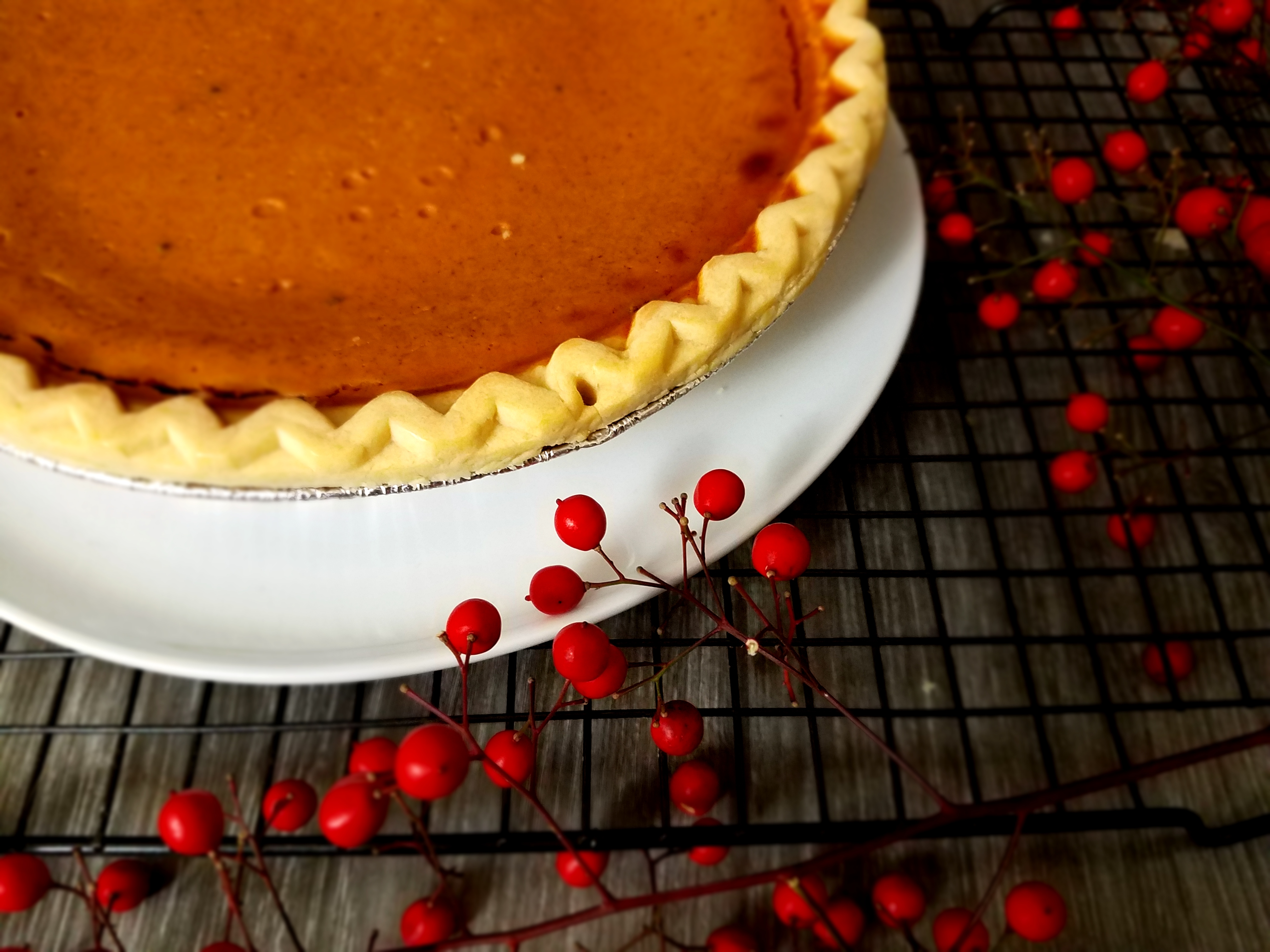 Bonnie Owings began experimenting with gluten-free baking long before gluten sensitivities were commonly understood. Twenty years ago, she was a stay-at-home mom and former nurse practitioner with arthritic pain in her hands who started exploring alternative recipes. “I didn’t know anything about the gluten-free world back then,” she says. “It was a journey to figure out my gluten sensitivities and relearn how to eat and cook.” Owings explored baking substitutes and eliminated wheat, barley, and yeast from her favorite treats. Before long, she was inundated with orders for her gluten-free baked goods. The Sandy Springs bakery, her first of two locations, opened nine years ago. Owings offers her popular pumpkin and pecan pies throughout the year, along with other pie flavors and baked goods. Everything else in her shop is always dairy-free, paleo-friendly, and vegan.

Author’s Note: In addition to the five shops described above, our pie lovers – er, researchers – found it important to note that Encore Atlanta readers are extremely fond of THE PIE HOLE in Roswell (openyourpiehole.com, 678-461-3776).