The Atlanta Opera has announced their return to the stage with four mainstage productions planned for the Cobb Energy Performing Arts Centre and two planned as part of their Discovery Series presented in their Big Tent venue.

Kicking off in November, the four mainstage productions are: Handel’s JULIUS CAESAR IN EGYPT, Gilbert and Sullivan’s THE PIRATES OF PENZANCE, Rossini’s BARBER OF SEVILLE, and THE (R)EVOLUTION OF STEVE JOBS, written by Mason Bates to a libretto by Mark Campbell. This follows a season of productions in the Big Tent, which was custom built out of the necessity to keep audiences, performers and crew safe during the pandemic, but proved popular beyond all expectation.

It was the company’s Discoveries Series, dedicated to mounting adventurous new productions in alternative spaces, that provided the inspiration for the widely praised Big Tent performances, and the venue fittingly returns this season for the Discoveries Series “Come As You Are” festival (June 2-19, 2022), comprising a production of the blockbuster musical CABARET performed in repertory with the critically acclaimed chamber opera CABARET.

In the words of Atlanta Opera Artistic Director Tomer Zvulun

“We believe that what unites us is far greater than what divides us. CABARET and AS ONE take place a century apart: one in the early 20th and the other the early 21st. But they are about the same theme: we are all different, but as human beings we are much more similar than we are sometimes told. History proves again and again that great dangers await us if we choose to focus on what separates us rather than what unites us.

“During the pandemic, the Big Tent has come to symbolize unity. A safe place, where we can come together as a community and enjoy live performance regardless of the turmoil outside. We look forward to coming together again under the big top to enjoy these two masterpieces.”

The Atlanta Opera’s production of CABARET is adapted from the 1998 Broadway revival that ran for more than 2,377 performances at Studio 54 in New York. Zvulun will direct and James Lowe, music director and conductor of the Tony Award-winning Broadway revival of ANYTHING GOES with Sutton Foster and Joel Grey, will conduct members of The Atlanta Opera Orchestra. Award-winning set designer Alexander Dodge will transform The Atlanta Opera’s Big Tent into the Kit Kat Klub, a decadent cabaret where singer Sally Bowles entertained Berlin’s elite in the 1930s. Erik Teague, the designer responsible for the whimsical costumes in this past spring’s production of THREEPENNY OPERA, will handle the costumes.

A versatile singing actor equally capable in opera houses and on Broadway, Curt Olds will sing the role of the flamboyant Emcee. He has been seen in productions ranging from Don Pasquale and The Magic Flute to musicals such as Sondheim’s A LITTLE NIGHT MUSIC, THE THREEPENNY OPERA, and Broadway’s RIVERDANCE. Hailed by Opera News as “a wonderful singing actor, as adept in pointing dialogue as in phrasing song,” Olds most recently performed the role of Monsieur André in the world tour of THE PHANTOM OF THE OPERA.

Actor and tenor Anthony Laciura will sing the role of Herr Schultz, the elderly fruit shop owner. With more than 800 performances at the Metropolitan Opera, Laciura has taken his operatic skills around the world, singing supporting roles in many of the best-known operas in the canon, including THE MARRIAGE OF FIGARO, THE MAGIC FLUTE, CARMEN, TURANDOT, and FALSTAFF. From 2010 to 2013 he was seen in the HBO television series Boardwalk Empire as butler Eddie Kessler.

Further casting has yet to be announced.

Running in repertory with CABARET will be the Atlanta premiere of the critically acclaimed chamber opera AS ONE by Laura Kaminsky, “one of the top 35 female composers in classical music” (Washington Post), in which two voices-Hannah After (mezzo-soprano) and Hannah Before (baritone)-share the part of a sole transgender protagonist. Kaminsky’s music is set to a libretto by Mark Campbell and transgender filmmaker-librettist Kimberly Reed, who also created the multimedia opera’s film. Since its world premiere at the Brooklyn Academy of Music, AS ONE has become the most-produced modern opera in America.

Transgender baritone Lucia Lucas-recognized as a “rising star” (The Guardian) with “a voice that can rattle the rafters with its power, without ever sacrificing subtlety of expression” (Tulsa World)-sings the role of Hannah Before. Lucas sang the title role in DON GIOVANNI with Tulsa Opera in 2019, becoming the first trans woman to sing a principal opera role on an American stage. The performance was the subject of James Kicklighter’s feature-length documentary THE SOUND OF IDENTITY.

Blythe Gaissert, an American mezzo-soprano and expert in new classical music, will sing the role of Hannah After, a role that she has sung in eight previous productions, including the 2019 version at New York City Opera. Known for her “rich, earthy voice and dramatic skills” (Broadway World), as well as impeccable musicianship and technical prowess, Gaissert is “impossible to ignore” (Denver Post).

During last fall’s Big Tent Series, The Atlanta Opera’s first foray in its bespoke venue was hailed by ArtsATL as “a welcome breath of fresh air, literally and figuratively.” Regardless of the status of the pandemic next spring, for the Discoveries Series productions the Big Tent is the ideal choice. Zvulun explains:

“Over the past year, the Big Tent has become our favorite ‘home away from home.’ We have thoroughly enjoyed performing in a venue that we can put almost anywhere and easily turn into a Texas saloon on one night and Victorian London the next. And the audience response has been out of this world. I don’t think anybody is ready to see the Big Tent go into storage-certainly not me.” The Big Tent will be pitched on the grounds of The Atlanta Opera offices at 1575 Northside Drive, less than a half-mile off of I-75.

Tickets for CABARET start at $50 while tickets for AS ONE start at $15. Tickets go on sale Tuesday, August 17 at 10am and can be purchased at atlantaopera.org or by calling 404-881-8885. Both operas will be performed in English with English supertitles.

Visit AtlantaOpera.org for more information about the entire season. 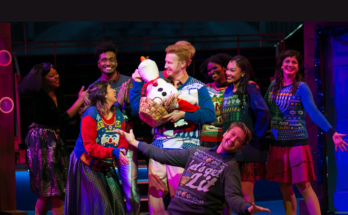