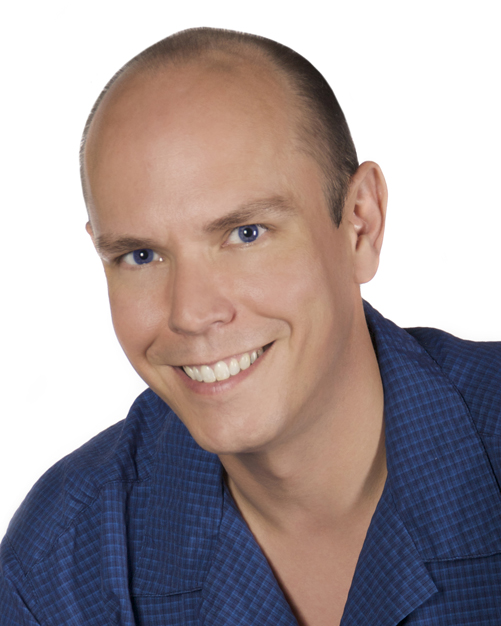 In brief: Googie, 40, can be seen in the Alliance Theatre’s Next to Normal, which won the 2010 Pulitzer Prize for Drama. He plays Drs. Fine and Madden, who treat the leading lady’s mental illness. He also develops new works with Atlanta’s Out of Hand Theater (Meds, The Break Up). Next to Normal begins its final week tonight and runs through Sunday. Details, tickets HERE.

Googie? Real name Geoffrey. Last name pronounced YOU-terr-hart. “Googie” goes back seven or eight years, when he and two other Jeff/Geoffs auditioned for Kiss Me, Kate at Stage Door Players. All three were hired. The director, attempting to keep them straight, created nicknames. He became “Geoff Guggenheim,” which morphed into Googie. “It’s taken on a life of its own,” says, well, Googie.

Lives now: Doraville, just OTP. With wife Barbara Cole Uterhardt, who runs OnStage Atlanta, and cats Runt, Jane (for Calamity Jane) and Fletcher (after “Murder She Wrote’s” Jessica Fletcher). He moved to Atlanta with his family at about age 18, when his dad retired from the Navy.

Where you’ve seen him: At Aurora Theatre in Clyde ‘n Bonnie: A Folktale. At Atlanta Lyric Theatre in Rent and Little Shop of Horrors. At OnStage Atlanta in The Drowsy Chaperone and The Wild Party. At Actor’s Express, ART Station, the Center for Puppetry Arts, Dad’s Garage, Georgia Ensemble Theatre, Horizon Theatre, the New American Shakespeare Tavern, Out of Hand Theater, Theater Emory and Theatrical Outfit. He won a 2006 Suzi Award (Atlanta’s version of Broadway’s Tonys) as best supporting actor in a musical for Love Jerry at Actor’s Express.

First time onstage: Age 7 or so in either Super Frog (playing the title role) or as the Turtle Dove Salesman in The Twelve Days of Christmas. Family members dispute which came first.

Why theater: “There’s nothing like being someone else for a couple of hours. You can be, or do, anything and then get a free pass, because it’s theater, it’s your job.”

Day job: Works two or three days a week as a standardized patient for fourth-year medical students. It helps pay the bills. (“Bend over and cough?”)

Fave theater memory: In Memphis, when he worked backstage during a production of Barnum. He was able to peek around the curtain and watch his dad  start Act 2 by walking down the aisle with his tuba leading the jaunty “Come Follow the Band.”

Best thing he’s seen recently in which he wasn’t involved (sort of): The Best Little Whorehouse in Texas at OnStage Atlanta (“I hope it doesn’t sound self-serving … “) and last season’s August: Osage County at the Alliance.

Up next: He travels with Next to Normal, a co-production with Geva Theatre, to the Rochester, N.Y., playhouse in January and February.