At Cirque du Soleil, even cleanup is a death-defying act. Employees of the Canadian-based circus wash the exterior of the blue-and-yellow tent from top to bottom, while repelling on ropes and carrying hoses. There’s no net, of course. 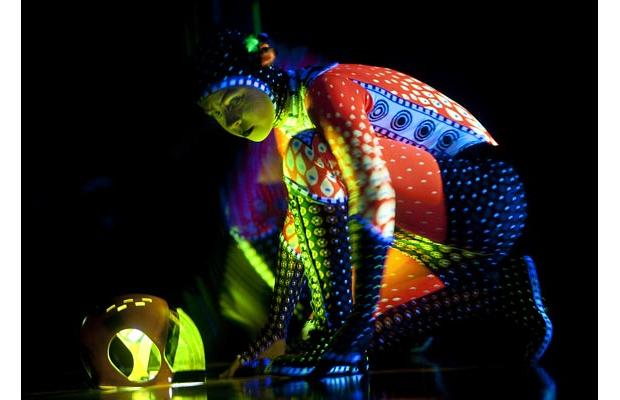 Audiences recognize the tent, officially known as Le Grand Chapiteau, as the site for Cirque du Soleil’s world-renowned performances. The smaller artistic tent adjacent to Le Grand Chapiteau goes almost unnoticed, but serves as the incubator and training ground for Cirque performers. “In here, it’s always the same. We don’t feel like we’re in Atlanta,” spokesman Francis Jalbert says while providing a behind-the-scenes tour of the evolution-themed Totem, the latest Cirque show to come to town.

Cirque divides the artistic tent into regions: dressing rooms, where performers can spend up to an hour a day applying makeup; wardrobe, where costumes range from caveman to amphibian to glittering spaceman; and an open space with mats for acrobatic rehearsals, where muscular guys in warm-up clothes take turns tossing each other onto narrow bars.

‘ENGLISH IS WHERE WE MEET’

Totem, which emphasizes early human cultures and the natural world, opened in April 2010; about 98 percent of the original cast remains for the Atlanta leg. Its numbers are eye-popping: It has 120 employees and, with family members, includes 165 people from 22 countries. “We speak 11 different languages, but English is where we meet,” Jalbert says in his French accent.

In wardrobe, a seamstress attaches sequins to a shiny bodysuit. Each is custom-made for its performer with a 3-D scanner. There’s no “small,” “medium” or “large,” Jalbert says. Each garment has a life span of six months and shows an impressive level of detail. One, for example, features a tiny, real seashell at one corner that’s probably not visible to audiences. The show’s dangling “Crystal Man” features more than 4,000 individual pieces of reflective material attached to a set of black tights, so it resembles both a contortionist and a disco ball.

Despite its demands, the Cirque du Soleil organization doesn’t necessarily recruit performers from the circus arts. Most come from a sports background, like gymnastics. “After their competitive career,” Jalbert says, “Cirque offers a performing career.”

In some respects, Cirque du Soleil behind the scenes looks like any other busy but mundane backstage environment. Then you turn a corner and find juggler Greg Kennedy standing in what looks like a giant Plexiglas beaker, bouncing balls off the transparent walls in a dizzyingly rapid sequence. Kennedy was studying new ways to juggle, says Jalbert, and the Plexi cone helps him juggle horizontally, not vertically. Kennedy plays a Darwin-like scientist whose performance, “Manipulation,” looks like electrons whizzing around a nucleus. 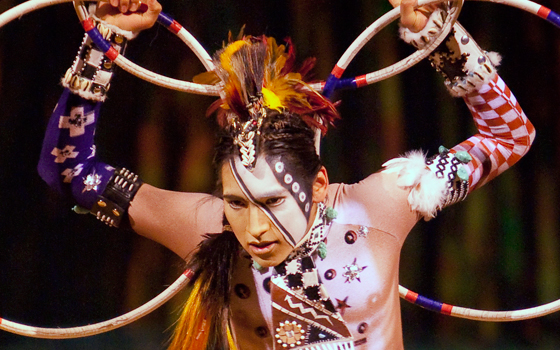 In addition to various clowns, acrobats and some astonishing balancing acts, Totem features recurring performances from Native American hoop dancers, who create shapes ranging from cubes to Olympic ring-style arrangements. Following their morning rehearsal, Eric Hernandez and Shandien Larance catch their breath at the artistic tent’s “red carpet area,” which includes sofas and a television. From here performers can watch their colleagues during the show.

Of all the acts in Totem, Hernandez’s favorite performers are the acrobats who work with the Russian bars. “I think it’s ridiculous, the things they do,” he says. “They jump I don’t know how far in the air and land on the exact spot every time — a bar less than six inches across.”

Larance won’t play favorites. “For me, it’s everyone. Everyone is so talented, everyone is perfect, and you never see mistakes in any of the acts. I think we’re the only ones with our feet on the ground most of the time.”

For Cirque du Soleil’s performers, watching their colleagues rehearse is the next best thing to a ringside seat.

Atlanta-based film and theater critic Curt Holman has won awards for his critical writing from the Association of Alternative Newsmedia and the Society of Professional Journalists, and in 2005 was a National Endowment of the Arts fellow in theater and musical theater.