‘Night of the Living Dead,’ ‘Iron Man,’ ‘Funny Girl’ and ‘Trolls’ among the titles lined up.

EIGHT MOVIES over two months, two sing-alongs, two 50th anniversaries and an untold number of popcorn boxes and, perhaps, toasty hot dogs. Those are a few of the anecdotal numbers behind the Fox Theatre’s annual Coca-Cola Summer Film Festival. 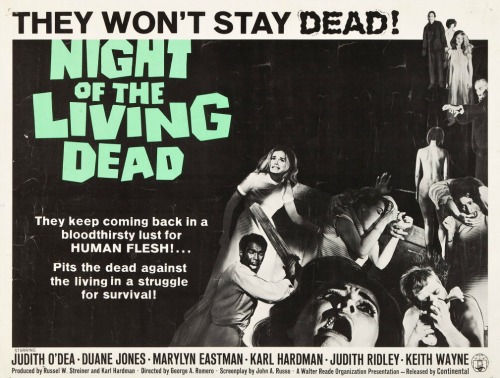 The fest opens July 27 with Night of the Living Dead  and closes Aug. 25 with the 7 p.m. screening of a movie still to be chosen. Count on every showing being huge — the Fox Theatre’s screen measures 26-ft. high and nearly 57-ft. wide.

The opening-night film and related festivities are fit for the undead, beginning with a 50th anniversary showing of Night of the Living Dead (10 p.m. July 27). In partnership with the ninth annual Atlanta Zombie Pub Crawl (July 28, age 21 and up only), zombie and non-zombie ticket holders can take part in a pre-screening costume contest as well as exclusive food and drink specials.

Zombie makeover stations ($5-$10) are available for moviegoers feeling a bit too … alive. Part of the proceeds benefit Team Fox, the Michael J. Fox Foundation in support of Parkinson’s Research.

In chronological order, the rest of the festival lines up like this:

FUNNY GIRL. 7:30 p.m. Aug. 2. A 50th anniversary screening of one of Barbra Streisand’s first movies. It tells the almost-true story of Ziegfeld comedian Fanny Brice and her star-crossed love affair with a gambler named Nick Arnstein (Omar Sharif). The supporting cast is a who’s who of 1960s-era character actors. The franchise began with the 1964 Broadway musical, which ran 3.5 years. Streisand and the show itself were nominated for Tony awards, both losing to Carol Channing and Hello, Dolly! Streisand made up for it a year later at the Academy Awards,  when her Fanny tied with Katharine Hepburn for best leading actress.

TROLLS. 2 p.m. Aug. 11. It’s Trolls versus Bergens in this 2016 animated feature from DreamWorks. The Trolls — small creatures who live in an almost perpetual state of happiness, singing, dancing and hugging all day — are discovered by the Bergens, who eat them. An escape is attempted, and then. …

GREASE SING-ALONG. 7:30 p.m. Aug. 23. Rama-lama-ding-dong! Return to the 1950s with this 40th-anniversary screening and join the T-Birds, the Pink Ladies, bad boy John Travolta and good girl Olivia Newton-John in a musical homage to simpler times. Were you born to hand jive?

MOANA SING-ALONG. 2 p.m. Aug. 25. This 2016 animated feature from Walt Disney Pictures tells the story of Moana, the strong-willed daughter of  a Polynesian village chief chosen by the ocean to reunite a mystical relic with a goddess. When blight strikes her island, Moana goes in search of a legendary demigod, hoping to save her people. The score comes from Lin-Manuel Miranda (In the Heights, Hamilton), Opetaia Foa’i and Mark Mancina.

Movie tours ($25) must be purchased with a movie ticket and are available before Night of the Living Dead, Iron Man, Funny Girl and the Grease Sing-Along. Details at 855.285.8499.