Those words describe the women-centered theater piece Revolt. She Said. Revolt Again, a play that lays bare the conundrums of being female in the 21st century. 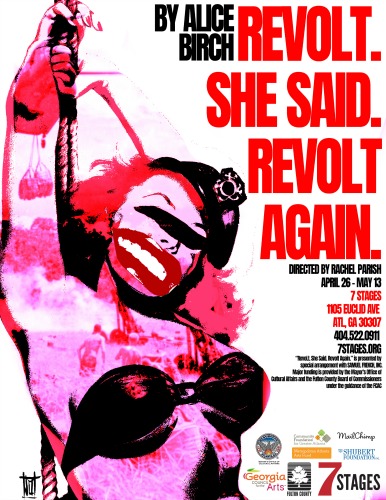 Because of the topic’s urgency, 7 Stages says, it will produce Revolt as the final show of its 2017/18 season, swapping out the annual interactive/immersive festival Curious Human Encounters.

In a statement, 7 Stages says it decided to produce Revolt  “to address the urgent mood in our community and nation surrounding issues of women’s rights and systemic prejudice.”

Atlanta audiences first saw Revolt, a 2014 piece by British playwright Alice Birch, in a staged reading at 7 Stages’ recent Home Brew play-reading festival. Audiences and staff were impressed with how boldly it addressed issues of systemic misogyny with humor and ferocity, and encouraged the company to move forward with a full production.

Revolt became a hit for England’s Royal Shakespeare Company before running off-Broadway in April 2016. In his review, The New York Times’ Ben Brantley said it “has a way of making you question everything you say when it comes to discussing women and their relationships with men, one another and a world in a state of unending upheaval.”

Revolt runs 70 minutes with no intermission and includes stage directions that say, “Most importantly, this play should not be well behaved.” Note that it contains descriptions of sexual assault fake blood and strobe lighting effects.