WEST MIDTOWN’S OUT FRONT THEATRE COMPANY continues to grow, adding a fifth show for its 2018/19 lineup. The season opens in October with the off-Broadway musical The View Upstairs and closes in May 2019 with the dark comedy The Secretaries from the Five Lesbian Brothers.

Before then, however, the company presents its Red Ribbon series (April 6-7), featuring staged readings of three plays from the early years of the HIV/AIDS epidemic. They are:

THE NORMAL HEART. 8 p.m. April 6. The Larry Kramer drama is set in 1980s New York, where a writer and his friends join forces to expose the truth about the emerging AIDS crisis to both the government and the gay community.

SAFE SEX. 2 p.m. April 7. Three one-act tragicomedies by Harvey Fierstein about how gay men connected and pursued relationships in the age of AIDS.

JEFFREY. 8 p.m. Saturday. Paul Rudnick’s comedy about a gay man named Jeffrey who decides to stop his sex-hungry ways and become celibate. Then he falls in love with the perfect guy. (Actor’s Express staged Jeffrey in its 1994/95 season.)

The readings are a collaboration with Living Room, a housing assistance program for those living with HIV/AIDS. Three-show packages are $50 and $75 (VIP); each reading is $20. Details, tickets HERE or at 404.448.2755.

The 3-year-old Out Front, founded by producing artistic director Paul Conroy, tells stories about the LGBTQIA+ community. It’s based at 999 Brady Ave. in West Midtown. Performances are generally at 8 p.m. Thursday-Saturday and 3 p.m. Sunday. For ticket information, go HERE or call 404.448.2755. 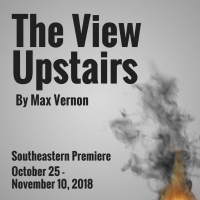 THE VIEW UPSTAIRS. Oct. 25-Nov. 10. Regional premiere. Meet Wes, a modern-day fashion designer who buys an abandoned building in New Orleans’ French Quarter and finds himself transported to a vibrant 1970s gay bar. His journey of self-exploration spans two generations of queer history. The musical by Max Vernon (book, music, lyrics) ran off-Broadway in 2017 and is based on the real-life events of a 1973 arson attack at the Big Easy’s UpStairs Lounge. “Channels a vintage camp that is all too rare nowadays,” wrote The New York Times in its review.  Entertainment Weekly called it “a moving homage to LGBT culture, past and present,” adding that “the show swells with heart.” 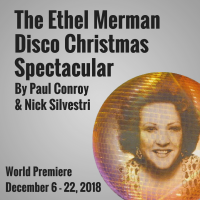 THE ETHEL MERMAN DISCO CHRISTMAS SPECTACULAR. Dec. 6-22. World premiere. Imagines what Ethel Merman’s unaired 1979 Christmas TV special would be like if set at Studio 54 the same year the Queen of Broadway released her infamous disco record. Includes Christmas songs set to a dance-floor beat and visits by the likes of Andy Warhol, Donna Summer and Truman Capote. Conroy wrote the script. Merman, as you might know, reigned on Broadway from the 1930s through the 1950s and beyond, headlining such musicals as Girl Crazy; Anything Goes; Red, Hot and Blue; DuBarry Was a Lady; Panama Hattie; Annie Get Your Gun; Call Me Madam; and Gypsy. 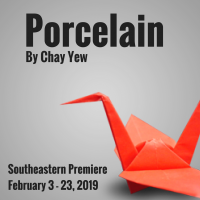 PORCELAIN. Feb. 3-23, 2019. Regional premiere. A provocative mystery by Singapore-born, U.S.-based playwright Chay Yew. John is a 19-year-old gay Chinese-British man in East London who’s discovered with the body of his Caucasian male lover in a men’s restroom. A crime of passion? A story that could come from today’s headlines? Porcelain premiered in London and debuted stateside in Los Angeles in 1993. “A lot of people want answers from the theater,”  Yew says. “The theater does not give answers.” His play, he says, poses questions he hopes will force audiences to  find their own answers. 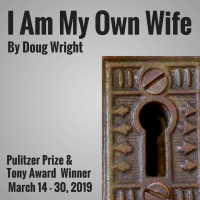 I AM MY OWN WIFE. March 14-30, 2019. A one-person show that tells the tale of Charlotte von Mahlsdorf, a real-life German transvestite who managed to survive the Nazis and East Germany’s communist regime. Doug Wright’s drama had a 2003/04 Broadway run that resulted in  a Tony Award for best play and the Pulitzer Prize for drama. The New York Times called it “both moving and intellectually absorbing.” (Actor’s Express produced I Am My Own Wife in 2007 with Atlanta actor Doyle Reynolds as Charlotte, a role for which he won a Suzi Bass Award.) 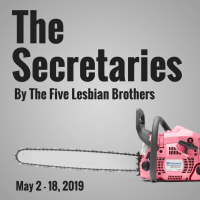 THE SECRETARIES. May 2-18, 2019. A satirical exploitation-horror script that takes an unflinching look at the warping cultural expectations of femininity. Pretty Patty Johnson is thrilled to join the secretarial pool at the Cooney Lumber Mill under the iron-fisted leadership of office manager Susan Curtis. Soon, however, the enforced diet of SlimFast, the strange clicking language between the girls and the monthly disappearance of a lumberjack has her concerned. The 1994 script is by the New York-based Five Lesbian Brothers, a theater company founded by writers and performers Maureen Angelos, Babs Davy, Dominique Dibbell, Peg Healey and Lisa Kron (Fun Home).