ROSWELL, ONCE A MILL TOWN, IS NOW GEORGIA’S 7TH-LARGEST CITY. TODAY IT MIXES PLENTY OF MODERN INTO ITS LIVING HISTORY. 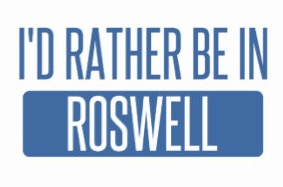 MENTION “ROSWELL,” and some folks will tell you it’s the place in New Mexico where aliens supposedly landed in 1947. Say it to ATLiens, and they’ll likely tell you that Roswell, Ga., is a pretty fine place to land.

Go 22 miles north of Atlanta and see that the Old South isn’t gone with the wind, not by a long shot, but that this once quaint mill town is yielding territory to a newer Southern sensibility. Whether you’re looking for Civil War history or haute cuisine, Roswell has a gracious plenty to offer and not just to the 94,000 people who call it home.

Now part of North Fulton County, Roswell once  was in Cobb County. Call it an early revolt against long commute times, but when residents tired of the four-hour horseback ride to the county seat of Marietta, they filed for cityhood. A charter for city incorporation was approved in 1854.

A Southern trio of historic homes — Barrington Hall, Bulloch Hall and Smith Plantation (now museums and event venues) — perch grandly on the green landscape, geography so fertile that the Cherokee called it the “Enchanted Land.”

Barrington Hall was named for Barrington King, whose family co-founding the colony that is now Roswell. Generations of King’s family preserved the property, a vast tract now whittled down to seven acres. The house is widely recognized as a prime example of Greek Revival Temple architecture. Take a self-guided tour and walk the only antebellum public garden in metro Atlanta.

See a play or a historic display at Bulloch Hall, the childhood home of Mittie Bulloch, Theodore Roosevelt’s mother. The museum room details life from the family’s arrival in 1838 and includes information about President Roosevelt’s 1905 visit. A chronicle of the Bullochs, a family bitterly divided by the Civil War, is included. Like most landed Southerners, they owned slaves, and the slave quarters bear a plaque of the names of those who worked and served on the property.

Smith Plantation was built in 1845 on 300 acres that includes a guest house, slave quarters, a cook house, carriage house and barn. Three generations of Archibald Smith’s family lived there and some of the original furnishings remain.

You’ll still see Civil War remnants outdoors. Hike into Old Mill Park to see the ruins of the Roswell Manufacturing Co., textile mills and blacksmith shop. Fully operational by 1839, it was burned by Union soldiers in 1864 when Gen. William Tecumseh Sherman ordered that 400 mill workers, mainly women and children, be charged with treason. Rebuilt after the war, it burned again in 1926. The park is open daily and includes a walking trail with a covered bridge and the picturesque Vickery Creek Falls. A monument dedicated to the “Lost Mill Workers of Roswell” stands at on Sloan Street.

Eat, drink and get scary

Restaurants of all kinds are interspersed with boutiques and galleries on Canton Street, essentially Roswell’s own Restaurnt Row. Period storefronts add the look of yesteryear but some of the eating spots are known for innovative contemporary cuisine.

The popular Osteria Matone, which opened three years ago, serves Italian food with a “when-in-Rome” feel. Dine casually in the osteria on the everything-is-fresh Neopolitan pizza or step into the trattoria and go full-on Italia. Choose from a changing menu of dishes like Agnello al Scottadito (grilled glazed lamb chops with mushroom risotto), duck-stuffed pasta or short-rib ravioli. Reservations recommended.

Adult beverages abound at Salt Factory Pub, which has an impressive beer and wine list, more than 40 bourbons and a few dozen choices of single malt scotch. That requires some decision-making before you move on to the menu of comfort food. Pair your drink with salmon tostadas or sip while you tuck into the chicken pot pie served in an actual pot. Fans often say this is the best pub they’ve ever eaten at. Another option, if you pretend Johns Creek is still part of Roswell: Altobeli’s Italian Restaurant and Piano Bar, where pasta comes with beef, chicken or veal and the music plays seven nights a week.

[MORE: WHERE TO EAT, SHOP AND GO WILD]

The Roswell Ghost Tour explores the city’s tumultuous past with a touch of the modern all year long. There are beer crawls in case you need liquid courage before you confront Casper and, on some of these 2.5-hour tours, your pet is welcome. Roswell’s haunted history has been featured on the SyFy’s channel “Ghost Hunters.”

Its 2017/18 lineup features the Caribbean-flavored musical Once on This Island; Morningside, a new comedy from Atlanta playwright Topher Payne; Tenderly: The Rosemary Clooney Story; Ken Ludwig’s A Comedy of Tenors; and a reprise of The Buddy Holly Story.