Georgians are safe, according to a report in Travel + Leisure magazine, but residents of Kentucky, Maine, Minnesota, Missouri, Montana, Oklahoma, Pennsylvania, South Carolina and Washington will have to use alternate ID forms (passports, military IDs or permanent resident cards) to pass TSA security checkpoints at airports, even for domestic flights. 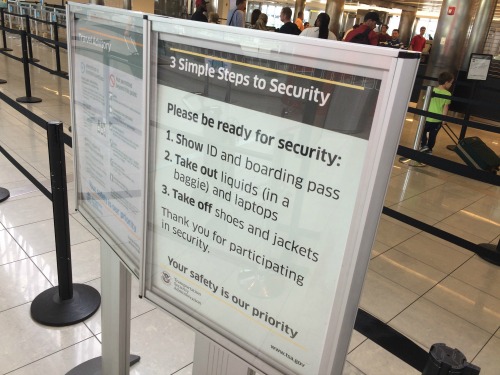 The IDs from those nine states don’t meet the federal government’s minimum security standards. And, according to the REAL ID Act of 2005, federal agencies like the TSA are prohibited from “accepting for certain purposes driver’s licenses and identification cards from states not meeting the act’s minimum standards.”

To pass those security standards, every ID applicant’s identity must be verified, anti-counterfeit technology has to be used in producing the card and background checks must be conducted on those who issue the driver’s licenses.

If the nine states on the list change their ID process, the government “may grant extensions or determine compliance for additional states as warranted,” the TSA said in a statement.

Travelers not from the nine states won’t be affected by the change in 2018. But by 2020, all travelers must have identification in compliance with REAL ID or they will not be allowed through TSA security checkpoints.

Only 24 states (plus Washington, D.C.) currently comply with the rules set forward in the act. That does include Georgia. The remaining states have been given extensions (through 2017) to meet REAL ID standards.

The process to change statewide ID standards can be lengthy. Legislation in many of the states has been introduced, but the bills may have trouble passing because of privacy concerns.

Travelers from the nine states can either get passports now, or wait and see if their state’s laws change in time to comply with the TSA.