“Bull Durham” begins performances at the Alliance Theatre on Sept. 3 and runs through Oct. 5.

Composer Susan Werner admits that she has stolen freely from Ron Shelton, who wrote the 1988 movie on which the world premiere musical Bull Durham is based. She also admits she “about fell out of my chair” when asked to join the project. 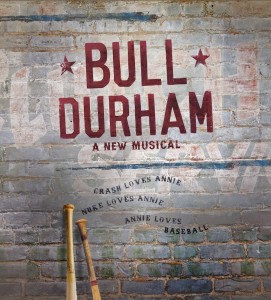 “By stealing from Ron’s dialogue and his monologues, I have benefited so much,” Werner says. “I’ve just been lifting his words because they are so beautiful and so real.”

For example, in Shelton’s film script, Annie Savoy has the line, “Every woman deserves to wear white.” That became the title of a song, Werner says, “but that’s all Ron. The bells go off in your head, and you realize you can build four to five minutes around that great line.”

Shelton drew on his own experiences in the minor leagues to write and direct the iconic 1988 baseball movie featuring Susan Sarandon, Kevin Costner and Tim Robbins as the sultry Annie and ballplayers “Crash” Davis and Ebby Calvin “Nuke” LaLoosh (in the stage version, Broadway pros Melissa Errico, Will Swenson and John Behlmann).

“She just gets it,” Shelton says of  Werner. “She came right off the farm in the Midwest, so she has the dirt under her nails like a ballplayer, and also a sense of the sexiness that was required.”

For the record, Werner was raised in rural Iowa and studied classical voice at Temple University in Philadelphia.

Shelton describes Werner’s score as sexy, earthy, fresh, funny and smart, with melodies that linger in your mind. “If you were to pull the bus into a roadhouse somewhere in the South in the late 1980s, this is the kind of country-fried music you might hear coming from that roadhouse.”

Werner says the score “lives at the intersection of sports and sex.”

Like baseball players, Werner has her superstitions. She played softball in a junior league when young and while working on Bull Durham kept her childhood catcher’s mitt at her feet.

“I so believe in good juju,” she says. “That old glove of mine was less than 5 feet away from me the whole time I was writing these songs.”

The idea of turning Bull Durham into a musical had been tossed around for a decade, says Shelton, who always saw the story “as a very musical movie.” He’s been involved in scores for his previous movies, too, including the sports-themed White Men Can’t Jump (1992) and Tin Cup (1996).

To turn Bull Durham into a musical, Shelton studied musicals he admired, from Larry Gelbart’s A Funny Thing Happened on the Way to the Forum (1962), to Arthur Laurents’ Gypsy (1959), calling Gypsy “as pure a piece of storytelling as you will ever find in the musical theater.”

Werner agrees. Gypsy became “sort of a model for us because it’s a great piece of architecture. It holds up so well as these great characters grow and change and challenge each other. It’s tuneful, immediate, easy to follow — and at the same time so impactful.”

Both author and composer describe the creative process as “pure joy,” for them and the team that includes director Kip Fagan and producers Laura Stanczyk and Jack Viertel. The gang got together a few times in New York, but much of the work was done via email, Skype and by sharing MP3 files of songs in progress.

The musical borrows generously from the movie, but some entirely new scenes have been written. Shelton decided his movie, for example, didn’t need a speech in which Annie, Durham’s “high priestess” of baseball, explains her passion for the game.

For the musical? It became the basis for a song.

“I really like the fact that you can be less literal and linear in storytelling for theater,” Shelton says. “A bedroom can turn into a ballgame can turn into a bus. It didn’t have to be real — it just had to be dramatically real.”

Now Shelton wants audiences to “just forget about the film. We’re not trying to remake the movie. This is an entirely new life for the story and these characters.”