Out of Hand Theater rarely does things the conventional way.

The professional company staged 2003’s Big Love in the courtyard outside the Atlanta Contemporary Art Center with a handful of very brave actors doing the work of a hundred or so. When the weather got cold and misty, audience members got blankets. The actor in the first scene got naked and into a filled bathtub. 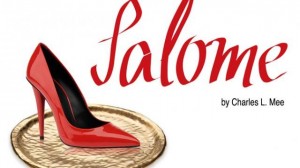 In 2006 came HELP!, a smart, interactive and raucous riff on self-help seminars that traveled through Healing, Elevation, Love and Perfection stages, and ended with everyone drinking the Kool-Aid. MEDS, a madcap critique of the pharmaceutical industry and better-living-through-chemistry, followed in 2007.

More recently, Out of Hand actors have made friends — or enemies — with The Break Up, in which one audience member hops into a car with one performer. They fall in love, fall out of love and break up in less than two minutes. The company has held “Amazing Race”-like scavenger hunts and  experimented with flash mobs.

Now there’s Salome, which is being performed in private homes around Atlanta through Nov. 23 (a few are invitation only; most are open to regular people like you and me). Like Big Love, Salome is by Charles L. Mee, a playwright known for radically reconstructing existing texts.

Lest that be too heady for you, Out of Hand describes it as “sex, pleasure, manipulation, violence and discovering who one is.” The 45-minute, one-woman piece features Out of Hand co-founder Maia Knispel, who calls it “intense.”

Audiences are limited to 30, sometimes less, depending on venue. The $25 ticket includes tea, and a post-performance wine-and-nibbles reception. More details HERE.

“I’ve really wrestled with this piece on and off,” Knispel, 37, says of Salome, which she’s been working on since graduate school in England. (She has an MFA in theater practice and intercultural actor training from the University of Exeter.) “I really came around about it. I think it’s really beautiful.”

She had some interest in revisiting the text but didn’t considered it for Out of Hand until a conversation with company leaders Ariel and Adam Fristoe. “We started talking about what it would be like to perform it in people’s homes, and that took it in an Out of Hand direction.”

They began asking known local arts supporters locally to host performances, Adam Fristoe says. When word got out, others volunteered. 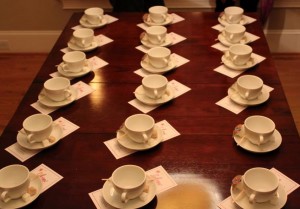 Of tickets, he says, “They won’t last. No walk-ups, so make plans now.” Ticket buyers do know the date and neighborhood of their performance but  don’t learn the exact address until it’s emailed the night before the show.

Knispel and other Out of Handers show up at 6 for an 8 p.m. “curtain.” They rearrange the living room and do a sound check. Knispel gets ready. Someone boils water for the tea.

“It’s one of the most challenging experiences I’ve ever had as a performer,” Knispel says. She’s close enough to touch her viewers and look them in the eye. Neither performer nor spectator gets a break. And although the piece is adult fare, there’s nothing like nudity to encounter.