The North American premiere of a new production of Bela Bartók’s one-act chamber opera Bluebeard’s Castle, will kick off the Atlanta off the Atlanta Opera’s acclaimed Discoveries Series for 2022-23.

Celebrating its tenth season, the Atlanta Opera Discoveries Series is known for presenting new works and ideas as well as fresh perspectives, such as the production of Bluebeard’s Castle.

Traditionally presented as a psychological thriller or Gothic horror as the lover uncovers the secrets of Bluebeard’s past, this production centers the story on the loss of a loved partner to the ravages of dementia in a way that will resonate with anyone who has dealt with aging partners or parents.

Bluebeard’s Castle will be led by its creators, director Daisy Evans and conductor Stephen Higgins, together the creative force behind England’s Theatre of Sound.  Michael Mayes re-unites with Susan Bullock as Bluebeard and Judith, roles they created for the world premiere of this production in London.

Presented in partnership with Kennesaw State University’s School of Music, Bluebeard’s Castle will be staged at the Dr. Bobbie Bailey & Family Performance Center on October 7, 8 and 9. Tickets are $50 ($40 student/military/senior) and can be purchased directly through the Kennesaw State University College of the Arts or by calling The Atlanta Opera box office at (404) 881-8885. The opera will be performed in English.

In the spring, The Atlanta Opera will present its second Discoveries production for the 2022-23 season, The Snowy Day by composer Joel Thompson and librettist Andrea David Pinkney, in partnership with the Morehouse College School of Music.

Photo: Susan Bullock as Judith performs in the London world premiere of Bluebeard’s Castle in 2021. Photo credit: Mihaela Bodlovic for Theatre of Sound. 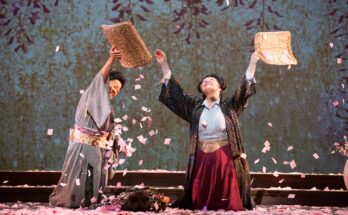