The best of soundtracks from the screen will come to life on stage in Lawrenceville next month.

Aurora Theatre will present Independent Artists Playhouse’s Music in Pictures, a cabaret featuring songs from movie soundtracks for one night only on April 3 at 2:30pm and 8pm. This performance will be live on the Aurora stage (128 East Pike Street Lawrenceville, GA 30046) with tickets sold in pods.

About Music in Pictures

Music in Pictures is a cabaret event highlighting some of the greatest songs from the silver screen. A film’s soundtrack is one of the most important parts of the movie-going experience, sparking emotions from the viewer. Many songs become synonymous with story and elevating our experiences at the movies. Iconic melodies that will be brought to life onstage by some of Atlanta’s best vocalists include “Wind Beneath My Wings” from Beaches, “(I’ve Had) The Time of My Life” from Dirty Dancing, “Eye of the Tiger” from Rocky III and so many more from America’s favorite flicks.

For more information about this performance and Aurora Theatre’s upcoming performances, visit AuroraTheatre.com. 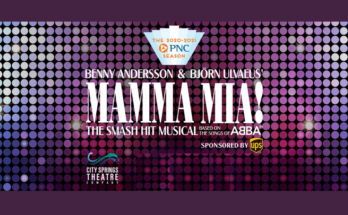 Save the Date: Synchronicity Hosts 18th Annual Women in the Arts and Business Luncheon, 4/30