Over the years, the Broadway community has often seen theatre artists coming together to advocate a common cause. A recurring objective of this advocacy has been to promote the acceptance and visibility of lesbian, gay, bisexual, transgender (LGBT) people through the Pride movement.

While many may know expressions of Pride as marches or parades, the movement is felt in theatre as a celebration of and dedication to relentless individuality. Pride’s place in theatre has always required uncompromising advocacy. These efforts have raised the art of theatre to new heights and lead to increased visibility of LGBT actors, characters, and story lines. These stories celebrate the confidence and self-belief that all theatre artists must embody, that which tells them to keep creating and keep embracing who they are day after day. It’s the inner guiding light that says “My perspective is valuable, and if you don’t think so now, you will one day.”

In honor of Atlanta’s own Pride celebrations, Encore is highlighting five must-know musicals that significantly increased visibility of LGBT stories on Broadway.

The best way to start a Pride on Broadway tribute has to be with the show that first loudly and proudly proclaimed, “I am What I am.” From Hello, Dolly! songwriter Jerry Herman, La Cage not only brought back the traditional Broadway sound, but proved that drag queens could have a presence on the Broadway stage as main characters rather than gimmicks or showpieces.

“[La Cage aux Folles] changed the way the business side of Broadway perceived a ‘gay themed’ musical and how it could generate financial success,” says Jerry Mitchell, Tony Award-winning director/ choreographer of Kinky Boots and the Alliance Theatre’s recent Becoming Nancy. In fact, Mitchell won his first Tony Award for Best Choreography for the 2004 revival of La Cage aux Folles.

As Herman put it in his 1984 Tony Award acceptance speech for Best Original Score, presented by Larry Kert, “There’s been a rumor around for a couple of years that the simple, hummable showtune was no longer welcome on Broadway. Well, it’s alive and well at the Palace!”

Out Front Theatre Company, Atlanta’s only exclusively LGBTQIA+ theatre, is producing La Cage this month, and director Paul Conroy says the piece at its core is simply about love.

“When I say ‘love,’ I mean it in all senses of the word: romantic love, love of family, love of community, and most importantly love of self. La Cage was a seismic shift in musical theatre when it premiered because it openly and honestly looked at a loving same sex relationship and non-traditional family structure.”

Rent is the ultimate ode to New York artists in the 1990s. With a score that rocked Broadway upon debut, Rent championed a cast of diverse characters and gave a voice to the heart-wrenching impact of the AIDS crisis on the Broadway community. During the original production, cast members would slip in a nightly tribute to friends struggling with AIDS by giving their names to the minor characters in the “Life Support” scene, serving as a personal reminder of why they were proud to tell Rent’s important story.

Continuing the Pride path pioneered by La Cage aux Folles, Kinky Boots tells the story of a shoe manufacturer who teams up with Lola, a drag queen, to save his family’s business with a revolutionary line of – what else? – high heels. Jerry Mitchell directed and choreographed this piece to six Tony Award wins including Best Choreography and Best Score for Cyndi Lauper.

In true Pride fashion, Kinky Boots celebrates the power of diversity and the strength that interpersonal differences can bring. Mitchell says his work on Kinky Boots and other Pride-centered shows have taught him that representation really matters, and putting these works on stage matters. “The more we share our stories, the more we get to share our stories,” Mitchell says. “There is a lot of truth in the finale lyric of Kinky Boots, ‘You change the world when you change your mind.’”

One of this year’s Best Musical Tony Award nominees made its world premiere at Atlanta’s own Alliance Theatre in 2016. The Prom is a big, beautiful lovefest with lots of heart and glitter. The musical centers around Emma Nolan, who experiences backlash when she wants to take her girlfriend to prom. With the help of some pushy yet winsome out-of-work Broadway stars, Emma – spoiler alert – sees this dream come true. The Prom speaks to an experience with which many high schoolers can identify: feeling met with contempt when simply wanting to be themselves.

Mitchell says he feels most proud when his work impacts not just people directly affiliated with the theatre industry, but those outside of it. “I am most proud when I receive notes of thanks from individuals outside of the business,” the artist shares. “Real people from real walks of life – straight, gay, fluid – who are responding to messages and the feelings of being counted. Those voices matter and continue to fuel my work.”

To Conroy, Pride is all about people listening and learning together: “Seeing people come together in ways that they haven’t before and being willing to listen and learn from others that do not identify in the same way that they do is the most hopeful thing possible.”

A major coming together of the theatre industry, one that stretches beyond the bounds of the stage, is Broadway Cares/Equity Fights AIDS (BC/EFA), an organization that hosts multiple events and fundraisers through the year to support AIDS-related causes. A favorite of these events each year is BroadwayBares, a burlesque show featuring Broadway’s best, which was started in 1992 by Jerry Mitchell himself. By raising over $300 million in generous donations from the American theatre community, BC/EFA has been able to provide emergency health care and financial assistance to people across the country since 1988.

Whether on stage or in action, the Pride movement is near to the essential spirit of the theatre community: helping others, supporting artists, and telling important stories. Ultimately, Conroy says, the movement is all about people listening and learning together: “The empathy of the human spirit and the desire to be accepted should lead to acceptance of others, and that is what I call true Pride.” 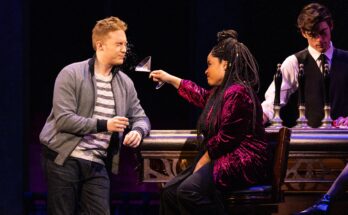 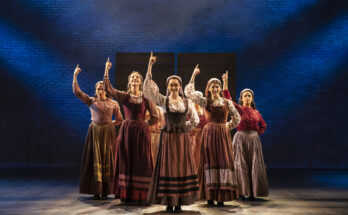 Quick Pics: FIDDLER ON THE ROOF Comes to the Fox Theatre