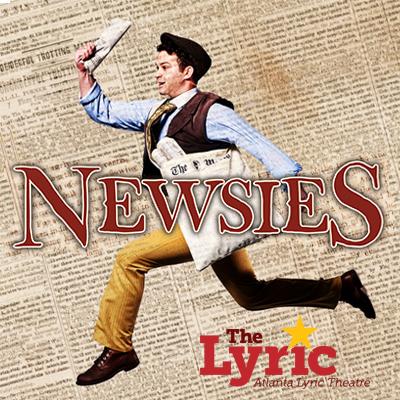 ATLANTA LYRIC THEATRE uses a cast of 31 to tell a story inspired by the real-life Newsboy Strike of 1899. Newsies, with a Tony Award-winning score by Jack Feldman and Alan Menken (Aladdin, Beauty and the Beast, The Little Mermaid), is based on the 1992 Disney movie. The musical takes place in turn-of-the-century New York, where publishing titans Joseph Pulitzer and William Randolph Hearst try to take advantage of the news carriers to increase profits. The newsboys response: Strike!!! Hearst and Pulitzer didn’t bank on facing the charismatic Jack Kelly, who becomes the boys’ leader and champion. The show features 19 songs, a live orchestra and a lots of dancing. This co-production had a summer run at Aurora Theatre in Lawrenceville. The same company of actors returns here. (Top photo by Chris Bartelski)

BUY HERE. ALL TICKETS WILL BE HELD AT WILL CALL.