YOU'RE IN THE BAND — Encore Atlanta
Skip to content
ShareTweetShare

to his Jesus Christ Superstar roots

with a head-banging stage version of School of Rock

ANDREW LLOYD WEBBER, the Tony Award-winning composer of Cats, Evita, The Phantom of the Opera and Sunset Boulevard, wants audiences to have a “really good time” at his most recent show, an unabashed musical comedy.

“School of Rock is fun,” he says. “Hopefully, I’ve fleshed it out with a few catchy songs and kept the spirit of the original movie.” But Lloyd Webber adds, there’s more to the show than that.  “Hopefully you will also take out of it the central message of the story — which is a very warm and simple one about the empowering force of music.”

Lloyd Webber, along with book writer Julian Fellowes, lyricist Glenn Slater (Sister Act, Little Mermaid) and director Laurence Connor, have taken Richard Linklater’s 2003 movie — which helped make Jack Black a box-office name — and given it new life onstage. It tells the story of an outrageous rock star wannabe named Dewey Finn, who worms his way into a substitute teaching job at a private school. Dewey puts together a rock band with his students to compete against adults in a Battle of the Bands contest — and, as a result, changes their lives.

Onstage, the adaptation features a not-so-secret sauce: The kids play their own musical instruments. And do it well.

“There is something very moving about that,” Fellowes says. “I mean you are sort of half moved to tears, simply by the fact that they’re playing this music.”

“You wouldn’t really think that it’s 10- and 11-year-olds,” Lloyd Webber says. “It’s extraordinary for their age, just how great they are and how together they play.”

The young actors’ musical skills are showcased several times in exuberant rock numbers like “You’re in the Band,” “Stick It to the Man” and one song retained from the movie, “Teacher’s Pet.”

The idea for the musical came from Lloyd Webber’s wife, Madeleine, who purchased the rights. “I thought maybe it was something that we would flesh out with existing rock songs, because there were a few in the original movie,” Lloyd Webber says. But on closer inspection, he realized there wasn’t that much music in the film. So, he started looking for places to add songs.

“I saw a couple of moments in the movie where I thought I could,” he says. “And so, my next port of call was to talk to a major dramatist, because when you’re dealing with a successful film like this, which has a whole life of its own, I really wanted to talk to somebody who also has had a major career in film, television. And Julian Fellowes, who I know has also written for the theater, was an obvious choice, because he’s a real craftsman.”

Fellowes, the creator of Downton Abbey and, like Lloyd Webber, a member of Britain’s House of Lords, knew and loved the movie.

“I thought all of it — script, everything, was terrific,” Fellowes says. “Sometimes you have to talk yourself into things, or at least research them to see if you want to do it. But I knew I wanted to do it straight away.”

This wasn’t the first time Fellowes had been called on to adapt a popular movie. He wrote the book for the Disney/Cameron Mackintosh stage musical based on Mary Poppins.

So, over a two-year process, Fellowes and his collaborators worked on bringing more depth to the story without losing the comedy. In particular, they wanted to flesh out the roles of the children and their relationships with their parents. “I think it makes the children’s parts a little more interesting to play,” Fellowes says. “They are all more defined as characters.” 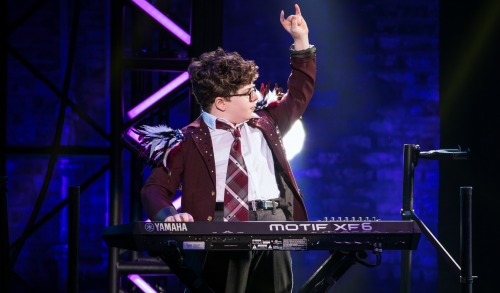 In fact, the first song Lloyd Webber wrote for the show was “If Only You Would Listen,” sung by the kids to their un-listening parents. Says  Connor, the director: “I think we actually came up with that song title the first time we sat around the table, because we just knew that there was there was something in that. And the importance of that message and what Dewey does for them is that he is the only one that they feel listens.”

Lloyd Webber discovered his love of music and theater at about the same age as the kids in the show. So, he says, , School of Rock represents a coming home of sorts.

His first big hit was the rock opera Jesus Christ Superstar, which he wrote at age 22. “When we recorded Superstar, Led Zeppelin were in the next door studio making an album. And the lead singer of Deep Purple was our Jesus on the original album. So, coming back to doing this wasn’t a huge leap for me.”

The producers of “The School of Rock” provided this article.