Actor’s Express will present a three-night concert staging of the Stephen Sondheim musical Merrily We Roll Along in October, giving Atlanta audiences a glance at one of the master’s most problematic, moving and beautiful shows.

The musical, told backward from 1980 to 1955, details the clash of personal and professional ambitions of three old friends — a composer named Franklin Shepard, a lyricist named Charley Kringas and a writer named Mary Flynn. It’s arguably one of Sondheim’s most fascinating shows, with one of his best scores (“Old Friends,” “Good Thing Going,” “Our Time” and “Not a Day Goes By”). 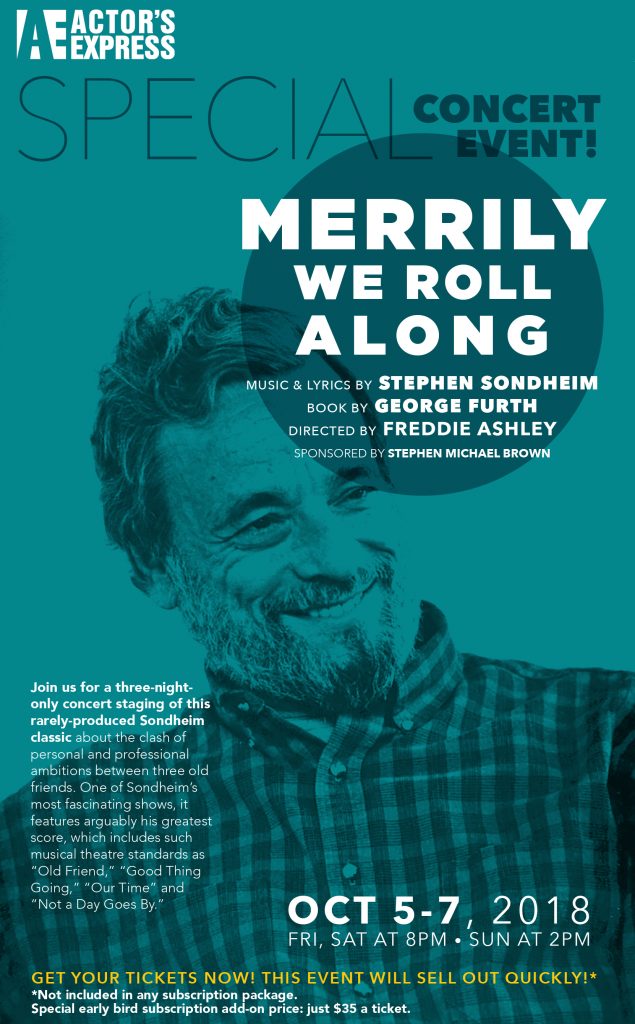 The original Broadway production of Merrily We Roll Along lasted only 44 previews and 16 performances, leading to decades of rewrites and restagings in this country, Britain and Australia. The score was nominated for a 1982 Tony Award and won the Drama Desk Award for its lyrics, but the show was a verifiable flop and effectively ended the long partnership of Sondheim and producer-director Hal Prince (Company, Follies, A Little Night Music, Pacific Overtures, Sweeney Todd), who wouldn’t work together again for 22 years.

Still, Merrily became a sort of cult show for musical theater lovers who refused to let it fade into history. To date, the show has produced five recordings (the original Broadway cast, a remastered original, a 1993 British cast, a 1994 off-Broadway revival and a 2012 Encores! revival staging). A 2012 staging at London’s Menier Chocolate Factory became a live film that was broadcast in movie theaters across the country, including Atlanta.

In 2016, actor-director Lonny Price (the original Charley Kringas) filmed and narrated a documentary titled Best Worst Thing That Ever Could Have Happened about the “thrilling, wrenching experience” of the original production.

So, you see, Merrily has its fans. Including Express artistic director Freddie Ashley, who calls the show the most emotionally complex of the Sondheim canon. This concert may even be the start of a new series. “I like this format,” Ashley said in a statement, “because it allows us to focus on the music itself and the most essential elements of storytelling.”

Ashely will direct. The cast and the rest of creative team have not yet been announced.