WITH ITS DEMANDING SCORE, DONIZETTI’S COMIC DAUGHTER OF THE REGIMENT TURNS SINGERS INTO RISK-TAKERS — WITHOUT A NET.

The Atlanta Opera’s four-performance run of “The Daughter of the Regiment” takes place Feb. 24-March 4 at Cobb Energy Performing Arts Center. Details, tickets HERE or at 404.881.885.

TENORS CALL The Daughter of the Regiment a “High C’s” adventure. To put it in context, think of 19th-century circus paintings by such artists as Degas and Seurat: They show a crowd of people gathered around acrobats performing implausibly dangerous stunts. Donizetti is the opera singer’s equivalent.

His brilliance lies not only in great storytelling and heartrending arias but also in his risk-taking. By writing music that is almost unsingable — except by the most skilled and daring — he dazzled Parisians and fed their appetite for spectacle.

Gaetano Donizetti was born in 1797 to a poor family in Bergamo, Italy. A benevolent teacher and advocate steered him into a boy choir and saw to his schooling. As a young adult, Donizetti began to work his way into the fraught world of Italian opera. Bouncing between success and failure, rejection and adulation, the young composer settled in Naples in 1822, where he wrote as many as five operas per year.

Naples was a mixed blessing. Although Donizetti was incredibly productive, he chafed against a considerable amount of prejudice toward northern Italians. Worse, censors in the kingdom were strict and inconsistent. 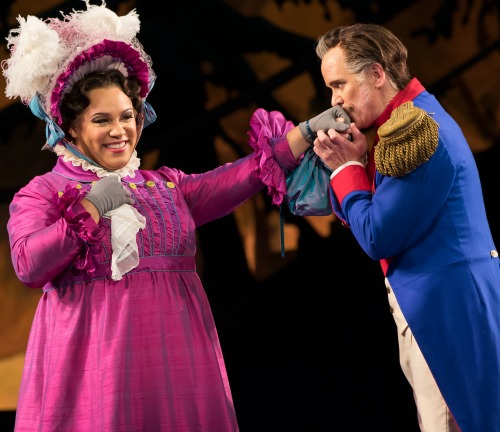 He repeatedly tripped their wires by depicting topics ranging from suicide (a mortal sin) to religious imagery (sacred subjects in theater were considered an act of indecency). Twice, operas approved at the libretto stage were canceled just before opening night. Some that had had successful runs in other cities were not permitted onstage in Naples.

The Royal Opera House’s John Snelson wrote: “One of the censors there was so horrified [by Lucrezia Borgia] that he protested about it to the police, stating that ‘It ends with the death of six individuals, five of whom are poisoned at one table, where they have been enticed by the blackest perfidy disguised as polite and chivalrous hospitality.’ So, not just a dangerous example of treachery among the ruling classes, but an appalling breach of manners.”

Undaunted, Donizetti worked at an energetic pace. In 1830, with more than 30 operas to his credit, the 32-year-old scored his first international hit with Anna Bolena. More hits followed, until he endured one too many humiliations from the king: Ferdinand II decided that the theater was an unfit place to depict a saint’s martyrdom and canceled the 1838 premiere of Poliuto. Donizetti left for Paris.

There, his instinct for theater met an eager audience. In a testament to his rock-star status (and to jealousy), Hector Berlioz complained:

“Two major scores for the Opéra …  two oth­ers at the Renais­sance … two at the Opéra-Comique … and yet another for the Théâtre-Italien will have been writ­ten or tran­scribed in one year by the same com­poser! M. Donizetti seems to treat us like a con­quered coun­try; it is a ver­i­ta­ble inva­sion. One can no longer speak of the opera houses of Paris, but only the opera houses of M. Donizetti.” 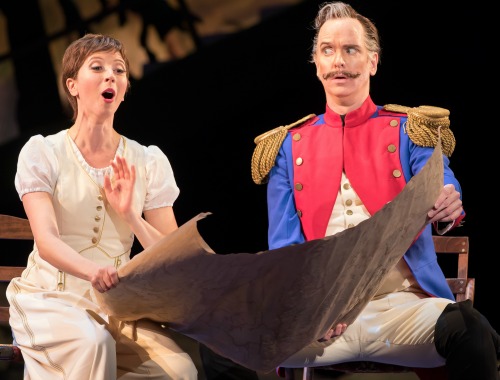 Paris was the pinnacle for 19th-century opera composers. Donizetti’s first order of business was to turn Poliuto into the French-language grand opera Les Martyrs. As final preparations were underway, he tossed off The Daughter of the Regiment.

The romantic comedy, written in about 40 days, premiered in February 1840 at the Opéra-Comique, whose name is slightly misleading. It comes from a type of show called opéra comiques en vaudevilles, which, at first, combined popular songs with spoken sections. Although many of the shows were comedies, they weren’t exclusively so. Bizet’s Carmen — a tragedy — came from this tradition. That Daughter of the Regiment is opéra comique suggested it had spoken dialogue, not that it is a comedy (although it is). The Atlanta Opera sings the opera in French with English supertitles.

Based on a libretto by Jules-Henri Vernoy de Saint-Georges and Jean-François-Alfred Bayard, the story hatches amid a lovable pack of grenadiers from Napoleon’s army. Peppered with popular French military tunes and nods to army life (minus the brutality), the comedy isn’t so much a series of gags as it is an outlandish situation: What happens when soldiers raise a little girl?

Acutely aware of his public, Donizetti combined the vocal high-wire act, the stirring arias, and those huggable grenadiers for a lob straight at the hearts of Parisians. It worked. Donizetti’s first French opera became an annual Bastille Day tradition. Its special challenges gained a reputation of a different kind among opera insiders: Luciano Pavarotti made his big break singing the role of Tonio, notably because of his aria “Ah! Mes amis,” which floats nine high C’s. (And why not? Tonio has just been told he gets to marry the girl of his dreams.)

The fiendishly difficult soprano part combines buffoonery, pathos, athleticism and its own array of vocal acrobatics. Like the French paintings of circus performers, The Daughter of the Regiment sets up a juxtaposition of two separate experiences: the people who watch, and the people who risk everything. 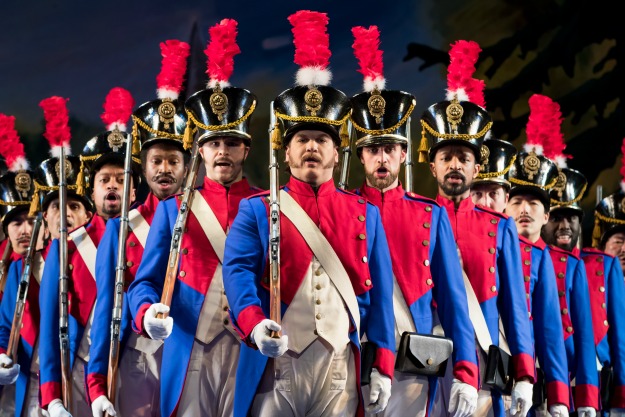