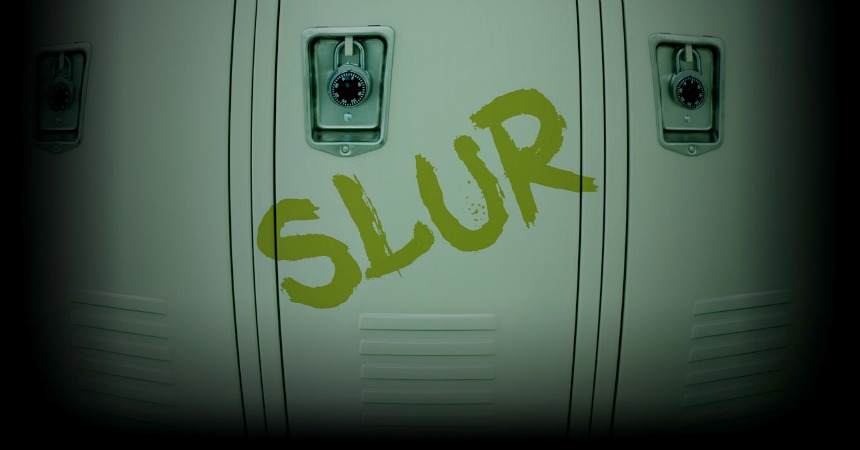 THE ALLIANCE’S FAMILY SERIES CONTINUES WITH ‘SLUR,’ A LOOK AT IDENTITY THROUGH MIDDLE-SCHOOL EYES AND AN IMPORTANT PLAY FOR THE WORLD WE’RE IN NOW

“DO WE HAVE to be what society says we are?”

“Can we discover who we are, and ask society to accept that?”

With those questions and some guidance from teachers, seventh- and eighth-graders at the Paideia School last year began to shape and stage an original play.

Slur, as it was titled, is about identity, race and religion in middle school. After development at Paideia and through the Alliance Theatre’s summer camps, the world premiere of Slur continues the theater’s 2016/17 Youth and Family Series.

Let’s rewind a moment. When the process and performances ended at Paideia last March, and the applause faded, the work proved too powerful to disappear. Its life continues now with professional actors on a professional stage.

Paideia teachers Greg Changnon and Martha Caldwell have had students read and study a classic text as an annual project for several years. Using class discussions and student writings, Changnon then crafts the first draft of a script.

“What’s so great about middle-school kids is that if you give them a safe place and ask them to tell their story,” he says, “they will be brutally honest and utterly revealing.”

In 2015, the classes read William Golding’s Lord of the Flies and created a piece called Only Us, about unsupervised students stuck in a school building during a “snowpocalypse.” Slur began with George Bernard Shaw’s Pygmalion, about an Englishman’s efforts to turn and unrefined Cockney flower seller into a duchess.

“The kids wanted to do a story about identity,” Changnon says. “They wanted to explore the fact that who they are is sometimes dictated by their parents, by other kids and by stereotypes.” As he put together a first draft and roles were assigned, students were asked, as actors often are, to create backstories for their characters and help flesh out the play.

It was a powerful way for them to see their stories validated, Changnon says.

In the Paideia performances, 29 students had roles and three worked backstage. At the Alliance, five actors in their early 20s play a dozen or so middle-schoolers.

The plot centers on a girl named Daisy. As Slur begins, the middle-school characters learn that the word “jihadist” has been smeared on her locker. The paint isn’t even dry.

They debate what to do. Should they clean the locker to protect Daisy? Would that be protecting the culprit instead? Should they leave it for all to see? One student is nervous just to know it’s there: “I can’t have that on my record.”

The Slur process was “all sort of a blend of method acting and autobiography-memoir,” Changnon says. It also involved Atlanta theater artist Suehyla El-Attar, who provided her own input.

El-Attar is the dramaturg (literary consultant) on the Alliance staging, examining the play’s structure and helping Changnon “find the truth of the characters.” El-Attar — who acts, directs and is a playwright herself — has worked with middle-schoolers for years and says that she’s “constantly blown away by the courage they have to be honest and give voice to themselves.”

She comes from a Muslim-Arab family but grew up in the Southern Baptist town of Starkville, Miss. While she connects with questions raised in Slur, she wants to make clear that it’s not her story. It springs specifically from the minds of 32 Atlanta students, she says, who have created “an important play for the world we’re in now.”

“Identity” is a meaty word, El-Attar says. “It doesn’t just encompass race or religion or class or what neighborhood you live in. It encompasses someone deciding who they are as a person, beyond those boundaries.”

She believes that because of its history, Atlanta has more conversations and awareness about the subject than most places.

“That doesn’t mean we’re better,” she says. “I think it’s our identity crisis just in terms of being in the South. That creates an increased awareness.”