THE LEADING LADY IN ALLIANCE THEATRE’S ‘THE PROM’ CAN ‘TAKE A SHOW TO SURPRISING PLACES,’ SAYS HER DIRECTOR (AND FRIEND).

SHE’S PLAYED DOLLY LEVI, M’Lynn in Steel Magnolias and, most famously, the Drowsy Chaperone in the 2006 Broadway musical The Drowsy Chaperone, winning a Tony Award and warbling such lyrics-to-live-by as “Keep your eyeball on the highball in your hand.” 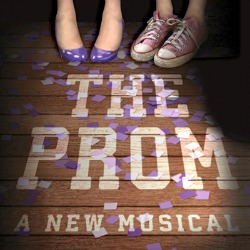 Now Beth Leavel is temporarily encamped in Atlanta to take part in the Alliance Theatre’s world premiere musical The Prom. The premise: An aging group of out-of-work actors fixates on a cause, invading a small Indiana town on behalf of a lesbian whose high school cancels its prom because she planned to bring her girlfriend.

Sounds serious, no? Well it is, and it isn’t. Neither is Leavel. Or such partners in crime as director/choreographer Casey Nicholaw and book writer Bob Martin (cohorts from her Drowsy days).

“My favorite thing to do,” Nicholaw says, “is to do a show where people are loving the music, loving the dancing, laughing their butts off and suddenly they’re like, ‘How did I get this tear in my eye?’”

Enter Leavel, who plays Dee Dee Allen, a character she calls her “alter ego and evil twin.” Dee Dee, she says, is “an amazingly successful Broadway mega-star whose career is suffering just a bit. She’s had three flops in a row and needs a cause celebre. She’s narcissistic. … It’s so much fun to play.”

The North Carolina-born, New York-based Leavel discovered theater in the  fifth grade, playing “some western something in the elementary school play.” She remembers getting a laugh and says, “It imprinted on me.”

When, as a high school senior, she was cast in the musical Brigadoon, she recalls wanting “to know how I could always stay in that oxygen.”

Quite an epiphany for a girl who auditioned because her best friend said it was a great way to meet boys.

Still, Leavel wavered on a career choice. She studied social work at tiny Meredith College in her hometown of Raleigh, doing every theater-related thing she could get her hands on there. Then she went to grad school, getting an M.F.A. at the University of North Carolina at Greensboro.

New York terrified her (her word), but she took the leap. Her first apartment, in Midtown Manhattan’s Hell’s Kitchen, was so hellish she wouldn’t let her parents inside.

But, she says, she was lucky. She did a single catering gig, was a tour guide “for a hot minute” and waitressed for two weeks (“It was fancy. I didn’t do it very well”) before getting her first professional job, in summer stock, as the standby for Lucie Arnaz in a tour of the musical I Do! I Do! Then came the first national tour of 42nd Street and, in the 1980s, her Broadway debut in 42nd Street, as Anytime Annie. There would be no more nettlesome day jobs.

Leavel has done 11 Broadway shows so far, worked in regional theaters from Oklahoma to Massachusetts and not long ago made her cabaret debut to sellout crowds at Manhattan’s 54 Below. You might remember her as Ma Tuck in the Alliance’s Tuck Everlasting in early 2015.

“The second that Beth walks onstage, you gravitate toward her,” Nicholaw says of the actor he calls “Dame Leavel.” “She has enormous range, as a singer and as a comedienne. She inspires directors and writers so much, now they talk about ‘the Beth Leavel part.’ She can take a show to surprising places.”

The Tony Award in 2006 changed her life and career. “It’s really hard to put into words how accepted I felt after that,” she says, reflecting still on comments from colleagues who said her win represented a win for all working actors who’d been delivering for years with little notoriety.

“It’s a very, very, very special club, which feels really good,” Leavel says. Whenever she’s introduced as a Tony Award winner, she thinks “’Oh, my gosh, that’s me,’ and I enjoy it every time.”

And, happily, work continues to come her way. Sometimes through an audition, sometimes not. “People assume that after the Tony Award I’d never have to audition again,” she says. “Oh, nay-nay. If I don’t know the director it behooves us to be in the room together. That way, I feel that I have earned it.”

With The Prom team, especially Nicholaw, Martin and Chad Beguelin (lyrics, book), she has a sort of shorthand. “This community of my pals makes me want to raise my bar even higher because I don’t want to let them down.”

That was true on the first day of Prom rehearsals, when the company trouped through three opening numbers to find the best one, and on a hot Tuesday in July, when Leavel spent the morning doing hip-hop.

The show, she says, “leads with a wonderful heart.” Dee Dee has a fantastic song, an Evita moment, in Act 1, she adds, and an “amazing” ballad in Act 2.

Although Leavel’s list of dream roles includes Mama Rose in Gypsy (to improve upon her grad school interpretation) and Mrs. Lovett in Sweeney Todd, she puts Dee Dee Allen in their company.

Mostly, she says, “I want the next Drowsy Chaperone, where you get to do something original and put your DNA all over the role.

WHAT DOES A TONY WINNER DO WITH HER TONY? 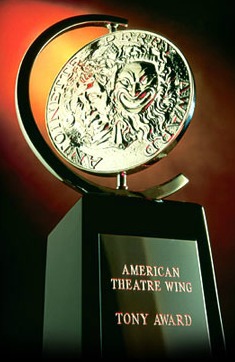 Historically, Tony awards have had places of honor in their winners’ homes, been used as bathroom adornments or doorstops, or sometimes tucked away somewhere, perhaps in a box or out of sight.

Beth Leavel keeps her Tony, the famous silver medallion she earned for the musical The Drowsy Chaperone in 2006, on a shelf in her Manhattan apartment. But it does take field trips. She took it backstage with her at Mamma Mia!, her most recent turn on Broadway.