Metro Atlanta’s Aurora Theatre will do five shows in its 2016/17 Harvel Lab Series, three contemporary plays, including a world premiere, and the return of the holiday favorites 12 Dates of Christmas and Charles Dickens’ A Christmas Carol.

The more intimate shows in the Harvel Lab augment what happens in the bigger confines of Aurora’s mainstage. This year’s six-show mainstage season begins July 21 with the Tony Award-winning hip-hop musical In the Heights by Lin-Manuel Miranda (Hamilton). It closes May 28 with the comic drama Split in Three — by Atlanta playwright Daryl Lisa Fazio — about sisters caught in the midst of school desegregation in rural Mississippi.

[MORE ABOUT THE MAINSTAGE SEASON HERE]

The Harvel series, Rodriguez says, began as a way to appeal to college students and young adults, since part of Aurora’s mission is to create a new generation of theatergoers. The programming draws from issues and stories that resonate with that audience and gives Aurora the freedom to experiment and create productions for adventurous theatergoers, he says.

These shows generally run 90 minutes or less, with no intermission. General admission tickets are $20-$30. Here’s the 2016/17 Harvel Lab Series, in chronological order. 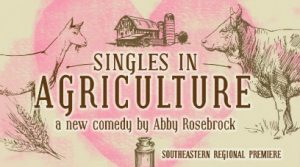 SEPT. 16-OCT. 9. A 2015 comedy by Abby Rosebrock, a South Carolina-born, New York-based playwright/actor. It takes place in a Texas hotel room on the last night of an annual dating convention for single farmers. That’s where a South Carolina Army widow who loves TV’s Modern Family and talks to her pygmy goats pursues romance with a fundamentalist dairy farmer from Oklahoma. The New York Theatre Review called Singles in Agriculture “a triumph,” saying that “Rosebrock and her collaborators achieve a sexy, startling and ultimately uplifting piece of theater.” There is, in fact, a real dating service called Singles in Agriculture. Justin Anderson, Aurora’s associate artistic director, directs.

NOV. 25-DEC. 23. Rodriguez returns to 19th-century England for a 10th season of his one-man show. Yes, he acts, too. By using various voices and mannerisms, he inhabits the characters of Ebenezer Scrooge, Bob Cratchit, Jacob Marley and the storytelling spirits found in this Christmas classic. It runs in repertory with the 12 Dates of Christmas.

NOV. 25-DEC. 23. This one-woman comedy returns for a fourth season with Renita James as Mary, a single woman who’s lost her jingle. After Mary sees her fiancé kiss another woman on national TV, she is set up, hooked up, strung up and fed up as she attempts to meet Mr. Right in the new year. The 2013 comedy is by New York-based playwright/actor Ginna Hoben. It runs in repertory with Charles Dickens’ A Christmas Carol.

FEB. 10-MARCH 5, 2017. A world premiere by Mexico-born, Manhattan-based playwright Georgina Escobar, described as a “strange imagining” and having Dragon Con sensibilities. In the “multiverse” of this adventure, two hit women armed with deadly broomsticks try to sweep the world’s mistakes into oblivion one human flaw at a time. When they fail to clean up Adam and Eve’s apple situation, the superhero sweepers find themselves unleashed on a cosmic journey through time.

APRIL 7-30, 2017. A 1999 play by Pulitzer Prize winner Nilo Cruz (last season’s Sotto Voce) and performed in Spanish with English supertitles. It’s the tale of three Cuban refugees who lust for freedom and liberty but find themselves paralyzed by their country’s oppression. In response, they embark on a harrowing journey across the Caribbean Sea to Miami. Expect magical realism, Latin music and dance. The play is “a stirring and harrowing paean to the power of dreams, the courage of dreamers and their cost,” according to the website floridatheateronstage.com.