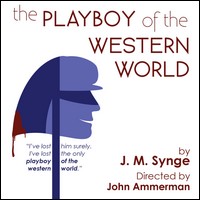 Arís (UH-reesh) Theatre, Atlanta’s stage for Celtic culture, presents a true classic, J.M. Synge’s The Playboy of the Western World. This masterwork tells the story of Christy Mahon, who thinks he killed his da, and with whom every girl in the county is enthusiastically obsessed. Synge’s comedy caused riots at its 1907 debut, revived an Anglo-Irish word and quite possibly launched the title of a magazine, one reads, ahem, only for its articles. John Ammerman directs.