Tuck Everlasting, the Alliance Theatre-born musical based on Natalie Babbitt’s best-selling 1975 young adult novel, will open in April at Broadway’s Broadhurst Theatre, according to Playbill.com.

Tuck tells the story of young Winnie Foster, who discovers the magical secret of the Tuck family and embarks on an extraordinary adventure that will change her life forever. The musical, which debuted at the Alliance Theatre in January and February (featuring Sarah Charles Lewis as Winnie Foster and Newsies‘ Andrew Keenan-Bolger as Jesse Tuck), will begin previews March 23, 2016, and open April 17.

Casting for the Broadway production has not been announced, but major players from the Alliance run are expected to return. Many have been part of the show’s development for several years. The Alliance cast featured three-time Tony Award nominees Carolee Carmello (Parade, Scandalous) as Ma Tuck and Terrence Mann (Pippin, Beauty and the Beast, Les Miserables) as the Man in the Yellow Suit. Lewis and Shannon Eubanks, who played Winnie’s Nana, are Atlanta-based actors.

Tuck features a score by Nathan Tysen and Chris Miller, with a book by Claudia Shear. It’s directed and choreographed by nine-time Tony nominee Casey Nicholaw, who won best direction for The Book of Mormon in  2011 and is currently represented on Broadway by Something Rotten! and Aladdin.

The Alliance has originated several Broadway musicals in the past 15 years, including Aida, The Color Purple, Come Fly Away, Sister Act and Bring It On: The Musical. The Color Purple will be revived in a reimagined Broadway production beginning in December. 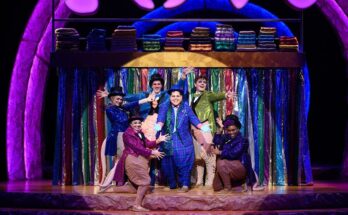