Guardians of Our Past — Encore Atlanta
Skip to content
ShareTweetShare 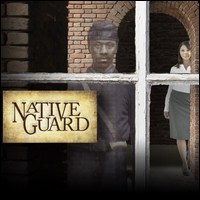 IF EVER WORDS jumped off the page, they do with the world-premiere staging of Native Guard, based on the Pulitzer Prize-winning book of poetry by Atlanta-based Natasha Trethewey.

With the first show of the season in the intimate Hertz Stage, audiences won’t witness “selections from” or a “staged adaptation of” Trethewey’s 2006 text. It’s more of a theatricalization of her original text: word for word, page by page. “We’re not bending poetry to fit theater,” says Artistic Director Susan V. Booth. “We’re bending theater to fit poetry.”

That approach entices Trethewey, who also directs the creative writing program at Emory University and recently served two years as U.S. poet laureate, the nation’s official poet. She especially admires that, as conceived by Booth, who directs, the audience “doesn’t get to skip over anything,” including the book’s dedication and epigraphs.

TRETHEWEY INCLUDED a dozen or so epigraphs in Native Guard, placing brief excerpts from other poets and notables – from Walt Whitman to Nina Simone – in precise locations.

“Readers are notorious for reading right over certain things,” she says. When they come upon epigraphs “they may just turn the page; they don’t always feel like that’s part of what they are reading. But when there’s a vocalist singing that epigraph as a very plaintive spiritual, it brings something that just the words on the page can’t do.”

Early in the show’s creative process, Trethewey got a taste of how vocalist Nicole Banks Long would render certain pieces of her text.

“It moved me to tears,” she recalls. “The reason that I used that particular epigraph is exactly what she is able to manifest. The emotion that I feel when I hear her sing it – that’s the feeling that made me want to use that epigraph to begin with.”

Collectively, Trethewey regards Native Guard’s poems as “elegiac in mood and tone. They are about history of the Deep South, my native Mississippi, the sense of loss and grief. The poems attempt to elegize the things I am grieving about, the things that I lost.”

TRETHEWEY, WHO WAS BORN AND RAISED in Gulfport, Miss., is her home state’s poet laureate. She’s now working on a memoir about her mother, who died just shy of age 41, when Natasha was 19. Poems based on her mother’s life, many “completely imagined,” are key to Native Guard. Others tell the story of young men in the Louisiana Native Guard who’d been freed as slaves and rounded up in 1862 to serve as the first Union regiment of black soldiers. They were treated horrifically (even fired upon) by fellow soldiers.

The idea of combining these two specific portraits of the Southern human experience – one personal, one historical – isn’t exactly obvious. “I did not at first know that they would go together,” Trethewey says.

Yet if you give her a gentle nudge, she might share the back story. One day, some 20 years after her mother’s death, Trethewey was jogging through Decatur Cemetery near her home. She “felt a pull to slow down.”

“It seemed to me that the names on the graves of the Confederate soldiers were demanding to be read,” she says, to be spoken aloud, to be remembered.

She found herself wandering the soldiers’ grave sites. The final couplet of “Graveyard Blues,” the 14-line sonnet that appears early in Native Guard, describes “the very moment I realized these two topics belonged together.”

I wander now among names of the dead:

My mother’s name, stone pillow for my head.

TRETHEWEY IS KEENLY INTERESTED in memory, racial identity (her father was white, her mother black), and keeping the past alive. “Who owns history, and what is our responsibility to know our buried histories?” she wonders. She strives to act as guardian of her mother’s history, but asks, “Who is the keeper of the history of those little-known soldiers?”

The poems in Native Guard are “rooted in the shadow side of American history,” said a reviewer from the American Library Association, which praised Trethewey’s “bayonet-sharp lyrics.”

There’s “music and great beauty” in the way these poems “rub up against one another,” says Booth.

“When you read a lot,” says Trethewey, “you are collecting many words without realizing it. Sometimes, when I am writing, a word will arrive completely unbidden, but happily so. It could be a word I have never spoken or used in my life. But then it comes in my mind, and it will even turn out to be the perfect word. I go look it up in the OED and I do a little dance for joy.”

For Trethewey, poetry “is one of the best ways we have of connecting not only to the intellect but also to the heart. It reminds us across time and space not that we are different, but how we are alike.”