“The Little Mermaid” runs July 8-13 at the Fox Theatre.

BROADWAY REGULAR Liz McCartney is often cast in juicy supporting roles, and she slurps them up with gusto. 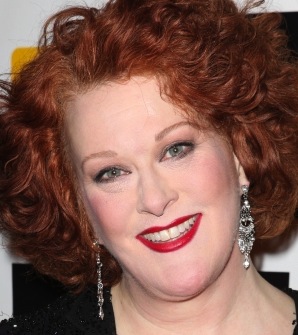 She’s played two seriously frustrated broads: the jealous diva Carlotta in The Phantom of the Opera and the frumpy schemer Madame Thénardier in Les Misérables. She was the salty Bloody Mary in South Pacific at Lincoln Center and the horrible Madame Morrible in the national tour of Wicked. She got great buzz a decade ago when she sang the heart-stabbing “Talk Amongst Yourselves” in Taboo, Boy George’s short-lived autobiographical musical.

So it’s no surprise that McCartney’s name came up when casting directors were seeking someone to play the flamboyant sea witch Ursula in The Little Mermaid. Director Glenn Casale needed someone with a big voice who could play evil deliciously and put pizazz into her character’s glittery tentacles. (McCartney’s arms serve as two of her tentacles; she controls two others on her costume.)

“It’s soooo much fun,” McCartney says, straight from a run to a Home Goods store near her New Jersey home. She’d been shopping for décor for her daughters’ new bathroom.

“My girls — Megan, 10, and Keira, 7 — just love that I’m playing Ursula, but they also say ‘Mom, why do you always play the bad guy?’ I explain to them that I’m really not always that bad. I’m often someone with problems, someone whose life didn’t turn out the way she had planned.”

McCartney pauses a beat or two. “OK. Ursula does kill a lot, so that’s bad.” Then she chuckles heartily.

CLEARLY, SHE’S HAVING A BLAST in this reworked version of the 2008 Broadway show based on Disney’s 1989 animated film, which itself was based loosely on the Hans Christian Andersen tale about a mermaid who yearns for a life on land.

McCartney seems to enjoy being at sea. This is her third summer out of town, and she’s able to bring her daughters along. “They’re always a huge inspiration to me, and I need them with me to be a happy girl.”

She credits director Casale for both the good time this show brings her and the positive reaction that audiences have been showering on this version of Mermaid so far.

“His directing style is fast and energetic and always encourages individual growth,” McCartney says. And he “has the loudest, most unique laugh I have ever heard, and he is not shy about it. The problem is, when he’s not there, and you’ve relied on hearing it, you have to work harder. Isn’t he tricky? Even when he’s gone he’s still directing us.”

When Mermaid opened on Broadway six years ago, it was not a hit along the lines of The Lion King, which is still roaring today. Producers hope this retooled version will prove strong enough to make a bigger splash in New York.

Some of its songs are new; others were tanked. In the original Broadway show, most sea creatures suggested water movement via roller skates. Now, several, including Ariel, glide and swirl on wires to “swim” in much the same way Peter Pan characters fly onstage. 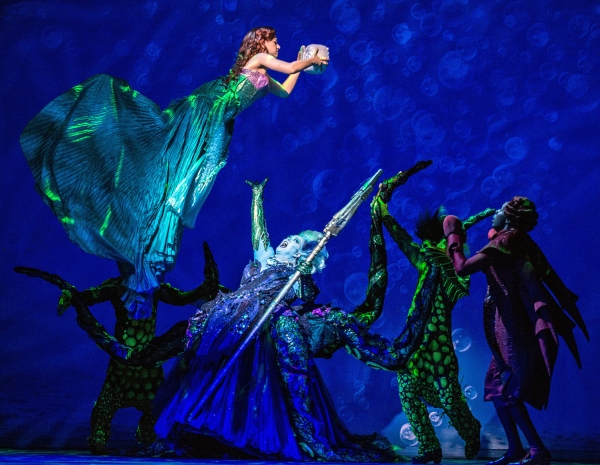 No strings for Ursula, however. “I don’t move a whole lot because I am Ursula, who rules like a queen. I just come in with my sidekick eels and do my thing.” (Her eels, Flotsam and Jetsam, are still on wheels.)

McCartney was part of the original Broadway workshop for Mermaid, so she’s in tune with how the show has evolved.

“There’s more heart and soul now,” she says, adding that her husband saw this show with their daughters “and I happen to know he got a lump in his throat.” This Mermaid  “just makes more sense,” she says. Audiences, for example, learn why Ursula is the way she is.

LIKE THE HALF-HUMAN, half-squid she plays, McCartney is the youngest in her family, “sort of always feeling like I had to prove myself, like I had to do better than my older sisters.” A native of Chelmsford, Mass., she studied musical theater at Boston Conservatory of Music. That led a role in a 1987 musical, the fairly forgotten Sheboppin’, about four girls who work in a 1960s beauty parlor.

She has been bopping (and belting) in bigger waters ever since. But it was Sheboppin’ that gave McCartney her professional credentials. She still howls at the memory of her mother’s reaction when she excitedly announced she’d earned her Actors’ Equity card:

“Oh, Elizabeth, not another charge card!”