“Willy Wonka the Musical” opens Friday at Fabrefaction Theatre Conservatory and runs through May 11. Details, tickets HERE or at 404.876.9468.  (Photo illustration by BreeAnne Clowdus)

WHEN IT COMES to unconventional musical theater roles, Craig Waldrip is one of the more in-demand actors in Atlanta. But even he was wary as he prepared for the wacky title role in Fabrefaction Theatre Conservatory’s Willy Wonka the Musical.

And when he learned the show would feature 39 kids? “Oh boy, that’s a lot of young people,” he remembers thinking.

His concern didn’t last long. “There have been no problems,” he says, days before Wonka begins its 15-performance run. “All these kids are always so well-behaved, so attentive and so ready to work.”

The 39 Wonka kids, ages 6 through high school, are students in Fabrefaction’s 12-week spring program. It culminates with the full-scale musical based on Roald Dahl’s popular Charlie and the Chocolate Factory novel, with songs from the 1971 Wonka film featuring Gene Wilder.

It’s all part of Fabrefaction’s mission, which, says artistic director Christina Hoff, is to train the next generation of theater artists and teach them teamwork and responsibility as well as how to approach their stage work as professionals. To that end, the theater recently — but not lightly — exchanged “company” for “conservatory” in its name.

Throughout the year, young learners at Fabrefaction Theatre Conservatory study various aspects of theater production. Some sessions culminate in a show, often a musical. Some are kids-only, while the more intensive sessions, like Wonka, bring on experienced adult actors who also serve as mentors.

“I WANTED TO CREATE opportunities for young people that I just didn’t have growing up here,” says Hoff, who, at age 17, staged shows for middle-schoolers at Atlanta’s Holy Spirit Catholic Church before going on to study theater at New York University.

Not long ago Fabrefaction leaders realized they had separate patron bases: one for their professional shows, another for their education efforts. “These two groups were not crossing over,” says Hoff, now 26. “So we had to go into the think tank. We did months and months of market research, and it became clear that the conservatory aspect was what could set us apart, was where we could make the biggest impact.”

Hoff, who works with a minuscule staff and lots of contract artists, is backed by an executive director who has a marketing background and knows the artistic director inside out. It’s her mom, Evelyn. “My mom,” Huff says, “is just … Wonder Woman.” 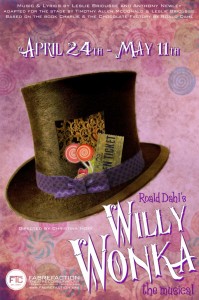 To enroll in the 12-week program, a youngster must audition. Just as parents pay fees for sports programs, music lessons or tutors, there is a fee: $800 for elementary school students and $1,000 for middle and high school students. It covers three months of singing, dancing and acting classes; the mentorship program; a student cabaret showcase; and professional headshots.

About 50 percent of Willy Wonka‘s $70,000 budget comes from those tuition fees, says Hoff, who directs the show. The rest comes from donations and ticket sales. It’s a formula she and her board of directors hope proves sustainable.

GIVEN THE HOURS INVOLVED, says Sandy Hoggard of East Cobb, the tuition is more than fair, and competitive with most extracurricular programs and camps. Her daughter, Reese, 9, is in her third year of classes there.

“At Fabrefaction, your child is not just a number,” says Hoggard. “She has a name. This individualized attention is something that keeps us coming back.”

Reese, who plays Oompa Loompa No. 1 in Wonka, began at Fabrefaction with acting and singing classes. “She has gone from being a not-strong singer to a strong singer — just a huge improvement,” Hoggard says. Most important, she “absolutely loves every moment of the training and experience. She doesn’t want to go anywhere else, and we don’t see the point in her going somewhere else because she’s getting everything she needs and more right here.”

Waldrip, who won the 2013 Suzi Bass Award for lead actor in a musical (Actor’s Express’ Kiss of the Spider Woman) is seeing the conservatory effect firsthand.

“It’s a pretty cool thing that these kids are not just doing Willy Wonka,” he says. “They are being trained to jump into almost any professional situation and know how to handle themselves. These kids are really stepping up.”