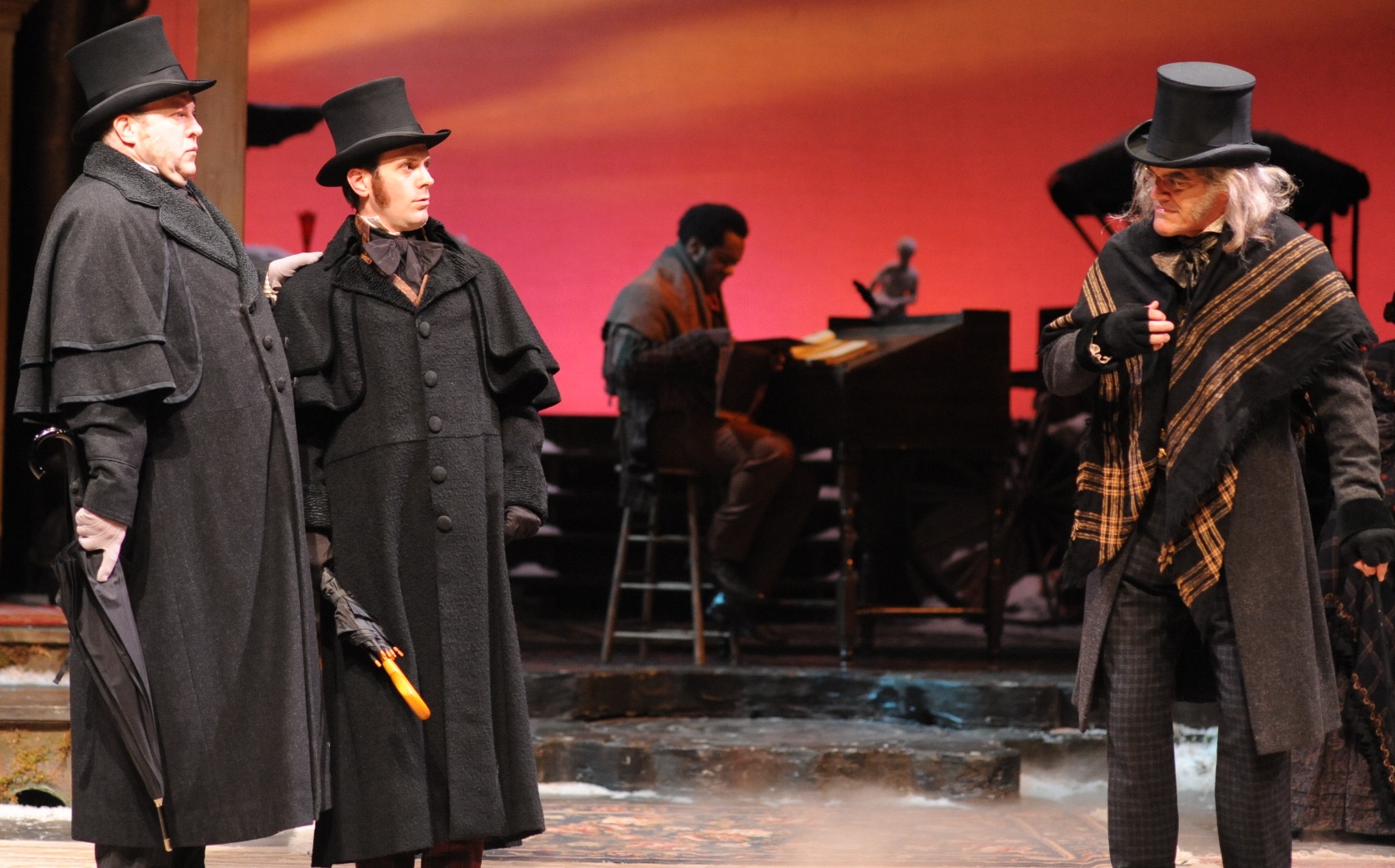 You know all about the “bah, humbugs” and “God bless us, everyones.” The carols, the visitations and Scrooge’s change of heart. You might not know that A Christmas Carol has its own backstage subculture, with secret handshakes, Secret Santas, goofiness and goodwill for all.

This cast of 23 (16 are returnees) will have done some 40 performances by time the run ends, all with only two weeks’ rehearsal. Crazy time? Indeed.

To see how this craziness plays out, we polled actors Chris Kayser (Scrooge, 20 seasons), Bart Hansard (Christmas Present and Fezziwig, nine seasons) and Je Nie Fleming (Mrs. Dilber, Mrs. Fezziwig, seven seasons) for the inside story. Here are snippets of their favorite moments and memories, a certain Mr. Cheer, wardrobe malfunctions and mucus. Yes, a cold or flu bug seems as much a part of their yuletide as ol’ St. Nick.

“We’re the Southeastern cell for Purell sales. We have a whole series of home remedies — teas, Emergen-C, just about any kind of over-the-counter non-drowsy pharmaceutical is in evidence. Failing any kind of fluid erupting from your body, you’re onstage.” (Hansard)

“I am a pretty ridiculous Secret Santa” (Hansard). He’s especially proud of the year he drew the name of Elizabeth Wells Berkes, a Christmas and Star Wars super fan. He decorated her dressing room with a 6-foot-tall white Christmas tree flocked with tiny Darth Vader heads.

“We all love Bart Hansard’s backstage character called ‘Mr. Cheer.’ Two or three times during the run, Mr. Cheer will appear wearing a top hat, a bow tie, no shirt, tights and black show shoes. Everybody goes crazy as he sails through the men’s and women’s chorus dressing rooms” speaking in verse with a proper British accent. (Kayser)

Then there’s Mrs. Cheer, a recent arrival and “rare bird,” who seems to favor one Chris Kayser. (Hansard)

“Elizabeth Berkes came out as Belle one time to play her big breakup scene with Young Scrooge with a wire hanger hooked to the back of her costume. It flopped around the whole scene. Megan McFarland, as Ghost of Christmas Present, and I had to watch without cracking a smile. That was some of the best acting I’ve ever done.” (Kayser)

One year’s program contained this note: “Mr. Hansard would prefer you to throw candy in lieu of flowers.” Audiences obliged, with candy bars at the curtain call.

“It’s always interesting to stand backstage and watch the flying because you can never tell how it’s going to go. Marley one year got stuck. We didn’t stop the show. I think they got him down near the end.” (Fleming)

“We’re committed to telling the story. It’s kind of a combat unit. It’s said that soldiers fight for each other, not for the cause. We are kind of like that, too.” (Hansard)

Kayser’s favorite moment: “The transition between the Transformation and the Reformed Scrooge — when I’m lying down center stage, before I wake up. Me, the actor, is resting before the sprint to the finish, and yet I’m surrounded by a gorgeous, gorgeous chorus of voices (my friends) singing ‘The Holly and the Ivy’ and ‘I Heard the Bells on Christmas Day.’ Beautiful.”

And Fleming’s: “In the poorhouse after the Fezziwigs have lost their wealth. He tells her, ‘Just be grateful for what you have.’ Then the poor people share their food. It somehow sums up for me what Christmas is really about.”