Can Bell out-fiddle Shaham? Are Basquiat’s canvases superior to Warhol’s? Is Fitzgerald a better writer than Hemingway?

These are the questions that playfully try critics’ souls. Music soloists, arguably, are the toughest to judge since they largely apply their skills to existing literature, interpreting rather than creating — in the narrowest sense of the word — greatness. And with the best of the repertoire performed so often to varying effect, in concert and on disc, saying who’s No. 1 comes down to appreciating variables: aesthetics, technique, tone, translational heft and, in the words of the Austrian pianist Artur Schnabel, “… the pauses between the notes … that’s where the beauty lies.” 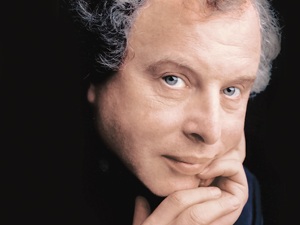 Which bring us to the magnificent Hungarian-born András Schiff’s new ECM tour-de-force recording of Bach’s Well-Tempered Clavier, two books of incredibly rich keyboard genius and a fragrant influence on Mozart, Beethoven, Chopin and Brahms. A supreme player of all things Bach, Schiff (left) articulates Schnabel’s statement as only he can, intuitively breathing new spirit into The Well-Tempered Clavier, revealing its nuances, rhythmic sensibility, grandeur, intimacy and wit (to paraphrase the critic Paul Griffiths’ liner notes). This is a vintage outing from a master at the top of his game, vibrantly captured by ECM.

(The classical recording process, it’s worth noting, was reinvented a scant 30 years by the Canadian iconoclast Glenn Gould, the prime Bach interpreter of his time and arguably of all time. In his initial recording of another Bach pianistic triumph, the Goldberg Variations, released in 1955, Gould had only begun to tap into the potential of what could be achieved in a sealed, state-of-the-art acoustic chamber. In 1982 he achieved perfection in his landmark second record, forever transforming the studio environment into the ultimate proving ground for a soloist.)

With this recording, I had to do what I always do, of course: match up Schiff’s Well-Tempered Clavier with that of the young Austrian pianist Till Fellner, whose 2004 EMI release had been my favorite. Fellner’s light-fingered touch and the sonic warmth produced by ECM founder Manfred Eicher, justifiably considered a legend in the business, had me at note one. Now it would be Fellner vs. Schiff, mano a mano.

No doubt, both versions command attention. For me the challenge is in discerning the interpretive subtleties, and here is where the wisdom and perspective of age come into play. Fellner’s subtle dynamism notwithstanding, Schiff’s maturity and restraint are striking in the best-known passages and his palpable sensitivity to the material and its melodic flow shines throughout.

In an interview earlier this year, the artist provided some insight into his approach. The occasion was his “Bach Project,” an ambitious undertaking that includes performances of The Well-Tempered Clavier, French Suites, English Suites, Partitas and Goldberg Variations across North America through November 2013.

“There were touches of sentimentality that I didn’t consider sentimental at the time — and I don’t like sentimentality,” Schiff said, referring to the Bach recordings he made on the Decca label. “Perhaps you become more secure with age — you don’t feel the need to impress. You know that this [The Well-Tempered Clavier] is a great piece of music that can speak for itself.”

Schiff’s recording speaks to all of us.

Karl Schnittke moved from New York City to Atlanta 20 years ago. He is Publications Editor at the Atlanta Symphony Orchestra.