Changes are afoot at Georgia Shakespeare.

Gone, for at least a year, is the three-show summer repertory we’ve come to know. Instead, the company in 2013 will remount Mary Zimmerman’s Metamorphoses, which received rapturous reviews in 2006, and present the world premiere of the family show Mighty Myths & Legends, written by Producing Artistic Director Richard Garner. Both pieces focus on the myths of Ovid. Metamorphoses, you might recall, takes place within a large pool. It was the biggest seller in company history.

The changes were announced along with the 2013 season, which begins in May with Shakespeare in the Park (Much Ado About Nothing) and ends in the fall with a full-scale production of Hamlet. It will be the company’ 28th season.

Georgia Shakespeare is simply looking for a better way to do business, according to Garner. The company will add programming in 2014, based on what it learns in 2013. 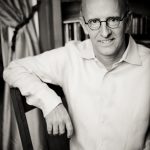 “We see the changes we are making for 2013 as a step in a longer-term process,” said Garner (left), “not as our final destination.”

It’s all about sustainability. The company, faced with having to close in late 2011, conducted an emergency “Save Georgia Shakespeare” fundraising campaign that surpassed its $500,000 goal. It’s now in the midst of an annual fundraising effort that hopes to generate $1 million by Jan. 31, 2013.

For tickets or more about the fundraising campaign, go HERE.