Theatrical Outfit begins its 35th season in little more than a month with Chaim Potok’s 1972 story about a young man torn between his religion, his family and his art.

Asher Lev previews Aug. 22-24, opens Aug. 25 and runs through Sept. 16. Before that, you can catch funny men Rob Cleveland (left) and Eric J. Little in The Adventures of High John the Conqueror (July 25-Aug. 12), an evening of stories and music celebrating one of America’s earliest and least-known folk heroes.

The rest of the Outfit season is as follows: 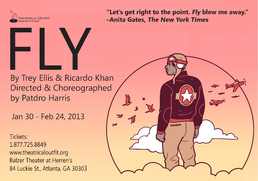 Fly. Jan. 30-Feb. 24, 2013. By Trey Ellis and Ricardo Khan. Travel with the dedicated and determined African-American men of World War II’s Army Air Corps. These Tuskegee Airmen, as they became known, show us what happens when the playing field is truly level.