SERENBE PLAYHOUSE turns 10 in 2019, and founder/artistic director Brian Clowdus has planned a season that speaks to the past, present and future of America. “I look forward to celebrating with stories that examine our similarities rather than our differences,” he said in a statement.

All Serenbe shows are site-specific, immersive and take place outdoors. Clowdus and team have staged Titanic on a ship that sank nightly in a lake, for instance, Carousel amid a full-fledged carnival and Miss Saigon with a genuine Vietnam-era helicopter that took flight during the fall of Saigon.

No casting has been announced and no directors have been named for the 2019 lineup.

The six-show season begins in March and features three full-scale musicals as well as a world premiere and its holiday shows, usually at Halloween and Christmas. Season tickets go on sale Nov. 26 HERE or at 770.463.1110. Single tickets go on sale later. Serenbe is in Chattahoochee Falls, about 25 miles west of Hartsfield-Jackson Atlanta International Airport. Here’s a closer look at the season.

Shenandoah. MARCH 13-APRIL 7. The 1974 musical, set during the American Civil War, tells the story of the Anderson family’s struggles, heartbreak and hope amid tragedy. The Broadway original was nominated for six Tony awards, including best musical, and won two — best actor/musical for John Cullum and best book. The Serenbe production will be staged alongside a Civil War re-enactment. 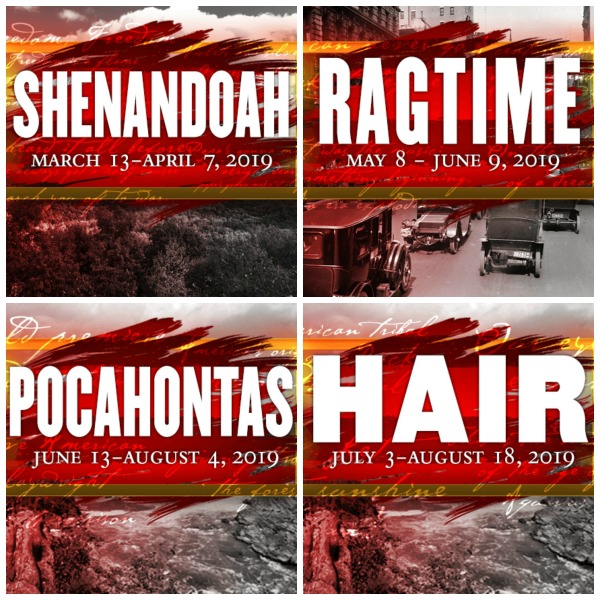 Ragtime. MAY 8-JUNE 89. One of the finest American musicals ever created. Arguably. It’s based on the 1975 E.L. Doctorow novel of the same name and tells the diverse stories of African-Americans (especially Coalhouse Walker Jr. and his sweetheart, Sarah); Jewish immigrants (Tateh and his  daughter); and the elite upper-class (through the characters of Father, Mother and Younger Brother). Real-life characters — Harry Houdini, Henry Ford, Booker T. Washington and anarchist Emma Goldman — are mixed in. Ragtime was nominated for 14 Tony awards in 1998, winning four — book by Terrence McNally, original score by Lynn Ahrens and Stephen Flaherty, featured actress for Audra McDonald (Sarah) and orchestrations by William David Brohn.

Pocahontas. JUNE 13-AUG. 4. A world premiere adaptation from Kara Morrison, a Native American playwright. Pocahontas will await you in the forest to tell a tale of her beautiful, beloved homeland.

Hair. JULY 3-AUG 18. Subtitled The American Tribal Love-Rock Musical. Serenbe revives the show it first staged in a meadow in 2013 to help mark the 50th anniversary of Woodstock, the three-day peace and music festival in Bethel, N.Y., in 1969. Hair, the first true rock musical, tells the story of the “tribe,” a group of politically active, long-haired hippies living a bohemian life and fighting against conscription in the Vietnam War. They struggle to balance their lives, loves and the sexual revolution with their anti-war sentiment, their parents and society. Hair opened off-Broadway in 1967, on Broadway in 1968 and has been revived four times, most recently in 2011. It earned 10 Tony Award nominations and was named best musical revival in 2009.