ABOVE: Josh Lamon (from left), Beth Leavel, Brooks Ashmanskas, Angie Schworer and company in a scene from the new musical comedy “The Prom.” Photo by Deen van Meer.

THE PROM, the new American musical born in 2016 at the Alliance Theatre, opened on Broadway on Nov. 15 to positive reviews from The New York Times, Deadline Hollywood, Variety, the Hollywood Reporter and the Wall Street Journal. 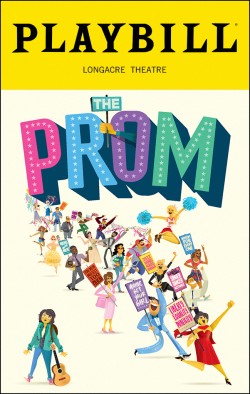 The show, the ninth Alliance production to reach Broadway since 1996, looks at what happens when four stars leave the bright lights of Broadway and take leading roles in a small-town controversy that’s making national headlines. The controversy: a shy lesbian in Indiana wants to take her date to the high-school prom.

The creators — book by Bob Martin and Chad Beguelin, songs by Beguelin (lyrics) and Matthew Sklar (music) — have on their combined résumés The Drowsy Chaperone, that delightfully dizzy 1920s showbiz spoof, and The Wedding Singer, an underrated show about an entertainer so humbled he winds up in a dumpster. Tony Award winner Casey Nicholaw again directs and choreographs.

The show has an open-ended run at the Longacre Theatre on West 48th Street. Here’s a recap of what the critics said.

JESSE GREEN OF THE NEW YORK TIMES: “A joyful hoot with kinetic dancing, broad mugging and belty anthems that make you believe in musical comedy again. These days, that takes some doing. How, after all, with so much pain in the air and so many constraints on what’s allowed to be funny, do we find the heart and permission to laugh? … Delicious despite its flaws, moving so  fast that you can hardly see the cracks in the road. …  Consistently delivers on its entertainment promises as well as its Golden Age premise: that musicals, however zazzy, can address the deepest issues dividing us.”

GREG EVANS FOR DEADLINE HOLLYWOOD: “As the full-of-themselves hoofers and belters, Beth Leavel, Brooks Ashmanskas, Christopher Sieber and Angie Schworer, along with their more spirited than effective publicist, played by Josh Lamon, chew the scenery to great delight, descending on small-town America like bedazzled locusts. Their big numbers — “Changing Lives,” “It’s Not About Me,” “The Lady’s Improving” — show just the hoped-for levels of All About Eve self-satisfaction anyone could want.”

FRANK RIZZO FOR VARIETY: “This original musical has laughs, tears and joy — not to mention jaw-dropping star turns — in a clash-cultures hoot that earns a big Broadway corsage. … It’s a 21st century Bye Bye Birdie, with showbiz interlopers causing havoc before finding their better selves — but reimagined with a millennial slant and an echo of Dear Evan Hansen empowerment. … Matthew Sklar’s easy melodies and Chad Beguelin’s witty lyrics are a mix of classic Broadway show tunes (for the adult players) and exuberant or wistful pop songs (for the younger ones). Nearly everyone gets their musical moment or two.”

DAVID ROONEY FOR THE HOLLYWOOD REPORTER: “If Forbidden Broadway and the John Hughes teen films that ruled the ’80s had a queer baby, it might look something like the frothy new musical comedy, The Prom. That means the show is one part satire, packed with delicious theatrical in-jokes delivered with aplomb by game stage veterans playing caricatures of themselves; and one part inclusivity teaching moment, reminding us there’s a place for everyone beneath the Mylar balloons at a high school dance, even in conservative Indiana. If the two halves aren’t entirely seamless, especially in the uneven second act, the show has enough humor and heart to paper over the cracks. Any musical that makes it to Broadway these days without a familiar movie source or a popular jukebox score is an achievement, so this original story is a rainbow unicorn that wins points right there. Although The Prom will not go down as a classic, it’s an enjoyable, old-fashioned entertainment that provides a tonic for these bellicose times.”

TERRY TEACHOUT FOR THE WALL STREET JOURNAL: “The results are a bit sanctimonious in spots, but most of The Prom is really, really funny — and much of it, to my happy surprise, is funny at the expense of the good guys. … This show is clearly aimed at those who already think that anyone should be able to bring anyone else to the senior prom. Should you fit the bill, The Prom will make you laugh — I can’t remember the last time I laughed so hard at a new musical — and it will also fill you with the toasty-warm glow of unchallenged righteousness. That’s a surprising combination, especially nowadays.”

Atlanta’s Alliance, one of the largest regional theaters in the Southeast, has incubated eight musicals and two plays with Broadway aspirations. Eight have made the jump successfully. Two have yet to get there. This rundown begins with the most recent shows first and includes when each ran, how long and whether it received any Tony Award nominations.

TUCK EVERLASTING. Opened in spring 2016 and had a five-week run (39 performances excluding previews). It received a Tony nomination for Gregg Barnes’ costume design.

BRING IT ON: THE MUSICAL. Opened in summer 2012 and ran for more than five months (171 performances excluding previews). It received Tony nominations for best musical and Andy Blankenbuehler’s choreography. It toured nationally for seven months in 2011/12.

THE LAST NIGHT OF BALLYHOO. Alfred Uhry’s comedy was commissioned for the 1996 Olympic Arts Festival and ran on Broadway for almost 1.5 years (556 performances excluding previews). It was nominated for the Pulitzer Prize, won the Tony Award for best play and earned three performance nominations — for featured actor Terry Beaver and featured actresses Dany Ivey and Celia Weston.

SO LONG ON LONELY STREET. The Sandra Deer-penned comedy opened in spring 1986 and ran about 1.5 months (53 performances excluding previews).

Two Alliance-incubated shows with Broadway aspirations have not made it yet. The 2014 musical Bull Durham announced a tentative spring 2017 opening, according to Playbill.com, but that date came and went. The 2012 musical Ghost Brothers of Darkland County by Stephen King and John Mellencamp also took aim at Broadway. A concert version toured the South and Midwest in 2013.