IN THIS COMPUTER AGE, whole financial empires are built upon the organization of goods and data, helping (or forcing) us to categorize the things we consume — be it food, ideas or music. Leonard Bernstein couldn’t abide that sort of thinking. And so it was, two weeks before the 1957 Broadway premiere of West Side Story, that he sat down to compose retroactive “journal entries” going back nearly nine years. His purpose: to reconstruct a chronology of the show’s creation.

Lenny was not one to color inside the lines. In his world, art was life and life was art. This was his story, and he chose the medium in which he’d share it — even if it required some artistic license.

“6 January 1949, Jerry R called today with a noble idea,” he wrote in September 1957, “a modern version of Romeo and Juliet, set in slums at the coincidence of Easter-Passover celebrations. Feelings running high between Jews and Catholics. Former: Capulets, latter: Montagues. Juliet is Jewish. Friar Lawrence is a neighborhood druggist. Street brawls, double death — it all fits.”

Both Bernstein and “Jerry R” — director/choreographer Jerome Robbins — were sons of Jewish immigrants. New York’s Lower East Side had given both men front-row seats to tensions between ethnic groups. A project tentatively called East Side Story began to ferment. As a next step, they recruited playwright Arthur Laurents to write the book. Artistic differences and Bernstein’s travel schedule soon stalled discussions. The idea was mothballed.

After World War II, gangs of young people spread throughout New York City’s boroughs. Members typically ranged in age from 12 to 19, and their main concern was territory. They were neither drug dealers nor drug users, for the most part. But they would “rumble,” fighting with fists, baseball bats, chains and knives; sometimes negotiating the time and place of their battles in advance.

“My office is on Lexington Avenue and 74th Street and just 20 blocks away life is entirely different,” Robbins said in a 1957 interview. “Those kids live like pressure cookers. There’s a constant tension, a feeling of the kids having steam that they don’t know how to let off.”

Gang violence was a recurring theme in newspapers. It was just such a story that woke Bernstein, Laurents and Robbins to the social relevance of their modern-day Romeo and Juliet.

They dropped the religious pretext for a timelier scenario, using the migration from Puerto Rico to New York as their backdrop. Pitting a gang of white street thugs against the darker-skinned newcomers, the “Romeo project” began to take on a life of its own. Bernstein found his creative fire in the rhythms and harmonies of Latin music.

Of course life didn’t pause for West Side Story. The three original creators were heavily committed to other projects, including an international conducting schedule, Hollywood films, ballets and plays, not to mention Bernstein’s ongoing work on his operetta Candide. He opted to enlist the help of a 25-year-old protégé of Oscar Hammerstein II: an American songwriter named Stephen Sondheim.

Sondheim would go on to become the driving force in American musical theater in the second half of the 20th century — A Funny Thing Happened on the Way to the Forum, Company, Follies, A Little Night Music, Sweeney Todd, Sunday in the Park With George, Into the Woods, Passion, Assassins — but at the time was most definitely the new kid on the block.

Initially, he was to be credited as co-lyricist, but his rhymes were so exceptional that Bernstein (quite magnanimously) gave him full credit.

West Side Story opened Sept. 26, 1957, at the Broadway Theatre. In 2000, Sondheim shared a memory with New York Times columnist Frank Rich about an unhappy patron leaving the theater during the show’s second-ever performance.

“He wanted a musical,” Sondheim recalled, “meaning a place to relax before he has to go home and face his terrible dysfunctional family. Instead of which he got a lot of ballet dancers in color-coordinated sneakers snapping their fingers and pretending to be tough.” 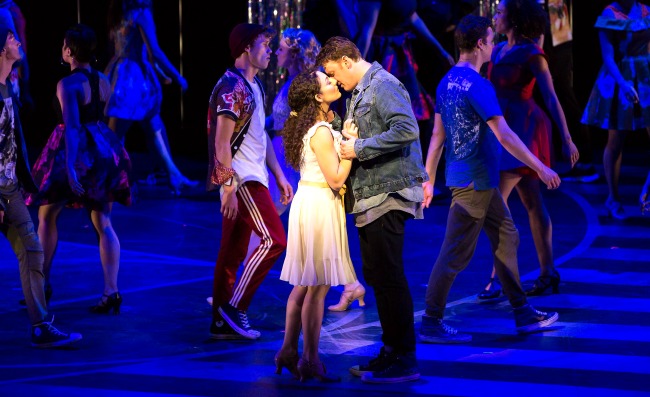 West Side Story “upended the genteel conventions of an American art form,” Rich wrote in his Times piece. “The future’s possibilities seemed boundless, for both the musical theater and the four young artists retooling it.”

And it was a shock to the system. West Side Story was snubbed at the 1958 Tony awards in favor of Meredith Willson’s sunnier The Music Man. The 1961 movie with Natalie Wood and George Chakiris, however, won 10 Academy Awards.

West Side Story wasn’t Bernstein’s only big news in 1957. He also became music director of the New York Philharmonic. Four years later, he organized an orchestral suite from the show for a musicians’ pension fund benefit.

In transporting the piece from pit orchestra to symphony orchestra, his orchestrator beefed up the strings, used fewer saxophones, more orchestral winds and eliminated the vocal lines. And he added violas, which had been cut to make room for extra percussion in the theater pit. That’s how West Side Story made the leap from Broadway to the classical music world.

If that didn’t secure its leap into opera, Bernstein, himself, gave it the shove. In 1984, he returned to the studio to make a new West Side Story recording. The singers included Jose Carreras, Marilyn Horne,  Kiri Te Kanawa,  Kurt Ollmann and Tatiana Troyanos. From contemporary accounts, one gets the impression he was trying to come closer to the music he heard in his head.

“l’d always thought of West Side Story in terms of teenagers,” he told Humphrey Burton of Gramophone magazine, “and there are no teenage opera singers, it’s just a contradiction in terms. But this is a recording and people don’t have to look 16, they don’t have to be able to dance or act a rather difficult play eight times a week. And therefore we took this rather unorthodox step of casting No. 1 world-class opera singers.”

The Atlanta Opera stages West Side Story to celebrate the 100th anniversary of Bernstein’s birth. It’s possible that not even the mercurial composer imagined a new generation of opera singers who would add serious acting and dancing chops to their vocal prowess. But that day is here. And it is a great thing for opera.