as a ghost story wrapped in America’s music,

HE WAS AN ADDICT, but his fluency of invention surpassed nearly every other figure in music. The tug between his genius and his tragic flaw set into motion the almost Shakespearean life of jazz legend Charlie Parker. But this opera isn’t just a history play. It’s ultimately about modern America: our music, our opioid crisis and our racial inequity.

The idea of basing an opera on Charlie Parker touched a nerve for librettist Bridgette A. Wimberly: She’d had an uncle who idolized him. As a young man, her mother’s brother became a sax player and a heroin addict. He played with Parker in a Cleveland nightclub and, like his muse, died young.

At the outset of the YARDBIRD project, Wimberly immersed herself in Parker’s recordings, interviews, biographies and contemporary accounts until she found the story she wanted to tell: a flight of fancy into what happened during the three days Parker lay dead and misidentified in a New York City morgue.

Those who’ve known an addict will recognize the diseased web that Parker spun: lies, theft, deception, broken promises, money troubles and abandonment. Even the premise of Wimberly’s tale captures the mindset of an addict: As long as his misdeeds remain secret, they never happened. Composer Daniel Schnyder’s opera is a ghost story. The title character believes he can go on with his life as long as no one realizes he’s dead.

It seems providential. Parker could never really be encircled, as biographer Stanley Crouch says, relating an episode that would repeat itself over and over again. “The rhythm section had him by the tail, but there was no holding or cornering Bird,” Crouch writes. “Disappearing acts were his specialty. Just when you thought you had him, he’d move, coming up with another idea, one that was as bold as red paint on a white sheet.”

in YARDBIRD, Charlie Parker hides behind the confusion over his corpse, and sets out to write his masterpiece — a reference to his interest in writing music more in the style of Stravinsky or Bartók.

Never one to look back, Charlie’s ghost plunges into his art. Death has other ideas. One by one, the most important people and events in his Parker’s life return to encircle him like a blanket. In the end, he gives up on composition and sings the finale, “I know what the caged bird feels.” Here, Schnyder sets a text from the poem Sympathy by Paul Laurence Dunbar.

Charles Parker Jr., aka Yardbird or Bird, was born Aug. 29, 1920, in Kansas. His mom, a single mother, put an alto saxophone in his hand when he was 11. A few years later he left school to focus on music, teaching himself to play in all 12 keys (unconventional for jazz musicians). This became his foundation for blowing the top off all melodic possibilities. 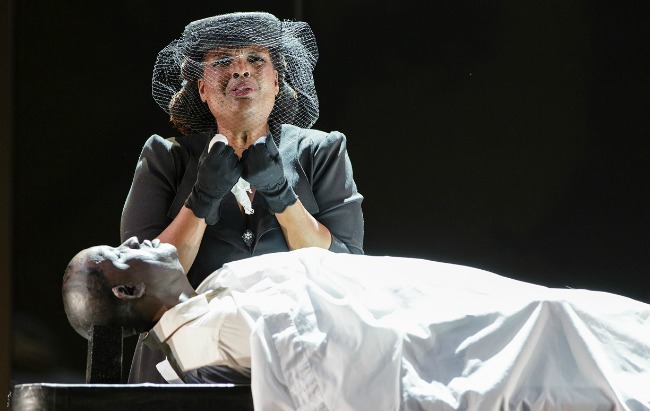 By 16, Parker was already abusing heroin and alcohol. When jazz drummer Jo Jones came to town, Parker sat in on an open jam. He launched into one of his signature chromatic odysseys. That day, however, he couldn’t find his way back into the tune. Jones became angry and hurled a cymbal at him. Humiliated, Charlie went home and doubled down until he mastered the music that swirled inside his head. Schnyder gives the character of Charlie a similarly virtuosic style, pushing the tenor to the outer extremes of his range and incorporating transcriptions of actual Parker solos.

At 19, Parker moved to New York City. Throughout his 20s he, along with Dizzy Gillespie and Thelonious Monk, pioneered a new kind of jazz known as bebop.

Parker married four times (three of his wives appear in the YARDBIRD ensemble). He fathered a son while still a teen in Kansas City but had little to do with the boy.

He had two more children with Chan, his common-law wife. In 1954, their 3-year-old daughter, Pree, died of cystic fibrosis. This tragedy sent Parker into a tailspin, and he landed in a California mental hospital, where he spent six months. 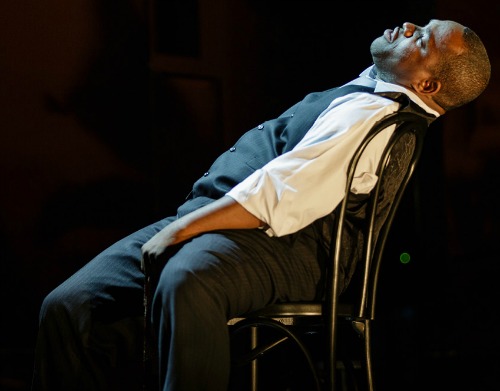 Parker lived his last days in New York’s Stanhope hotel, in the suite of Baroness Pannonica de Koenigswarter, known as Nica, part of the famous and wealthy Rothschild family. She tried to get him to check himself into a hospital, but he refused. The official record indicates he died of pneumonia and a bleeding ulcer, although he also had a heart attack and advanced cirrhosis of the liver.

Nica, whose building was segregated, feared eviction. Her efforts to conceal Parker’s death delayed by five hours the delivery of his body to the morgue and caused confusion over his identity. Tabloids ran the headline “Bop King Dies in Heiress’ Flat.” Nica lost her apartment, her husband and custody of her children and was disowned by her family.

The coroner registered Parker under the wrong name and estimated his age at 60. He was 34.

Charlie Parker’s YARDBIRD takes place in the nightclub that bears — or capitalized on — his name: Birdland, a New York club that opened in December 1949. Parker headlined there for a short time but fell out of favor with the owners because, co-owner Oscar Goodstein said, “He was continually wanting money.”