The company has also announced that managing director Lee Nowell, who joined Synchronicity in 2015, is stepping down as of June 30 to concentrate on her playwriting and other creative projects. Virginia (Gin) Nugent comes on board July 1 as interim managing director. The board of directors will begin a search for a permanent managing director in mid-July. Nugent, an Australia native, has spent 20 years in arts management and leadership positions around the United States.

Synchronicity’s 21st season features three pieces by women playwrights in the Bold Voices series (contemporary plays for adults) and two Family Series musicals, including the return of A Year With Frog and Toad. It includes a new season of Stripped Bare: Arts Incubator Project offerings (Sept. 10-12, Nov. 12-14, Jan. 14-16 + May 13-15), the annual Women in the Arts Panel Luncheon (April 2019), and the Playmaking for Girls and Playmaking for Kids programs.

The company is dedicated to smart, gutsy, bold theater, producing work by female playwrights and raising the voices of women and girls.

Synchronicity, led by co-founder and producing artistic director Rachel May, performs in its own 138-seat space in Midtown’s One Peachtree Pointe building. Subscriptions ($40-$272) are available for Family Series shows only, Bold Voices shows only, the entire five-show season or a 10-pack that can be used as you wish. Single-show tickets will go sale closer to the start of the season. Details HERE or at 404.484.8636.

Here’s a closer look at what’s lined up.

SEPT. 27-OCT. 21. Bold Voices. Welcome to the world of King Charles II (1660-1685) and the actress Nell Gwynn, his most famous mistress. Olivier Award-winning British playwright Jessica Swale charts the rise of an unlikely heroine in this comedy, from Nell’s roots in London’s Coal Yard Alley, to her success as Britain’s most celebrated actress and her hard-won place in the heart of the king. At a time when women are second-class citizens, can her charm and spirit protect her from the dangers of the court?

A Year With Frog and Toad 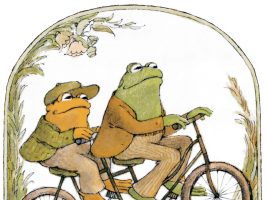 JAN. 30-FEB. 24, 2019. Family Series. Ziggy wants to go out and enjoy his beautiful island in the sun, but the fear of evil spirits, tropical storms and bandits keeps him inside. With the help of a few feathered friends, he faces his fears and is reminded — in six-part harmony — that “every little thing gonna’ be alright!” The music and lyrics come from reggae legend Bob Marley; the story comes from his daughter Cedella. Adapted for the stage by Michael J. Bobbitt, with additional music and lyrics by John L. Cornelius II. Performances: 7 p.m. Friday, 1 + 4 p.m. Saturday, 2 + 5 p.m. Sunday.

APRIL 12-MAY 5, 2019. A new drama by Chicago-based playwright Aline Lathrop. Cameron doesn’t remember what he does at night, and Karyssa doesn’t tell him. He just retired from the Navy SEALs and most of his life has been classified. What’s left, he mostly doesn’t want to discuss. By day, they negotiate dinner plans, career ambitions and video games. By night, he’s more available and more dangerous. The story moves forward in time, flipping back and forth between short daytime and shorter nighttime scenes, as Karyssa tries to connect with Cameron through nostalgic Skype sex and secretly learned Arabic sleep talk. In the end, she’ll risk both of their lives to reach him. A joint premiere with 16th Street Theater in suburban Chicago.

JUNE 6-30, 2019. A new play by California playwright Kimberly Monks, workshopped in Synchronicity’s 2018 SheWRITES New Play Festival. Thomas is an unapologetic racist. An unexpected encounter lands him in a new family — and a new skin tone. This pointed comedy examines what it’s like when your world is turned upside down and you’re forced to look at life through a different lens. Hands of Color asks: Is redemption possible for the unredeemable?