Alliance artistic director Susan V. Booth talks about Candide, a historic collaboration with the ASO’s Robert Spano, puppets and the best of all possible worlds.

IN THE WANING MONTHS of its nomadic 2017/18 season, one might think the Alliance Theatre would choose something less daunting than Candide.

But, no. Artistic director Susan V. Booth isn’t known for taking the simple route or choosing an easy crowd-pleaser to fill a slot. Instead, she’s joining forces with the Atlanta Symphony Orchestra’s Robert Spano for a multidimensional concert staging of Leonard Bernstein’s epic Candide.

The best of all possible worlds, indeed.

Candide, a colossal adventure tale that lampoons 18th-century optimism, came to life in 1759, written by the French philosopher Voltaire in the Age of Enlightenment. It follows the callow young title character, who leaves his idyllic life and great love, named Cunegonde, for a globetrotting journey that spans many years, many misfortunes and many catastrophes.

Candide’s tutor, Dr. Pangloss, has told him that he’ll enjoy the “best of all possible worlds” and always know that “everything is for the best.”

Words to live by? Not so fast. Because of its difficulty factor, not every Candide has found success. But Booth, who directs, likes a challenge.

“The older I get, the more the ‘impossible’ is like catnip,” she says. “Some people climb mountains. I try to do things I have no idea how to do. This would be the latter.”

Candide, a musical theater/opera hybrid has been fiddled with a great deal since its 1956 Broadway premiere, which ran a mere two months but did showcase a young Barbara Cook as Cunegonde. Among other criticisms, playwright Lillian Hellman’s script was considered too serious for Voltaire’s intentions.

A 1974 Broadway revival, with a new book by Hugh Wheeler (A Little Night Music, Sweeney Todd), fared much better. It ran almost two years and won eight Tony awards, including one for Wheeler. His is the version Alliance audiences will see.

Booth’s connection to Candide dates to her days onstage as an undergraduate at Denison University in Granville, Ohio. She “had absolutely no idea what I was singing about until we got to the end,” she says. Now she’s determined not to replicate that experience for either actors or audience. “It’s dense, sure, but it’s not impenetrable.”

When she saw a Goodman Theatre/Shakespeare Theatre Company co-production in Chicago several years ago she recalls thinking: “Good Lord, this show is impossible to stage.”

So, send in the puppets.

Booth has conceived for her staging a film component that uses puppetry and visual storytelling created in concert with Brooklyn-based artist Matt Acheson.

Acheson spent months creating 46 miniature objects and environments for Candide. He’ll spend every performance in a small station behind a tiny toy theater above the Symphony Hall proscenium and manipulate the puppets to help tell the story. These scenes are projected “onto sails over the orchestra, so everything will circle around on itself in a very awesome way,” he says.

His creations range from small sheep and replicas of various characters (in matching costumes), to a volcano that erupts, wooden boxes that create mechanical waves, and a cosmic switchboard with “disasters and miracles” on it. He provides the horrors that Candide encounters everywhere: war, poverty, a tsunami, earthquakes, a fire that kills thousands and countless examples of man’s inhumanity to man.

Acheson, billed as puppet master, sees his role as the one asking questions on behalf of humankind. Is a higher power in control? If so, how much control does that higher power have? What about free will?

“It’s all a very nice dance between absurdity and reality,” he says. 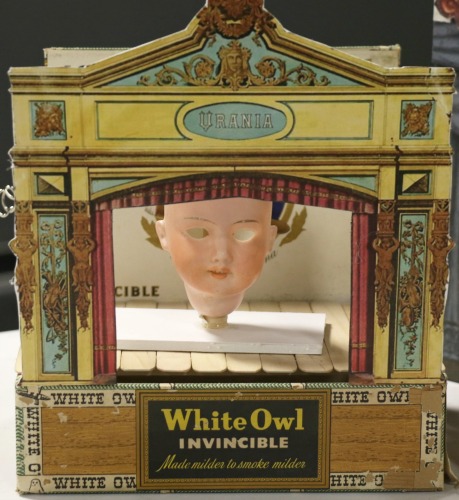 Spano, the ASO’s music director, will be in front of the stage, conducting the full orchestra, the ASO Chorus and a 17-member cast at every performance. That cast is led by tenor Aaron Blake as Candide; soprano Alexandra Schoeny as Cunegonde; two-time Tony nominee Christopher Sieber (The Prom) as Pangloss; and Terry Burrell (the Alliance’s Hospice and Ethel, Theatrical Outfit’s Lady Day) as the Old Lady.

It’s a bit of a full-circle moment for Spano and Booth.

He invited her to dinner when she came to the Alliance in 2001. They talked about working together someday. “While it took a hot minute,” Booth says, “I’m delighted it’s finally happening.”

It’s clear she has dazzling expectations for this Candide. And she’s elated with Spano’s partnership. “He just lights up your head and your senses like no one I’ve ever met,” she says. “I’m over the moon.”

And deeply into the catnip.

“I am first and foremost a sucker for a good story,” she says, “and Candide is a whopper of a tale with a deeply moving ending, not so much of optimistic hope as resolved resilience. That feels like a parable we could use right now.”