[MORE: THE STAGES OF WINTER —  ENCORE’S PICKS OF THE SEASON]

** The Ballad of Klook and Vinette. THROUGH FEB. 18. American premiere. Horizon Theatre begins its 2018 season with a contemporary love story that comes with a soulful jazz score. Klook is a drifter who’s tired of drifting; Vinette is on the run but doesn’t know what’s chasing her. Together, they make a tentative stab at love. Amari Cheatom (a Freddie Hendricks Youth Ensemble of Atlanta alum, the film Django Unchained) is Klook. Brittany Inge (Horizon’s Blackberry Daze) is Vinette. The script is by Lond0n-based playwright Ché Walker, who directs. Music and lyrics by Anoushka Lucas and Omar Lye-Fook, with musical direction by Atlanta’s Christian Magby. $23 and up, plus fees. 8 p.m. Wednesday-Friday; 3 + 8 p.m. Saturday; 5 p.m. Sunday. N0 show Feb. 4 (Super Bowl Sunday). 1083 Austin Ave. at Euclid Avenue. Details, tickets HERE or at 404.584.7450. 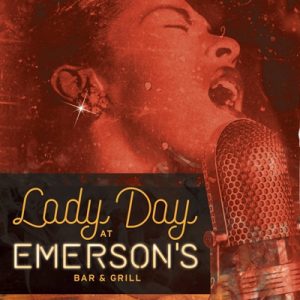 ** Lady Day at Emerson’s Bar & Grill. THROUGH FEB. 4. Highly recommended. At Theatrical Outfit. Singer/actor Terry Burrell shimmers in this bruising bio of jazz singer Billie Holiday, performing months before her death at age 44. It’s Philadelphia, 1959. The evening, both intimate and epic, includes stories about Lady Day’s down-and-out life and a song list that includes “God Bless the Child,” “Strange Fruit,” “What a Little Moonlight Can Do” and about a dozen others. Burrell’s considerable credits include Thoroughly Modern Millie, Dreamgirls and Into the Woods on Broadway; Lady Day off-Broadway; and Ethel, among others, at the Alliance Theatre. $18-$51. 7:30 p.m. Wednesday-Friday; 2:30 p.m. Jan. 25, 27-28 and Feb. 1, 3, 4. Balzer Theater at Herren’s, 84 Luckie St. NW. Details, tickets HERE or at 678.528.1500.

Native Guard. THROUGH FEB. 4. Alliance Theatre at the Atlanta History Center. A reprise of the 2014 staging based on poet Natasha Trethewey’s Pulitzer Prize-winning collection, which juxtaposes her life as a mixed-race child with the lives of the Native Guard — black soldiers fighting for the Union in the Civil War. The twist this time: It’s performed near the History Center’s Civil War exhibition. The entire cast returns: Neal A. Ghant as the Native Guard, January LaVoy as the Poet, vocalist Nicole Banks Long and composer/music director Tyrone Jackson. Recommended for age 12 and up. $20-$47; $10 teens. 7:30 p.m. Tuesday-Thursday; 8 p.m. Friday; 2:30 + 8 p.m. Saturday; and 2:30 + 7:30 p.m. Sunday. 130 West Paces Ferry Road NW. Details, tickets HERE or at 404.733.5000.

Tenderly: The Rosemary Clooney Musical. CLOSES SUNDAY. At Georgia Ensemble Theatre. Described as a “fresh, personal and poignant” picture of the singer/actor who became a Hollywood legend. Tenderly follows Clooney (1928-2002) from her Kentucky childhood to Tinseltown and beyond, showing the bumps, bruises and successes along the way. The score includes “Come On-a My House,” “It’s Only a Paper Moon,” “Count Your Blessings,” “Hey There,” “Mambo Italiano” and more. The cast: Rachel Sorsa as Clooney and Mark Cabus as the Doctor (and 11 other roles). $30-$46. 8 p.m. Thursday-Friday; 4 + 8 p.m. Saturday; and 2:30 p.m. Sunday. At the Roswell Cultural Arts Center, 950 Forrest St., Roswell. Details, tickets HERE or at 770.641.1260.

[MORE: THIS TOUR’S GROWN-UP NALA GREW UP IN NORCROSS]

** The Followers; A Retelling of the Bacchae. OPENS FEB. 3. At 7 Stages. The 38-year-old L5P company looks to ancient Greece for its first production of 2018. Euripides’ The Bacchae delves into opposite sides of human nature: the rational, civilized side represented by the king of Thebes (Lowrey Brown) and the instinctive side represented by Dionysus, the god of wine and ecstasy (Israel’s Ofir Nahari). This world premiere telling comes from Margaret Baldwin, an Atlanta playwright of note, and uses opera, dance, puppetry and physical theater to tell its story of blind faith, abuse of power and vengeance. Michael Haverty directs. Klimchak, who builds and plays unusual instruments, provides original music, with musical direction by Bryan Mercer, and Nahari choreographing. In the Back Stage Black Box. $15-$25 (Feb. 1 preview is $15). Through Feb. 25. 8 p.m. Wednesday-Thursday + Saturday; 5 p.m. Sunday. Also at 8 p.m. Feb. 5. 1105 Euclid Ave. NE. Details, tickets HERE or at 404.523.7647.

The Miraculous Journey of Edward Tulane. OPENS FEB. 2. At Synchronicity Theatre. Edward Tulane is an expensive toy rabbit made of china. He is loved by a little girl but has no interest in anyone but himself. He’s accidentally thrown overboard while at sea, and so begins his miraculous journey. This family-friendly adaptation is based on Newbery Medalist Kate DiCamillo’s 2006 novel. The cast: Josh Brook, Jimmica Collins, Caitlin Hargraves and Justin Walker. Mira Hirsch directs. Every Friday is PJs & Play. Kids in pajamas get complimentary milk and cookies. $15-$22. Through Feb. 25. 7 p.m. Friday; 1 + 4 p.m. Saturday; 2 + 5 p.m. Sunday. One Peachtree Pointe, 1545 Peachtree St. NE. Details, tickets HERE or at 404.484.8636.