Vogue magazine, for many, is a fashion bible. So it seems fitting that the Metropolitan Museum of Art’s next big Costume Institute exhibition is titled Heavenly Bodies: Fashion and the Catholic Imagination.

The exhibition opens May 10, 2018, and runs through Oct. 8 at three sites: the Anna Wintour Costume Center and the medieval galleries at the Met’s Fifth Avenue location and uptown at the Cloisters, near 190th Street in Washington Heights, about a 40-minute subway ride from Manhattan.

The gala, an annual fundraiser often referred to as fashion’s biggest night out, happens May 7 with Vogue editor Wintour, Italian fashion designer Donatella Versace, lawyer and activist Amal Clooney, and singer-actor-designer Rihanna among its honorary chairs.

It may seem controversial for the New York institution to take on Catholicism, but the theme has more to do with fashion design’s interpretation of religion and its use of religious iconography.

Andrew Bolton, Costume Institute curator, worked closely with the Vatican on the exhibit, and says: “The focus is on a shared hypothesis about what we call the Catholic imagination and the way it has engaged artists and designers and shaped their approach to creativity, as opposed to any kind of theology or sociology. Beauty has often been a bridge between believers and unbelievers.”

Bolton visited Rome eight times before the Vatican signed off on the exhibit. The Sistine Chapel Office for Liturgical Celebrations of the Supreme Pontiff gave its blessing. Representatives were receptive from the start but needed to be cautious and respectful of Vatican garments being loaned to the Met, some which are still used by the pope. 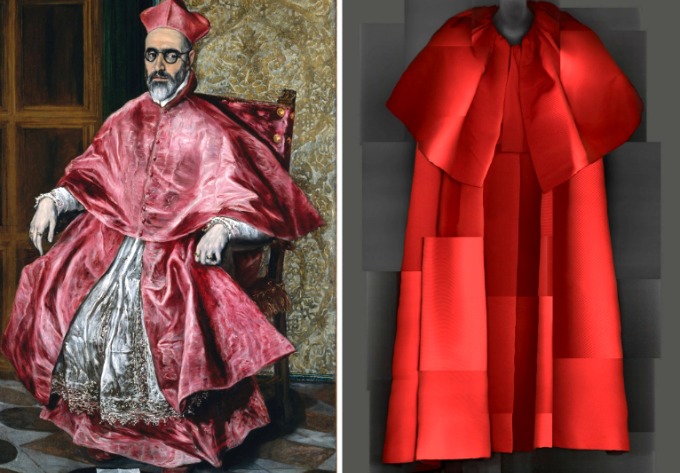