WITH A SIGNIFICANT NOD TO LEWIS CARROLL, THE ALLIANCE THEATRE FLAYS OPEN THE STRUGGLES OF MIDDLE SCHOOL’S ANGSTY DAYS AND NIGHTS.

Public performances of “Alice Between,” a world premiere, begin Sunday and run through Nov. 19 at the Rich Auditorium in the Woodruff Arts Center. Details, tickets HERE.

IN ALICE’S ADVENTURES IN WONDERLAND, the 1865 tall tale by Lewis Carroll, the main character falls down a rabbit hole. Then it’s just one nonsensical thing after another. 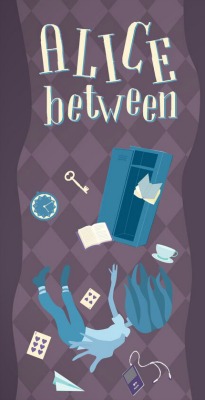 With Alice Between, which it commissioned for family audiences, the Alliance Theatre does a riff on Carroll’s fantasy, addressing the stings and arrows of those middle-school years.

As Alice begins, the title character is late, very late for her very important first day as a new student at Landwunder Middle School. She’s also lost, and no one at the ginormous place will tell her how to find the “700 hallway.”

We all know that middle school can be crazy. And cruel. In this chapter of life, kids are full of insecurities. Loyalties come and go and friendship trauma is constant. Who will be popular? Who will just get by, be labeled an oddball or, worse yet, a loser?

All of this angst, and more, lives in Alice Between.

At one point, Alice (Ashley Anderson) spats with a former friend (Lauren Boyd). An onlooker (Anthony Campbell) overhears and comments: “Wow, I’m starting to miss the part where they were trying to kill each other with a dodgeball instead of with words.”

Co-playwrights Neeley Gossett and Steve Coulter have set their Alice in a present-day middle school, developing the script with significant input from metro middle-schoolers themselves.

Since Alice Between lies in his jurisdiction, we asked Christopher Moses, associate artistic director and education director, for a little insight on the Alliance’s programming for family audiences.

QUESTION: How, and with whom, did Alice Between begin?

MOSES: Rosemary Newcott [the Alliance’s director of theater for youth] had the idea of using Alice in Wonderland as a metaphor for the middle-school experience.

A: A girl falls down a rabbit hole and into an illogical world. She experiences this madness, this world that follows a set of indecipherable rules. We’ve worked with, and heard from, so many middle-school students who’ve revealed that that’s exactly how it is for them. Their struggles and anxieties are very real. They almost feel as if school rules and regulations are sometimes working against them.

Q: Alice Between seems a bit like Alice in Wonderland-meets-Mean Girls because of its biting humor, doesn’t it?

A: Absolutely. There’s so much questioning and discovery in the formative years of middle school [along with] humor and absurdity that seems to be a hallmark of this period in our lives.

Q: Can you say more about the Alliance’s work with the middle-school audience?

A: We’ve had a commitment to developing new work specifically for them for years and always include them in the long artistic process. The play is not baked until we open, and it goes through a series of workshops — first with a wide array of middle-school students. We could not do this without their deep investment. Once the play is in formal rehearsals, the professional cast and creative team continue to mine the story for its truth.

Q: Often adults play students in these productions. Is that the case this time?

A: Yes. We hire young professional actors who have the ability, insights and experience to dive into a new script and a new story, and deliver the material. It’s also a practical matter. We tour the show to schools in the daytime.

Q: Alice Between has just five actors. How do you convey that this story is set in a place with many, many students?

A: The audience becomes part of the school population. It’s a fun conceit.