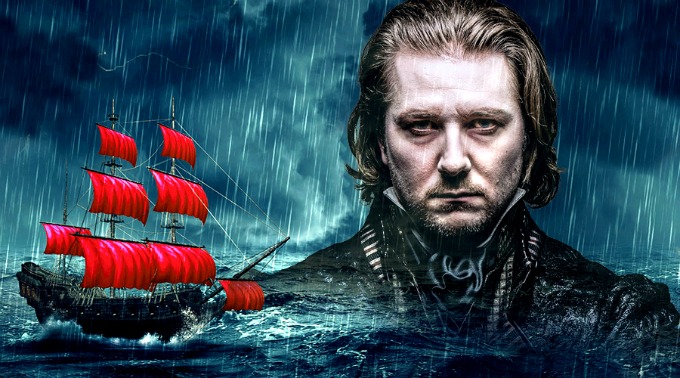 PEOPLE USED TO SPEAK of The Flying Dutchman as if it were a gateway drug to Wagner. Coming from the composer who inspired some of classic opera’s stereotypes (marathon singing by women in Viking helmets, for example), Dutchman is, as the story goes, a more easily digestible serving of Wagner. It’s short and entertaining.

In truth, since the advent of supertitles, all Wagner is entertaining. To understand Wagner fans, think of them as the original binge-watchers. Yes, “Game of Thrones” has swords, sorcery, warrior women, bastards, a cunning dwarf, incest, dragons and world domination, but Wagner wrote about all those things 150 years before George R. R. Martin.

Dutchman seems to bear a relationship to events in the composer’s life, which, given his proclivity for fantastical creatures, wasn’t always the case. In 1839, Richard Wagner had been serving as conductor at the Court Theatre in what’s now the Latvian capital of Riga, on the Baltic Sea. He and his wife, Minna, had lived extravagantly. When he lost his job, he decided to try his luck in Paris. As they prepared to leave, Wagner sold their furniture (some of which hadn’t been paid for) and held a benefit for himself. Not surprisingly, his creditors persuaded local authorities to seize his passport.

Under the cover of darkness, the composer, his wife and their pet Newfoundland stole past armed border guards and plotted an indirect route to the French capital (they also had to avoid German creditors). It was a harrowing overland journey.

By one account, their coach overturned, causing Minna to miscarry. In nine days, they traveled 270 miles to Baltiysk, where they dodged harbor police and boarded a ship bound for London via Copenhagen.

“This sea journey will remain eternally engraved on my memory,” wrote Wagner. “It lasted three and a half weeks [instead of one] and was beset by accidents. Three times we were caught in the most violent storms.” According to accounts, the captain was forced to steer the ship into a fjord.

How this journey found its way into Wagner’s work is rich fodder for discussions among Wagnerites (think Comic-Con fans). They are quick to point out, for example, that the composer suggested the granite walls of the fjord, not just in the scenery, but in how he divided his singers, scoring echoes right into the music.

“Sailing between the Norwegian reefs made a striking impression on my imagination,” Wagner wrote. “The legend of the Flying Dutchman, as confirmed by the sailors, took on a very definite and individual coloring in my mind such as only adventures at sea could inspire.”

According to tradition, both the ship and its captain are called the Flying Dutchman. Over the centuries, sailors have repeated this maritime legend, reporting and embellishing encounters with the ghostly vessel.

An 1881 journal entry by England’s Prince of Wales (future King George V) reported “a strange red light as of a phantom ship all aglow, in the midst of which light the masts, spars and sails of a brig 200 yards distant stood out in strong relief as she came up on the port bow … but on arriving there no vestige nor any sign whatever of any material ship was to be seen either near or right away to the horizon, the night being clear and the sea calm.”

The backstory to this legend set the stage for everything that happens in the opera: Hendrick Van der Decken, a Dutch sea captain, attempts to round the Cape of Good Hope in a squall. His crew begs him to take safe harbor, but the Dutchman retorts: “May I be eternally damned if I do, though I should beat about here till the day of judgment.” Presto change — his proclamation is his curse.

Certainly, Wagner’s 1839 journey put wind in his sails. One can even draw comparisons between the wandering seaman and the wandering composer: “I often seem to myself,” he wrote, “like the Flying Dutchman and his shipmates, who are tossed about forever on the cold waves.”

Beauty and the Beast

As the opera took shape the following year, however, it wasn’t the title character who emerged as the pivotal personality. It was the heroine, Senta. She is the Beauty to the Dutchman’s Beast.

As a girl, Senta sees her whole life laid before her: marriage, household duties, village life. She sees it and longs to escape it (not unlike Belle in Disney’s Beauty and the Beast). Wagner’s libretto, based on Heinrich Heine’s 1831 novel, argues that Senta and the Dutchman save each other: He is freed from his curse, and she is freed from banality.

Although The Flying Dutchman is Wagner’s fourth opera, you might call it the one in which Wagner becomes Wagner. It’s the earliest of his works performed regularly, and shows the mature composer for his striking originality and mastery of theater. Notice how he adds voltage to Senta’s appearance by keeping her out of sight until the opera’s midpoint. Then, at the moment when most composers would cue the soaring love duet, Wagner conjures a spellbinding stillness between the lovers.

Wagner’s imagination, at times, did exceed all practical considerations. At the end of The Flying Dutchman, it’s incumbent upon the stage director to interpret and communicate these directions:

“She throws herself into the sea. Immediately the Dutchman’s ship disappears in the waves. The sea rises high, and is then drawn down in a whirlpool. In the red light of the rising sun, the glorified forms of Senta and the Dutchman are seen, in a close embrace, rising from the wreck of the vessel and soaring upward.”

How does one stage that? Where do they go?

Wagner was nothing if not preternaturally ambitious. The roles he conceived, the vocal demands, the stagecraft, the orchestral demand, and the ideas contained within his output exploded art into a whole new realm, one that continues to sweep audiences into its embrace and carry them on an ecstatic joyride.