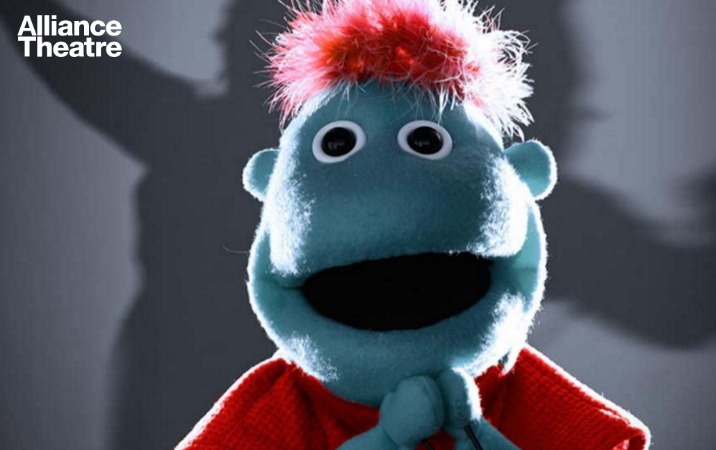 THE TIME IS NOW FOR THE INDELICATE HAND TO GOD, WHICH FITS NICELY WITH THE DAD’S GARAGE VIBE — AND DON’T SAY YOU HAVEN’T BEEN WARNED.

ON ONE HAND, you’re a good person.

Of course there are degrees and definitions of being a good person.

On the other hand, well, there’s the other hand. That’s the one that wants to tell the jerks of the world to put it in their patooties.

The black comedy Hand to God puts both hands in a blender and spits them out in a tornado of angst and hilarity.

This Robert Askins play, with a deliciously creepy puppetry element, ran off-Broadway in 2011/12 and again in 2014. The 2014 version won the Off-Broadway Alliance’s best new play award. A 2015 Broadway production earned five Tony nominations, including one for best new play.

Alliance Theatre Artistic Director Susan V. Booth has had her eye on this irreverent piece of theater, set mostly in the basement of a small evangelical Christian church in Cypress, Texas, for some time.

With its Woodruff Arts Center space under renovation, Booth decided the moment for Hand to God was now and that the gutsy, admittedly foul-mouthed comedy was a great fit for the risk-ready Dad’s Garage Theatre Company.

Directing is Booth’s friend and colleague Marc Masterson, who’s in his seventh and final season as artistic director at South Coast Repertory in Costa Mesa, Calif. “We’re gonna play, we’re gonna have fun, and we’ll make this thing our own,” he says.

The comedy centers on a teenager named Jason and his mom, Margery. Things have been shaky, especially since Jason’s dad died. Now Margery’s been hired to lead the church’s puppet club. She didn’t bargain for sock-puppet domination.

Masterson, 60, had no prior association with Hand to God. “I just started reading it and kept laughing out loud. That was a very good sign.”

Like the playwright, Masterson is from Texas. He says, jokingly, that he’s still “a recovering Southerner,” but that he’s never lumped all Southerners together. “I know the difference between North Carolina, Georgia, Mississippi and Texas.

These, says Masterson, are gifts from the playwright.

“Sometimes writers want it done the way they see it in their heads and that’s the only way that’s valid,” he says. But with Hand to God, five actors are invited to seize and run with the play’s adventurous spirit. “It’s left up to them to find their own path through the story.” (Those actors are Allan Edwards, Alexandra Fickens, Wendy Melkonian, Ben Thorpe and Patrick Wade.)

Masterson isn’t a puppet virgin, so to speak. One of his earliest professional jobs was directing at Lovelace Marionettes in Pittsburgh. “What I learned is that not every actor can project a personality onto an inanimate object, can make it come alive. It’s a different approach to acting and takes a special skill set.”

The dual role of the troubled Jason and his left-hand guy Tyrone (a rude, crude, sassy puppet) requires both mental and verbal gymnastics.

Masterson cast the 28-year-old Thorpe, a Snellville native making his Alliance Theatre debut. Thorpe calls the role the most challenging he’s ever had. He read the play almost daily last summer and planned to have his lines memorized before rehearsals began.

While studying musical theater at Point Park University in Pittsburgh, one lesson that stuck with him was this: “Always return to the text of the play.”

Certain lines jump off the page after repeated readings, Thorpe says. Things that happen when Jason is offstage say a lot about what his home life must be like.

Thorpe says he appreciates the play’s softer side and what it “might have to say about listening to your kids, and how kids can better listen to their parents, and how families and communities can take better care of each other.”

Masterson offers these instructions. “If you’re easily offended, it could be a rough night. Leave your inhibitions at the door. Come with an open mind and be ready to laugh. Even be ready to laugh at yourself.”