“Project Runway” airs at 9 p.m. Thursdays on the Lifetime channel.

SHE KEEPS TWO NOTEBOOKS by her bed. As thoughts and ideas invade her dreams, Kenya Freeman rolls over, jots them down and goes back to sleep. In the morning, when the alarm clock goes off, she glances at her notebooks, where inspiration often is born.

Freeman, the senior lead designer for the Atlanta-based Sylvia Mollie label, is living her dream, literally. She seeks inspiration from everything and everyone. If it isn’t in her dreams, she finds it in nature, in her surroundings, on the street. She’s always conceptualizing.

So, while the she’s living her dreams, it’s also fair to say that her future is now. She’s among the designers duking it out on Season 16 of Lifetime’s reality-TV design show “Project Runway.” We’ll give nothing away, but Freeman calls it “the best experience ever” and hopes the exposure will elevate the Sylvia Mollie line.

Freeman found fashion as a senior in high school, when she signed up for a fashion co-op class and learned to create mood boards and study merchandising. It came so easily that her mother enrolled her in fashion school.

In her first year in college, Freeman started sewing, watching her designs transform from sketches to garments. Everything still felt effortless and, for the first time, she felt like she’d been given a gift. She felt like a designer. There’s a lot to be said for a mother’s intuition. She eventually graduated with a B.A. in fashion design from American Intercontinental University in Atlanta.

Freeman embraces strong lines and architectural patterns in her designs and fabric choices. Shape and texture — the feel and the touch of a fabric — also are part of her brand’s DNA. Her aesthetic comes from the allure of the classic woman. So, who is the Sylvia Mollie “woman?”

First, she has a name. Freeman calls her “Tony,” and explains: “This is a powerhouse of a woman whose classic looks must transition to evening. Everything she wears has to be bold, beautiful and make a statement.”

Freeman’s personal and professional lives were uprooted, tested and turned upside down when “Project Runway” chose her as a cast member. Working under so much pressure wasn’t easy, she says, but she resolutely “made it work.” Producer and host Tim Gunn, by the way, is wonderful, she says. The warm, nurturing gentleman you see on television is the same off-the-air.

She’s contractually obligated to keep “Project Runway” secrets confidential but did say this: “It was great. It was emotionally draining. It was fantastic. It was exciting and stressful. I’ve never absorbed so much caffeine. I’ve never gotten up so early. Just to say that I am now a part of the ‘Project Runway’ family is something few can say.” 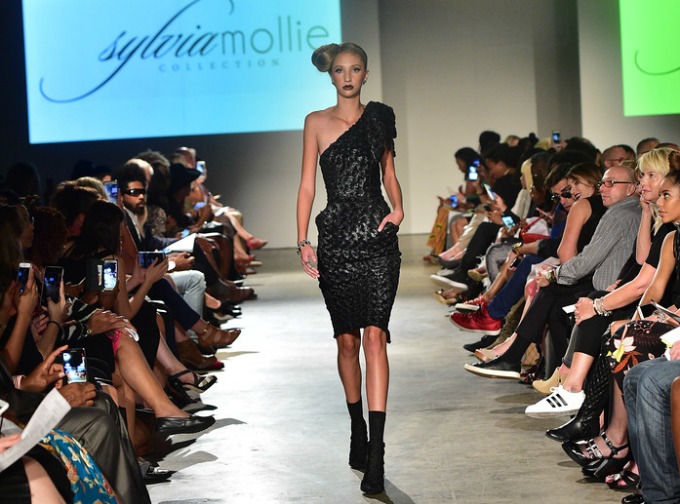 [KEEP UP ON ALL THINGS FASHION WITH THE FASHIONADO BLOG]