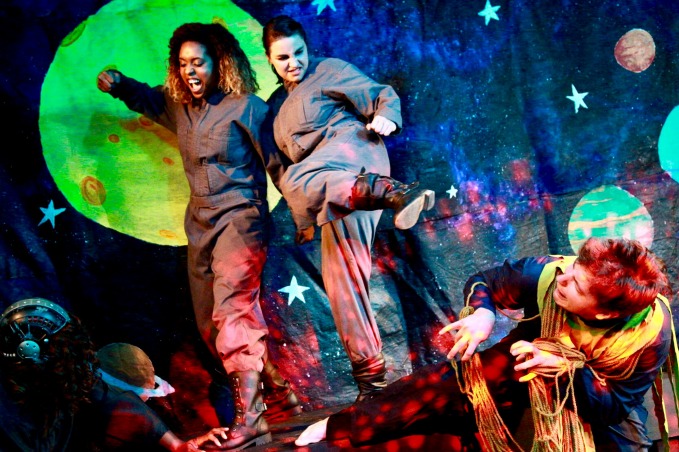 Ada and the Memory Engine. THROUGH AUG. 27. Audience and critical acclaim have greeted this script by Decatur-born, San Francisco-based playwright Lauren Gunderson, part of  this summer’s Essential Theatre Play Festival. The subject is Ada Lovelace (1815-1852), the British mathematician who became the world’s first computer programmer. In calling this 2015 bio-play a “rare and special artistic achievement,” The Huffington Post praised its intelligence, which, it seems, shines through here in a finely acted, if bare-bones, staging. Ashley Anderson is Ada, with Mark Cosby as the supportive, influential Charles Babbage. $20-$25. In repertory, check the schedule HERE. At the West End Performing Arts Center, 945 Ralph David Abernathy Blvd. Details HERE, tickets HERE.

Blackberry Daze. THROUGH AUG. 27. At Horizon Theatre. Secrets and seduction stun a small Virginia town at the end of World War I, when a provocative gambler (TC Carson) works his magic on three unsuspecting women. Adapted by Ruth P. Watson and Thomas W. Jones II from Watson’s novel Blackberry Days of Summer. The blues score is by William Knowles; Jones directs. $25 and up. 8 p.m. Wednesday-Friday; 3 + 8:30 p.m. Saturday; 5 p.m. Sunday. 1083 Austin Ave. NE (at Euclid Avenue). Details, tickets HERE or at 404.584.7450.

Cabaret. EXTENDED THROUGH SEPT. 3. At Serenbe Playhouse. Berlin. 1931. The Nazis are goose-stepping their way to power. The setting is the squalid Kit Kat Klub, where a young American writer (Lee Osorio) pursues English cabaret performer Sally Bowles (Molly Tynes) and everything is overseen by the androgynous see-no-evil, hear-no-evil Emcee (Serenbe artistic director Brian Clowdus). All Serenbe shows are performed outdoors. The score is by John Kander and Fred Ebb. The 1967 original won the Tony Award for best musical and made a star of Joel Grey. The 1998 version won the Tony Award for best revival of a musical and cemented stardom for Alan Cumming. $35 and $40; VIP seating extra. 8 p.m. Wednesday-Sunday. 10950 Hutchesons Ferry Road, Chattahoochee Hills. Directions HERE. Details, tickets HERE or at 770.463.1110. Discount tickets at PoshDealz.com.

The Hunchback of Notre Dame. THROUGH AUG. 27. Critics and audiences have heaped praise on this Aurora Theatre musical, staged in partnership with Theatrical Outfit. The show follows a deformed bell ringer named Quasimodo and his travails in 1482 Paris. Justin Anderson directs a cast led by Halen Rider as Quasimodo and Julissa Sabino as Esmeralda. $30-$65. 8 p.m. Tuesday-Friday; 2:30 + 8 p.m. Saturday; 2:30 p.m. Sunday. Aug. 22-24 shows are sold out; check other performances before you go. 128 E. Pike St., Lawrenceville. Free, covered, attached parking in city deck at 153 E. Crogan St. Details, tickets HERE or at 678.226.6222. (The Theatrical Outfit staging runs Sept. 7-17 at the Rialto Center for the Arts in downtown Atlanta.) Discount tickets at PoshDealz.com.

** Little Shop of Horrors. CLOSES SUNDAY. Actor’s Express provides a joyful, tuneful staging of this Skid Row-set cult musical about a nebbish botanist, his unrequited love, his cranky boss and a very hungry, very mean plant. The horror-comedy ran off-Broadway for five years in the 1980s, became a 1986 movie and was revived on Broadway in 2003. You might know the tunes “Suddenly Seymour” and “Somewhere That’s Green.” The cast is led by Juan Carlos Unzueta (the Piragua Guy from Aurora/Theatrical Outfit’s In the Heights) as Seymour, Kylie Brown as Audrey and William S. Murphey as Mr. Mushnik. $28 and up, plus taxes. 8 p.m. tonight-Friday;1 + 8 p.m. Saturday; and 2 p.m. Sunday. At the King Plow Arts Center in West Midtown, 887 West Marietta St. NW. Details, tickets HERE or at 404.607.7469.

An American in Paris. THROUGH SUNDAY. New to Atlanta and, by all accounts, one of the more gorgeous productions in the 2015 Broadway season. Playwright Craig Lucas (Prelude to a Kiss, The Light in the Piazza) updates the story from the 1951 Gene Kelly movie, setting it in 1945 at the close of World War II. The lush score comes compliments of George and Ira Gershwin — “I Got Rhythm,” “The Man I Love,” “’S Wonderful,” “Shall We Dance,” “But Not for Me,” “I’ll Build a Stairway to Paradise” and “They Can’t Take that Away From Me.” Nominated for 14 Tony awards, including best musical. Won for choreography, orchestrations, scenic design and lighting design. The first national tour makes its first stop in Atlanta at the Fox Theatre, under the aegis of Broadway in Atlanta. $30-125. 7:30 tonight; 8 p.m. Friday; 2 + 8 p.m. Saturday; and 1 + 6:30 p.m. Sunday. Details, tickets HERE or at 855.285.8499.

His and Hers Cabaret. SATURDAY ONLY. Stage Door Players presents a gender-bending benefit of music in which women sing songs usually sung by men, and vice versa. The lineup, subject to change, includes Paige Mattox and Bryant Smith of the just-closed Annie Get Your Gun, Daniel Burns, Sarah Cave, Kelly Martin, Jen MacQueen, Jeremy Wood and Laura Floyd Wood, among others. $20 in advance, $25 at the door. VIP tickets ($50) include a private reception, a bottle of champagne and reserved prime seating. 8 p.m. (VIP reception at 7 p.m.) 5339 Chamblee-Dunwoody Road in Dunwoody. Tickets, details HERE or at 770.396.1726. 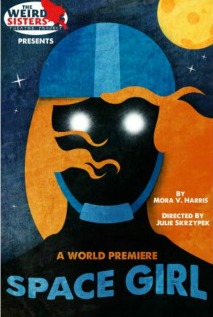 Space Girl. THROUGH SUNDAY. This world premiere finishes a brief run produced by the second-gen Weird Sisters Theatre Project (Shelli Delgado, Rachel Frawley, Kate Donadio MacQueen, Julie Skrzypek and Rebekah Suellau). The plot: Arugula just wants to fit in, but it’s not easy when you’re a teenage alien from the planet Zlagdor. In a world where the only things that make sense are roller derby and salad, Arugula and her father, Nancy, must find out what it means to be human before time runs out. This Mora V. Harris comedy was a finalist in the 2017 Alliance/Kendeda National Playwriting Competition. Skrzypek directs.  $20 plus fees. 8 tonight-Friday; 3 + 8 p.m. Saturday; and 7 p.m. Sunday. Alliance Theatre, 3rd Floor Black Box, 1280 Peachtree St. NE. Tickets at Brown Paper Tickets HERE. 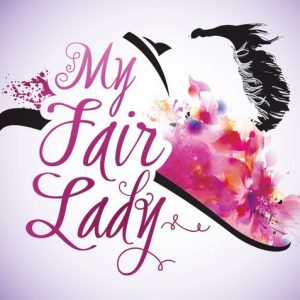 My Fair Lady. OPENS FRIDAY. Atlanta Lyric Theatre stages the Lerner and Loewe classic that turned George Bernard Shaw’s Pygmalion into an award-winning musical. You know the story: Pompous phonetics professor Henry Higgins turns Cockney flower girl Eliza Doolittle into a lady, with all sorts of complications along the way. The score includes “Wouldn’t It Be Loverly?,” “With a Little Bit of Luck,” “I Could Have Danced All Night,” “On the Street Where You Live” and “Get Me to the Church on Time,” among other gems. $26-$58, subject to change. Through Sept. 3. 8 p.m. Thursday-Saturday; 2 p.m. Sunday. Also at 2 p.m. Sept. 2. Cobb Civic Center, Jennie T. Anderson Theatre, 548 S. Marietta Parkway, Marietta. Details, tickets HERE or at 404.377.9948.

Another Mother. THROUGH AUG. 26. World premiere. Atlanta playwright G.M. Lupo’s script is the second entry in this summer’s Essential Theatre Play Festival. It follows the journey of a woman named Genevieve as she pieces together the identities and relationships of her biological mother, her birth mother and the mother who raised her. $20-$25. In repertory; check schedule HERE. Details HERE, tickets HERE. At the West End Performing Arts Center, 945 Ralph David Abernathy Blvd. 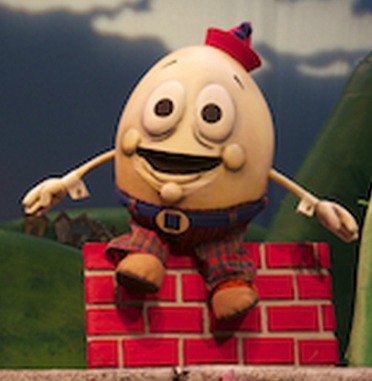 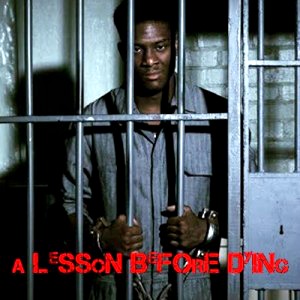