The Atlanta Musical Theatre Festival turns one in July with musicals that eyeball corrupt politicians, flip an Ovid myth and dig into the biblical stories of Mary of Nazareth.

The festival will run July 30-Aug. 1, with all shows at 8 p.m. at Out Front Theatre in West Midtown, says Benjamin Davis, its founder and executive artistic director. Tickets and other details will be announced as plans are finalized. Watch the AMTF website and social media channels (Facebook, Twitter and Instagram) for updates.

The Atlanta event, which introduced four new musicals its inaugural season, is modeled after the 13-year-old New York Musical Festival, which runs three weeks each summer and introduces more than 30 shows.

This year’s AMTF attracted more than 20 applicants, Davis says, including submissions from New York, Australia, New Zealand and Russia. The fest, which operates with a $15,000 budget, is designed to connect writers with producing theaters and directors who want to take a project further, and to create networking relationships among producing theaters, playwrights, directors, actors and other artists. This year’s musicals, in chronological order:

In the Middle of the Ocean 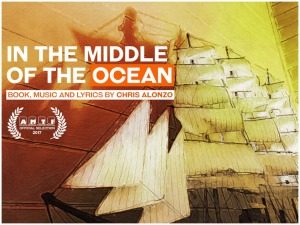 JULY 30  |  BOOK, MUSIC & LYRICS BY CHRIS ALONZO. Set in a brothel in the Atlantic Ocean. Alzono flips the script on Ovid’s Orpheus and Eurydice myth, making it a feminist anthem in which one woman must duel with the devil to win back everything. AMTF organizers call it “equal parts fiery rock concert and virtuosic storytelling” and “a dizzying theatrical experience spun against a backdrop of live indie rock tunes.” Profane jokes are promised.

JULY 31   |  BOOK & LYRICS BY BEVERLY TRADER AUSTIN, MUSIC BY BRYAN MERCER. Set in 1917 Claxton, Ga., where the Clugston family lives. The Clugstons are led by patriarch Commissioner John Clugston, a successful fruitcake manufacturer whose race for mayor is complicated by the behavior of his family and servants. An insightful servant named Phoebe pulls back the curtain on this mess of a family — replete with philandering politicians, corrupt businessmen, calculating metrosexuals and entitled young people. Everyone has a secret, and every secret threatens to explode. AMTF organizers describe Cakewalk as a “spicy satire with a melodically eclectic score.” 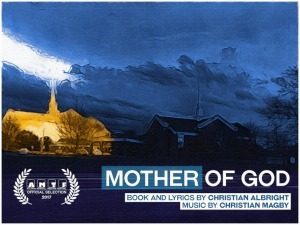 AUG. 1  |  BOOK & LYRICS BY CHRISTIAN ALBRIGHT, MUSIC BY CHRISTIAN MAGBY. The story of Mary of Nazareth and her journey, adapted from the gospels of Matthew and Luke. Mary, a believer, was called to accept the task of a lifetime. How could she know that bringing a savior into the world would introduce peril to herself and those she loved? Mary is called at a time when miracles were memories, God’s word was no longer present, faith and devotion were all that remained and a higher power seemed absent from the world.