IN THE SOUTHEAST, THE TREND KNOWN AS ‘GLAMOUR CAMPING’ CAN MEAN A YURT, A HOUSEBOAT, A LUXURY TENT AND EVEN YOUR OWN CONCIERGE.

ONCE WHILE CAMPING at a Florida beach and sleeping in a tiny pop-up tent with my husband, the wind woke us. It was after midnight, and air blasted in as I unzipped the opening and saw fast-moving clouds. After a day outdoors I was spent (and still slightly sand-encrusted), so I dropped my head back onto my microscopic camping pillow.

“I’m just going to sleep until something happens,” I said.

At that moment, our all of our outside gear blew into the water.

“Something happened,” my husband said.

What actually happened, I later realized, was that we hadn’t gone glamping.

[MORE: WHERE YOU CAN GLAMP AROUND THE SOUTHEAST]

Glamping is also called “lazy camping.” Everything to love about camping culture is there: nature’s beauty and the feeling of getting away from it all. The bonus is plenty of upgrades that usually are absent when you’re roughing it — throughout the country and the Southeast.

My beach camping blowout wasn’t unique. Many vacationers don’t, or won’t, camp because it can be difficult, dirty and uncomfortable. It might mean skipping a shower or sleeping in your clothes. Others don’t want to invest in copious amounts of camping gear or don’t have room in their VW Beetle to haul it. They want sheets with a thread count and a soft place to land where they can recharge their cellphones and themselves.

Tugaloo, less than two hours from Atlanta, rates nicely on the “getaway” scale. My friend Wendy and I were delighted with what we didn’t have to tote: no tent, no gear. We were told to bring our own linens, so I packed a fat feather pillow, a cooler, coffee and clothes. Wendy brought a kayak and stand-up paddleboard.

Glamping amenities vary from place to place. Some include private bathrooms. We knew ours didn’t, so upon arrival I checked out the facilities. The bathhouse with showers was sparkling, roomy and temperature-controlled. Carts stood by to haul our gear downhill to the yurt. So far, so great.

Our yurt was lakeside, with a private deck overlooking the water, and a level area with a grill, picnic table and firepit. Firewood was stacked by the front door, which locked. The yurt held two beds, a convertible couch, a solid table, chairs, and that most precious of commodities — electricity. Super convenient for charging a cellphone, computer or such life appliances as blenders (for margaritas) and CPAP machines.

The yurt was spacious, with smooth hardwood floors and a ceiling fan that turned on and off with the flip of a switch. It also included a lamp, game table and, for cold weather, a plug-in heater.

I didn’t relish the idea of a midnight trip to the shining bathrooms on the hill, but at least the path was paved, with muted lighting that came on after dark.

Glamping delivers on enjoyment and diminishes the time needed to set up camp. We had fun immediately: a relaxing sunset paddle on the lake, an outdoor fire that lit up the night as the sun dipped and woodland creatures that began their evening song.

A full moon rose over the water — a special one known as the Pink Moon, named for wild ground phlox, flowers that bloom in early spring throughout North America. The moonrise, more orange than pink, was magnificent, especially on the beach where trees couldn’t obstruct the view.

Later, tucked into a cozy futon, I almost forgot I was in a scaffolded tent. The woodland creatures still sang, leading me into sleep.

The next morning, in search of the coffee cups I’d forgotten — always check with your glamp-site on how equipped it is — I was stopped by two young deer who hopped into my path.

As if they understood, one bounced ahead and the other followed. I marveled at the simple thrills that Mother Nature supplies.

A lake. A fire. A sunset. A moonrise. A comfortable bed. A wildlife hello.

I was a happy glamper. 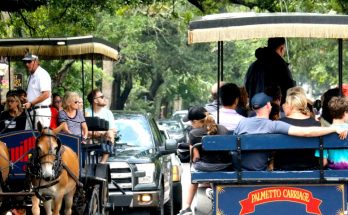