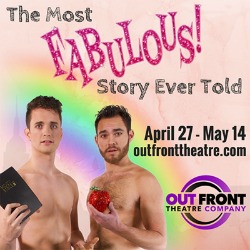 Out Front Theatre Company ends its inaugural season with The Most Fabulous Story Ever Told, a 1998 comedy from Paul Rudnick, inspired by the fundamentalist remark, “God made Adam and Eve, not Adam and Steve.” In Rudnick’s revisionist version of the Bible, God makes Adam and Steve, along with Jane and Mabel, the first lesbians. The foursome navigates the centuries together, encountering the gay animals on Noah’s Ark, a lesbian rabbi and a flamboyant pharaoh. The historical pageant eventually lands in present-day NYC. In writing about the off-Broadway original, The New York Times’ Ben Brantley said: “There’s reverence in Rudnick’s irreverence, an earnest warmth beneath the frivolity.”