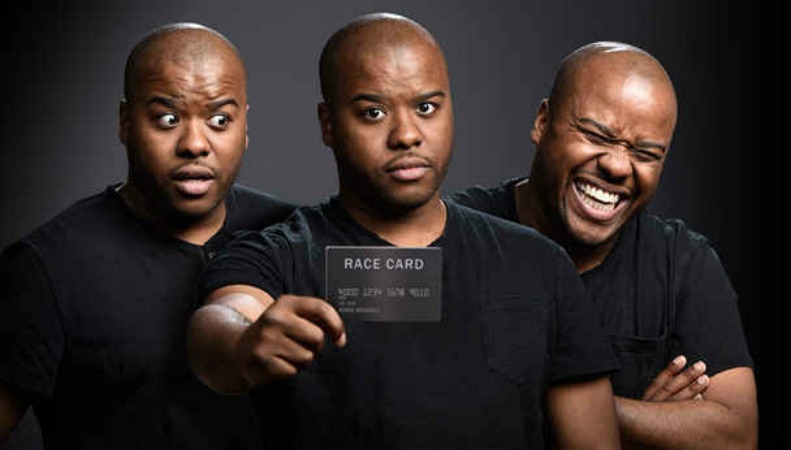 IMPROV ARTIST/ACTOR MARK KENDALL SHINES A LIGHT ON THE ‘MAGIC NEGRO’ STEREOTYPE. HE’S GOING FOR LAUGHS, OF COURSE, AND SOMETHING MORE.

YOU’VE SEEN the “Magic Negro” often, although once in a blue moon he’s a she.

Let comic Mark Kendall explain. He’s the “old black man in the movies. He teaches wisdom and has supernatural powers to guide the white male protagonist through the narrative.”

Whoopi Goldberg had the role in Ghost. Will Smith in The Legend of Bagger Vance and Hitch. Shaquille O’Neal in Kazaam, Eddie Murphy in Holy Man, Don Cheadle in The Family Man and Michael Clarke Duncan in The Green Mile.

Hollywood has used the Magic Negro character for more than half a century. Director Spike Lee is credited with branding it into current consciousness, during a 2001 Yale University lecture. With the “magical, mystical Negro,” Lee told the crowd, white screenwriters and directors “are still doing the same old thing … recycling the noble savage and the happy slave.”

In 2014, Kendall developed a one-man show centered on the trope. Dad’s Garage Theatre Company produced it late that year and Kendall continued developing the piece with the help of a 2015 Reiser Artists Lab grant from the Alliance. It gave him the chance to continue digging into ideas about the Magic Negro and raising questions about what the role means to audiences both white and black.

He’s been throwing bits away, tweaking others, writing new sketches and performing for audiences at improv theaters and Fringe festivals here, nationwide and in Canada.

The result is onstage in the newly titled (Kendall’s capitalization) The Magic Negro and other Blackity Blackness, as told by an African-American Man who also happens to be Black. It’s described as a “hilarious sketch comedy.”

The Magic Negro is the first Reiser lab project to get a full Alliance staging. Moxie, by Brian Kurlander and Lane Carlock and seeded in the Reiser’s inaugural year, had its world premiere in January 2016 at Theatrical Outfit.

The character of the Magic Negro has neither a past nor his own storyline. He’s folksy, good-humored, OK with subservience. He often possesses special insight or magical powers but exists solely to assist and enlighten a main character, always white and usually privileged.

Kendall, a Dad’s regular who also teaches improv classes there, has been looking forward to partnering with Anthony LeBlanc, who’s part of the Second City improv company in Chicago, and his director at the Alliance.

“Given the subject matter, I know he’ll push me in new directions,” Kendall says. “I’ve been a fan of his work at Second City for a while. Their sketch revues have what I want to achieve: a great combination of speed, hard-hitting punch lines and power.”

Kendall sees LeBlanc as “someone who is all about bringing ideas to the table and improvising to create fully flushed-out sketches.”

Kendall’s appreciation for Second City’s robust comedy heritage dates to his college years at Northwestern University. He returned to Atlanta after school and continued honing his comedy skills. In Dad’s recent original two-person sketch show U Up?, he had the audience howling from the get-go, even when he just stood still and looked perplexed.

What conclusions has Kendall drawn from the popularity of the Magic Negro character?

“Maybe that’s how certain people would prefer to remember black characters, like Uncle Remus in Song of the South,” he says. “Oh, well, he’s happy and singing, so things just couldn’t be that bad.”

“Oh, I like this actor Don Cheadle. Well, I don’t really like him, but he reminds me of my black friend. And this Don Cheadle has super powers, and he’s fun and I can keep him at arm’s length, I don’t have to know him on a deeper level.”

In some way, Kendall says, the Magic Negro provides “a sort of strange comfort.”

At one point in this process, Kendall stared into the audience, smiling big as he asked a question: “If I can keep smiling, then slavery couldn’t have been that bad. Was it?”

“I’ve tried it both ways,” he says. “Smiling and not smiling. When you have your audience laughing, you can get away with more.”

THE REISER ATLANTA ARTISTS LAB: HOW IT WORKS

The Alliance Theatre launched the Reiser Atlanta Artists Lab in 2013 to give artists a producing home for undeveloped work. Each year, after an open call for submissions, judges choose three projects. The artists on that project receive $10,000, rehearsal space and access to the Alliance’s artistic, educational a

nd production staffs. The Lab’s goal is to celebrate the breadth and vision of Atlanta-based artists, encourage collaboration and seed projects that will be produced in Atlanta. Look for showcases from the most recent winners in May.