HAMILTON IS COMING! Hamilton is coming!

Lin-Manuel Miranda’s singular, groundbreaking, multiple-award-winning musical about one of America’s Founding Fathers will run May 22-June 10, 2018, at the Fox Theatre, almost three years after it opened on Broadway.

Hamilton is one of nine shows in Broadway in Atlanta’s 2017/18 season and certainly the headliner. It’s part of the subscription series along with Rodgers & Hammerstein’s The King and I, The Color Purple, Love Never Dies: The Phantom Returns, a 20th anniversary tour of Rent and Something Rotten!

The Lion King and The Book of Mormon are season options.

Among them, the titles have accrued one Pulitzer Prize, 40 Tony awards and an additional 44 Tony nominations.

Subscriber packages start at $249 for seven shows and are on sale now. Tickets to individual shows are not yet available. For subscriptions and details, visit BroadwayInAtlanta.com or call 800.278.4447 (although phone lines have been overwhelmed). Performances generally run 7:30 p.m. Tuesday-Thursday; 8 p.m. Friday; 2 and 8 p.m. Saturday; and 1 and 6:30 p.m. Sunday but are subject to change.

Here’s a deeper dive into the season, in chronological order:

The King and I  | SEPT. 26-OCT. 1. Fox audiences have seen this Rodgers & Hammerstein jewel before but not this incarnation, created at Lincoln Center in 2015, directed by Tony Award winner Bartlett Sher (South Pacific) and featuring Kelli O’Hara, who won a Tony for her work as British schoolteacher Anna Leonowens. The story, set in 1860s Bangkok, follows the tempestuous relationship between Mrs. Anna and the King of Siam (as Thailand was then called). The score is packed stem to stern with brilliant melodies — “I Whistle a Happy Tune,” “Getting to Know You,” “Hello Young Lovers,” “I Have Dreamed,” “Something Wonderful” and “Shall We Dance,” among them. The New York Times called this staging, which won the 2015 Tony for best musical revival, “breathtaking and exquisite.” New York Magazine called it “too beautiful to miss.”

The Color Purple  | OCT. 24-29. What goes around comes around. This musical, based on the Alice Walker novel, began life at Atlanta’s Alliance Theatre in 2004, had a three-plus-year Broadway run in 2005/08, and was reworked and revived on Broadway in 2015. That production, the one Fox audiences will see, ran for two years and featured the Broadway debuts of Cynthia Erivo, who won a Tony for her Celie, and Jennifer Hudson. The New York Times called it a “ravishingly reconceived production that is a glory to behold.” The musical was running at 102 percent capacity when it closed Jan. 8 at Broadway’s 1,101-seat Bernard B. Jacobs Theatre.

Love Never Dies: The Phantom Returns  | NOV. 28-DEC. 3. A perfect holiday season balm, perhaps, for audiences that can’t seem to get enough of Andrew Lloyd Webber’s anti-hero. This sequel is set in 1907, about 10 years after Phantom of the Opera ends. An anonymous impresario invites Christine Daaé to perform at Phantasma, a new attraction at Coney Island. Daaé, husband Raoul and son Gustave journey to Brooklyn, not knowing that the invitation does, indeed, come from the Phantom. The show opened at the Adelphi Theatre in London’s West End in March 2010 and was substantially reworked nine months later. A subsequent Australian version, yet another reworking, was more successful. It has not yet seen Broadway.

The Lion King  | JAN. 10-28, 2018. Season package option. Can you feel the love, as millions of people worldwide have? This Tony Award-winning best musical features an Elton John-Tim Rice score (“Circle of Life,” “I Just Can’t Wait to Be King”) and the creativity (animal headdresses, puppets and visuals) of director Julie Taymor. The Lion King opened on Broadway in November 1997 and continues to play at 102 percent capacity at the 1,597-seat Minskoff Theatre. It won six 1998 Tonys, including best musical and best director (Taymor).

Rent  | FEB. 20-25, 2018. Jonathan Larson’s Tony Award-winning retelling of Puccini’s La Bohème won four 1996 Tony awards, including best musical, and ran for 10 years. Set in New York City’s East Village, Rent reflects the hand-to-mouth world of a group of artists/friends/lovers in the age of AIDS. In its original run, Rent was as groundbreaking as Hamilton is today. Larson died suddenly at age 35 the night before the show’s off-Broadway opening (it later moved to Broadway). He posthumously won Tony awards for best book and score of a musical, with such songs as “Light My Candle,” “Tango: Maureen,” “I’ll Cover You,” “La Vie Boheme” and “Seasons of Love.” Rent  launched the careers of Idina Menzel (who was Tony-nominated) and Taye Diggs. The is a 20th-anniversary tour.

A Gentleman’s Guide to Love & Murder  | MARCH 13-18, 2018. This 2014 best-musical Tony winner tells the story of Monty Navarro, an heir to a family fortune who sets out to jump the line of succession by eliminating eight pesky relatives who stand in his way. The Hollywood Reporter said the show “restores our faith in musical comedy.” An NPR critic said he’s “never laughed so hard at a Broadway musical.” The Broadway company famously featured Jefferson Mays as all eight of the doomed family members. Murder ran for three years and also won Tonys for direction (Darko Tresnjak) and costume design.

Something Rotten!  | APRIL 17-22, 2018. Meet brothers Nick and Nigel Bottom, two playwrights stuck in the shadow of that Renaissance rock star known as Will Shakespeare. When a soothsayer foretells that the next big thing in theater involves singing, dancing and acting at the same time, the brothers set out to write the world’s first musical. Time Out New York called this “the funniest musical comedy in at least 400 years.” The Broadway original, led by Christian Borle and Brian d’Arcy James, ran for almost three years and won a 2015 Tony Award for Borle, who played Shakespeare. At this moment, the national tour features Adam Pascal (Broadway’s original Roger Davis in Rent) as Shakespeare. 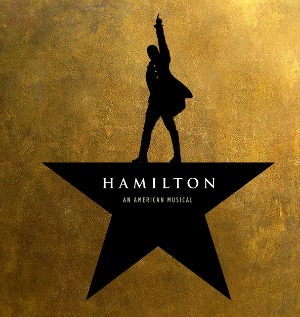 Hamilton  | MAY 22-JUNE 10, 2018. Lin-Manuel Miranda’s mighty musical, based on the Ron Chernow biography, follows immigrant Alexander Hamilton from destitution in the West Indies to America, where he rabble-rouses, works for George Washington during the Revolutionary War and becomes the new nation’s first Treasury Security. Miranda, who wrote the book, music and lyrics, blends hip-hop, jazz, blues, R&B, Broadway and rap in an epic story of America then, as told by a multicultural cast comprising America now. With Hamilton, Miranda’s imprint on American musical theater becomes as profound as that of Rodgers & Hammerstein and Stephen Sondheim. The show won the 2016 Pulitzer Prize for Drama and 11 Tonys, including best musical, book and score. It opened in August 2015 and continues to sell out (at 102 percent capacity) at the 1,380-seat Richard Rodgers Theatre, as it likely will for some time. Both Rodgers and Sondheim have Broadway theaters named for them. Hmmm. If you can see but one musical in your lifetime, this, arguably, should be the one.

The Book of Mormon  | JULY 17-22, 2018. Season package option. This musical has played the Fox before, but who doesn’t like a freshly scrubbed Mormon missionary? Hello! The New York Times called this Trey Parker-Matt Stone-Robert Lopez laugh-a-palooza “the best musical of the century” (that was before Hamilton came along). Follow the poignant and outrageous misadventures of elders Cunningham and Price, sent to Africa to spread the Good Word as best they can. “It is the kind of evening that restores your faith in musicals,” The Washington Post said. This musical pokes pointed fun at organized religion, homosexuality, stereotypes and musical theater conventions, among other targets. It won nine 2011 Tony awards, including best musical, book and score, and is into its sixth year on Broadway, still selling at 103 percent capacity at the 1,108-seat Eugene O’Neill Theatre. Note: Contains adult content that may not be suitable for all ages.